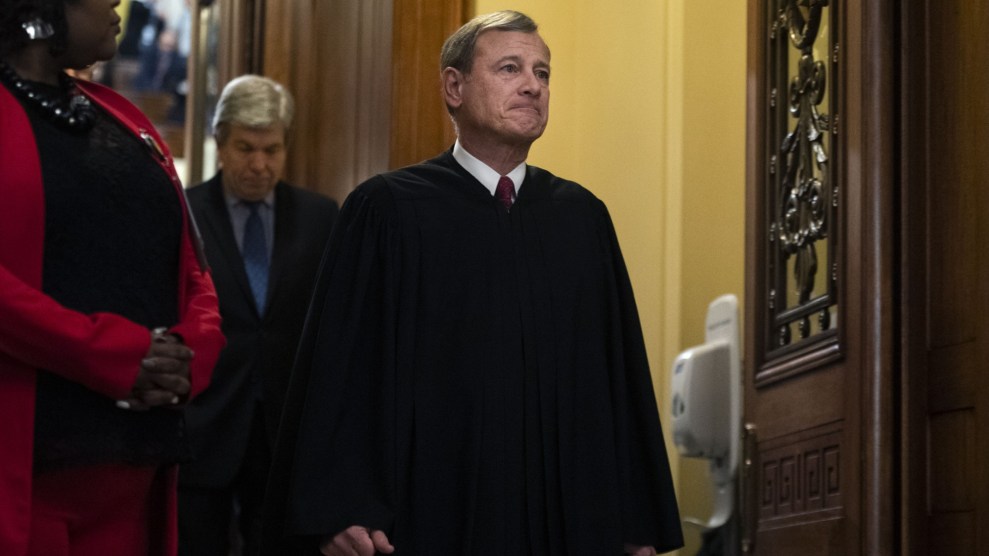 The Supreme Court on Friday rejected a Nevada church’s attempt to circumvent state limits on attendees at religious services during the coronavirus pandemic. Chief Justice John Roberts joined the court’s four liberal members in ruling against the church, which had said it was unfair for houses of worship to be limited to 50 attendees, while casinos in the state could still operate at 50 percent occupancy.

Roberts’ deciding vote sent right-wing Twitter, and at least two US senators, into a frenzy.

“John Roberts has abandoned his oath,” Sen. Ted Cruz (R-Texas) tweeted early Saturday morning. “But, on the upside, maybe Nevada churches should set up craps tables? Then they could open?” Cruz’s post included a screenshot of Justice Neil Gorsuch’s one-paragraph dissenting opinion, which said, “In Nevada, it seems, it is better to be in entertainment than religion.”

Roberts, a George W. Bush appointee, is no one’s idea of a #Resistance hero, but he has repeatedly angered conservatives by siding with the court’s liberal minority in certain high-profile cases. In 2012, he famously saved the Affordable Care Act by declaring it a tax. Last month, he joined a 5-4 vote to protect abortion rights (at least for now). And he recently wrote the court’s opinion blocking President Donald Trump from immediately ending the Deferred Action for Childhood Arrivals program.

Sen. Tom Cotton (R-Ark.), who said after the abortion case that Roberts was “apparently more concerned with liberal opinion than with doing the right thing,” had more sharp words for the conservative jurist following the Nevada church decision:

John Roberts at his hearing: “If the Constitution says that the little guy should win, the little guy’s going to win in court before me.”

What happened to that judge?

He didn't mention his belief that casinos have more rights than churches. https://t.co/KjpyLbkIMo

On a more conservative court, Roberts has increasingly become the swing justice, making him an easy target for right-wing purists. Rep. Doug Collins (R-Ga.), who is in the midst of a tight Senate race in Georgia with Republican Sen. Kelly Loeffler, called the Nevada ruling “another horribly disappointing” Supreme Court decision. Mike Huckabee, the former Arkansas governor and prime candidate for weirdest tweeter of the decade, had perhaps the strongest condemnation of Roberts on Saturday:

Thanks @realDonaldTrump for appointing Gorsuch. Too bad Chief In-Justice John Roberts is so swamp-infected that he protects casinos & punishes places of worship. He needs to retire, but first he just needs to repent! https://t.co/ZFjyvxTRn6

Trump himself was relatively muted about the decision on Saturday morning, and didn’t call out Roberts by name—even though he has not been reluctant to criticize the justice directly in the past. In 2012, he sent off a flurry of not-so-nice tweets in the aftermath of the Obamacare ruling:

John Roberts arrived in Malta yesterday. Maybe we will get lucky and he will stay there.

Congratulations to John Roberts for making Americans hate the Supreme Court because of his BS http://t.co/Vlyj8nKx

Since taking office, Trump has railed against the “Obama judges” who declare his policies unconstitutional, sparking a rare rebuke from Roberts and—inevitably—more tough talk from Trump. The president has kept the court high in Republican voters’ minds as a key issue for 2020, tweeting after the recent DACA decision about these “horrible & politically charged decisions coming out of the Supreme Court,” adding that conservatives “need more Justices or we will lose our 2nd. Amendment & everything else.”

On Saturday, in response to the Nevada ruling, he had a much more succinct message: “Win in 2020!!!”