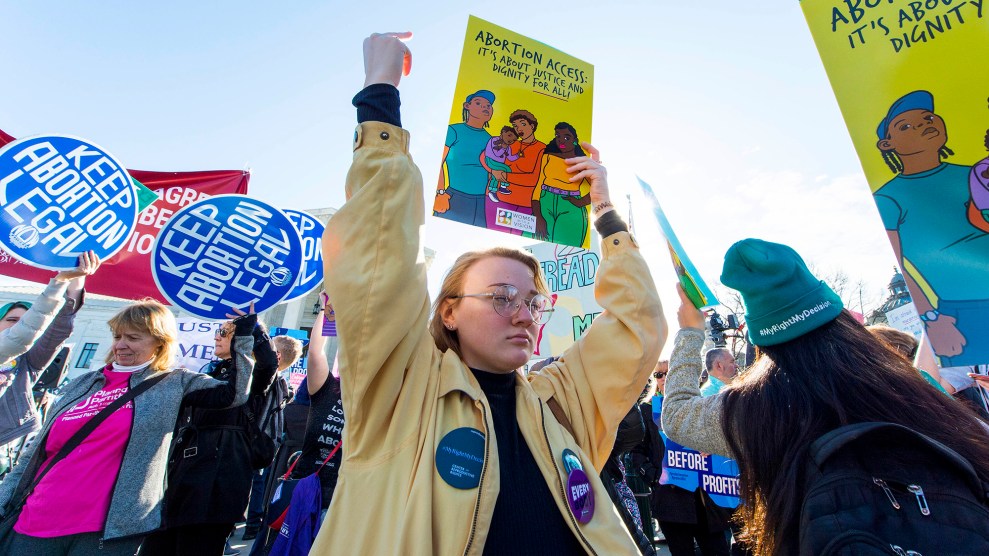 The Supreme Court just handed down a major win for abortion rights groups, striking down a Louisiana law that would have left just one doctor able to provide abortions in the entire state. The court ruled 5–4 with Chief Justice John Roberts siding with the court’s liberal wing.

June Medical Services v. Russo considered a law that required physicians who provide abortion care to secure admitting privileges at a hospital within 30 miles of their practice. This is what’s known as a TRAP—or Targeted Regulation of Abortion Providers—law, because it applies only to physicians who also provide abortion care and it’s medically unnecessary. A near-identical Texas law was considered in a major 2016 ruling, in Whole Woman’s Health v. Hellerstedt, which deemed admitting privilege requirements unconstitutional because they essentially created an undue burden on people seeking abortion access; the decision in June Medical affirms that precedent.

Abortion rights activists were worried that the court may take a different approach to June Medical since Justice Brett Kavanaugh has since tipped the bench to a conservative majority. Last year, Kavanaugh defended the court’s decision to consider June Medical despite the Whole Woman’s Health decision because, he argued, the plaintiffs had not proven that the Louisiana restriction created a burden equal to the one in Texas.

Chief Justice John Roberts had been considered the potential swing vote in this case; legal experts have speculated that the consideration of his legacy after he leaves the bench might be enough to motivate him to tread carefully on such a hot-button issue, especially in an election year. It clearly was, as Robert explicitly says he joined the majority out of deference to the court’s previous decision—a decision he actually disagreed with. He wrote: “I joined the dissent in Whole Woman’s Health and continue to believe that the case was wrongly decided. The question today however is not whether Whole Woman’s Health was right or wrong, but whether to adhere to it in deciding the present case.”

Another significant matter at stake in June Medical was the issue of third-party standing, a more obscure but crucial legal provision that has allowed abortion providers to bring suit in place of abortion patients for nearly 50 years. In its decision, the court declined to rule on the issue, meaning third-party standing will remain in place and abortion litigation can continue as it has for decades—another significant win for abortion rights advocates. As my former colleague Jessica Washington and I reported back in February:

Now the Louisiana law is officially dead. But this loss will not deter states from continuing to pass anti-abortion legislation in hopes of getting another shot at the Supreme Court and a potentially different outcome.