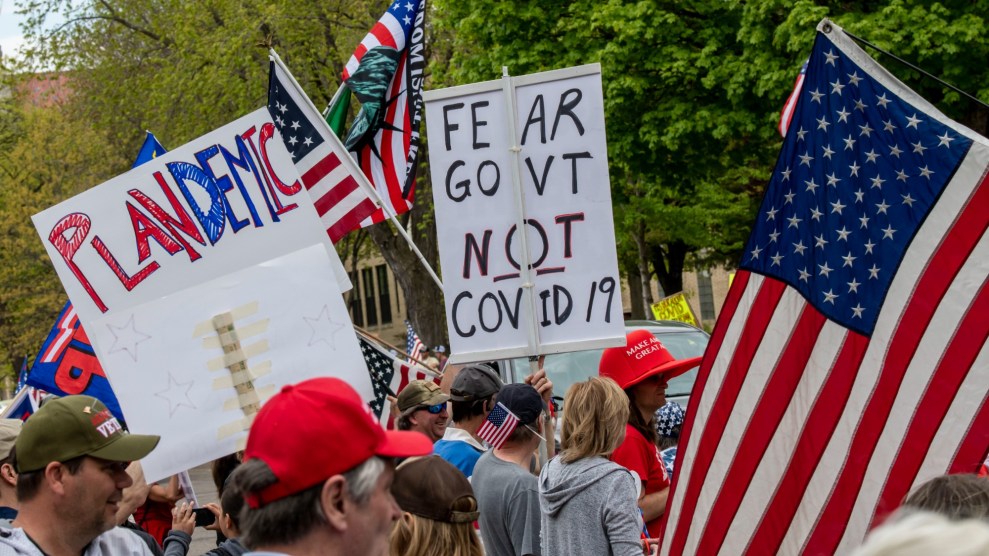 The discredited researcher behind “Plandemic”—a viral video that falsely suggests the coronavirus is “activated” by face masks, amid other bizarre claims—is set for a major revival this weekend. And you have the Sinclair Broadcast Group, which has drawn criticism for its ultra-conservative, pro-Trump programming, to thank.

On the show America This Week, which is distributed to hundreds of local news stations operated by Sinclair, host Eric Bolling interviewed Judy Mikovits, the virologist whose wild assertions about the coronavirus and infectious diseases expert Dr. Anthony Fauci are at the center of “Plandemic.” The interview, which was first reported on by liberal watchdog group Media Matters, included chyrons asking, “Was COVID-19 Created in a Lab?” and “Did Dr. Fauci Create Coronavirus?”

Sinclair is now airing straight-up coronavirus conspiracy theorists (of "Plandemic" notoriety) across the country. A point of discussion was whether Fauci created covid himself. Unspeakably irresponsible. More via @mmfa @zpleat here: https://t.co/eNUC2AyWMu pic.twitter.com/cZSrkkQQ52

Mikovits gained notoriety in May for her starring role in “Plandemic,” a 26-minute video asserting several misleading or false theories about Fauci and the origin of the coronavirus. The video, which was viewed more than eight million times in one week despite being removed from most social media platforms, is supposedly excerpted from a forthcoming movie, which aims to “expose the scientific and political elite who run the scam that is our global health system.”

Originally a chronic fatigue syndrome researcher, Mikovits has become an icon of the coronavirus-skeptic community for her outlandish allegations, including that a possible virus vaccine will “kill millions.” She also has carried a long personal grudge against Fauci, who she holds responsible for her personal downfall. In November 2011, Mikovits was arrested and charged with stealing property from her previous employer, a nonprofit medical research center in Nevada. The charges were ultimately dropped, but in “Plandemic,” Mikovits described the case against her as a vast government conspiracy spearheaded by Fauci. “He directed the cover-up,” Mikovits says. “And, in fact, everybody else was paid off, and paid off big time.” But, as the University of Pennsylvania’s FactCheck.org reported, “at no point in the video does anyone explain what Fauci supposedly covered up.”

In the interview with Bolling, Mikovits said Fauci “manufactured” the coronavirus at a military base in Maryland and “shipped” it to Wuhan, China. She cited no evidence. Bolling did not push back, only acknowledging it was a “hefty” claim—though Bolling insisted to CNN, that was him challenging her. He also told the network he was completely unaware of her role in “Plandemic.”

Sinclair, originally founded in Baltimore, has become one of the largest local television providers in the country and well known for its pro-Trump programming. Before he was dropped last year, former Trump adviser Boris Epshteyn sparked controversy for saying during a political commentary segment for Sinclair that migrants were mounting an “attempted invasion” of the United States; Sinclair apologized for the remark and eventually moved Epshteyn into a different role within the company. All this is particularly problematic since, as CNN notes, public opinion research shows more Americans trust their local news than media more broadly.