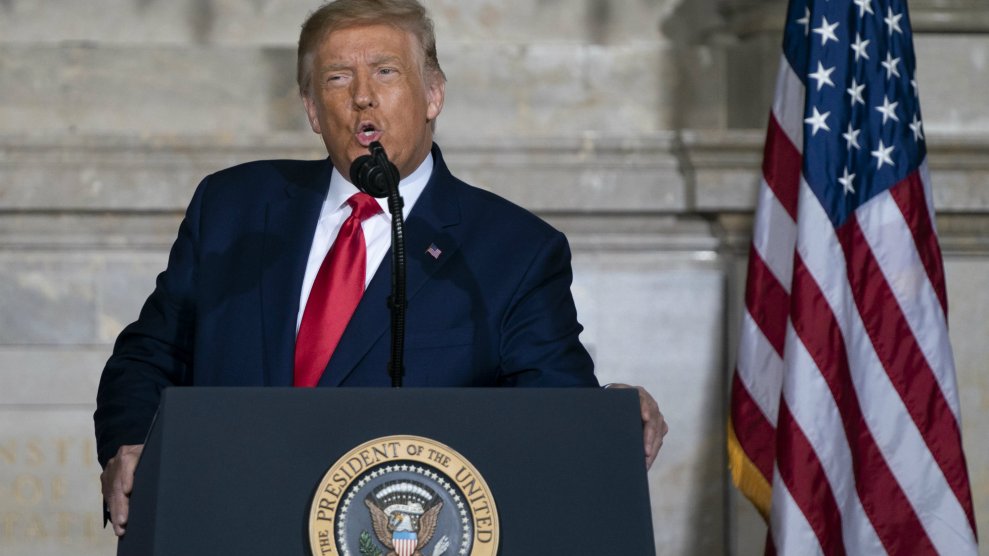 The United States has passed the milestone of 200,000 coronavirus deaths and the number is still climbing. Since the pandemic began, President Donald Trump has lied about the virus, downplayed its severity, and (in an impressive feat of scientific ignorance even for him) discouraged his followers and sycophants from wearing masks—even as his appointee to the CDC testified that absent a vaccine, a mask is the best way to protect yourself and everyone around you. But as the pandemic wears on and the election creeps closer, Trump—who has spent the last six months ignoring public health officials, when he’s not undermining and attacking them—is now using the possibility of a vaccine as a cynical election ploy.

Suddenly, the country’s science-denier-in-chief was making claims that a vaccine would be ready just in time for his re-election. “It will be delivered before the end of the year, in my opinion, before the end of the year,” Trump said at a rally in Pennsylvania earlier this month. “It really might even be delivered before the end of October.” From the outset, experts have warned that even though efforts are underway to create a COVID-19 vaccine at record speed, it would still take about 18 months to develop and test one, and then still more time to distribute doses around the country. Critics of the president, including his Democratic opponent, recognized the absurdity of the situation immediately.

“I trust vaccines, I trust scientists, but I don’t trust Donald Trump,” former Vice President and Democratic presidential nominee Joe Biden said last week. Trump’s response, since acknowledging science and the reality of the dire public health crisis is simply out of the question, turned valid criticism of him into a disingenuous smear: Biden, Trump announced, is an anti-vaxxer.

“They’re only doing it for political reasons, it’s very foolish.” Trump said at a White House briefing last week. “It’s part of their war to try and discredit the vaccine now that they know that we essentially have it.” The pattern of deploying multiple lies—there is no vaccine, Biden is not anti-science—is an attempt to disguise a larger truth: The president doesn’t know to attack his opponent.

“I think the vaccines can be very dangerous,” Trump said. “And, obviously, you know, a lot of people are talking about vaccines with children with respect to autism.”

Trump has played footsies with anti-vaxxers for years and endorsed the discredited idea that vaccines can cause autism in children. “I think the vaccines can be very dangerous,” he said during the 2009 swine flu pandemic. “And, obviously, you know, a lot of people are talking about vaccines with children with respect to autism.” Now, he wishes to declare that being anti-vaxx is bad and it was Biden who believed it all along. After all, for Trump, the vaccine was never about a responsible response to the pandemic, but a convenient talking point for his campaign.

For those keeping score at home, not only does Trump continue to insist that the virus will just magically disappear one day, he also suggested injecting bleach as a way to cure coronavirus, and pushed hydroxychloroquine, an anti-malarial drug, despite studies showing that it could be dangerous. The whiplash was almost painful. First Trump started telling the public that a vaccine would be available before election day. Then he insisted at a rally on Monday, “This virus affects virtually nobody.”

“The virus affects virtually nobody. It’s an amazing thing.”

Just curious, if the virus isn’t even that serious and would simply vanish, why does a vaccine need to be pushed out in record speeds? And if COVID “affects virtually nobody,” what about the 200,000 people who died?

The answer is simple. The president has been playing politics with the coronavirus all year. When the CDC attempted to warn the public about how severe the problem would be, Trump went apocalyptic, even though he knew the virus was far deadlier and more contagious than the flu, as revealed in a series of interviews he conducted with journalist and author Bob Woodward. Since then, the Trump administration has silenced its own government officials, meddled in the science, and created mass confusion.

Last week at a congressional hearing, Centers for Disease Control director Robert Redfield said masks may protect us more than a vaccine (because your immune system may not respond to the vaccine), and that a vaccine wouldn’t be available to the public until next summer or fall. Later that day, Trump said his CDC director was wrong about masks and the speed at which a vaccine would be available. “It’s just incorrect information,” Trump said. “When he said it, I believe he was confused.” And if that wasn’t enough to make it seem like the politicization of a coronavirus vaccine, the New York Times reported that Alex Azar, the head of the Department of Health and Human Services has barred the Food and Drug Administration from signing new rules about food, medicines, and vaccines. It’s unclear what that means for a possible COVID-19 vaccine, but Dr. Peter Lurie, a former associate commissioner of the FDA, described the move as “a power grab.”

One of the many bleak aspects about the pandemic is that Trump has chosen to focus on vaccines, which may or may not work, while ridiculing the proven tools at our disposal: mask wearing and social distancing. And even while Trump’s meddling and insistence that a vaccine will be ready by the election is not helping him in the polls; it is eroding trust in government. Only 27 percent of Americans say they are confident in Trump’s judgement on a vaccine. And the latest grim milestone we’ve crossed will only make it worse.

As the death toll and the number of infected people continue to climb unabated, the response from the federal government has been dismal. There has been little in the way of economic relief, as millions face hunger and homelessness. There has been no national strategy on testing, tracing, and isolating the sick. There hasn’t even been the bare minimum: a moment of public mourning, even a ceremony, for the lives lost. After more than six months of the crisis and 200,000 families and communities irreparably broken, all Trump has to offer is inept political gaming and an illogical smear on his opponent.