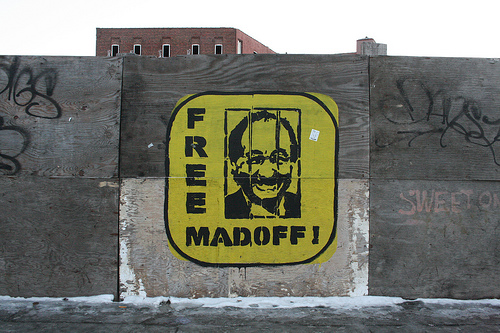 Used under a Creative Commons license from Flickr user Sabeth718

If there’s one way to close wounds in modern day America, it’s through reality TV. Even the most heinous individuals can build a following with some support from a cable network. And sadly, they can turn a profit too. For the thousands of Madoff victims out there who never want to hear the name Bernie Madoff again, I have a modest proposal that could resupply their empty IRA coffers with a fresh infusion of cash. People, listen to this: Think Oz meets Survivor meets Arrested Development. It’s the stuff of genius.

Let’s follow Bernie as he paints signs at his new gig and talks about the days of old. Let’s watch him bitch about eating frozen peas. Admittedly, this idea came to me when I disgustedly read that Bernie has become a prison celebrity, and that his fellow residents in the Big House constantly ask him for autographs. (Somehow, just as he “excelled” in business, it appears that he’s doing pretty well in prison too…paying off the guards perhaps? Or just his fellow inmates?) Justice in the eyes of the law may involve paying restitution, but since $50 billion has just disappeared, why not use more creative means to help those victims who are otherwise SOL?