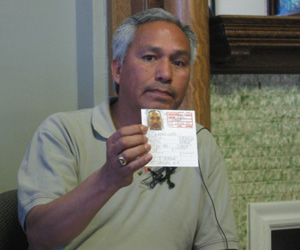 Photo courtesy of <a href="http://latinousa.kut.org/2009/02/12/fleeing-violence-mexican-journalist-seeks-asylum-in-us/">Latino USA</a>

Remember Emilio Gutiérrez Soto? He is the Mexican journalist Charles Bowden profiled in “We Bring Fear,” the feature story in our July/August drug war issue. The short version is that Emilio was forced to flee the Mexican Army and seek asylum in the U.S., where he was separated from his son and detained by the ICE for 7 months. He literally escaped from the Army by sneaking out the back of a grocery store and hiding out on a friend’s farm for 2 days before booking it to the border.

Needless to say, Emilio was unable to bring very much with him and lost nearly all of his possessions. After he was released from the El Paso Processing Center he joined his son in Las Cruces at the home of some kind friends. While he waits for his much-delayed asylum trial he has been unable to sell his home in northern Chihuahua, where the housing market has totally collapsed. To make matters worse he has still not been granted a work permit to legally make money here. This is a talented journalist, a regional bureau chief of the biggest newspaper in Juarez, and he can’t even work a menial job to pay for basic necessities like school supplies for his son. He is caught in a limbo between the violence of Mexico and the bureaucratic inhumanity of the U.S.

Molly Molloy, who played a huge part in reporting and translating “We Bring Fear,” and other good folks in the Las Cruces community are throwing a fundraising benefit for Emilio tonight. Please think about joining their efforts and sending a check to help alleviate the suffering while Emilio waits for his trial. If you believe in supporting journalism then there is no better way than supporting a journalist in his time of need.

If you cannot attend, but would like to make a donation, please send in care of:
Molly Molloy
New Mexico State University Library
Box 30006 Dept 3475, NMSU
Las Cruces, NM 88003