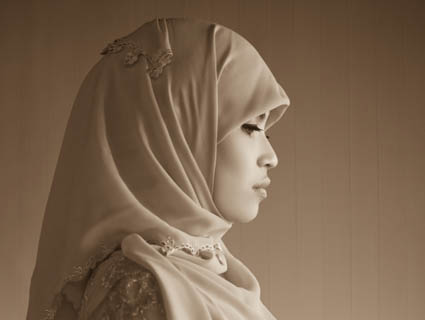 The last time she was called a terrorist, Eman* was drinking coffee in a to-go cup and waiting for the train at the Powell Street BART Station in San Francisco. It was rush hour, and dozens of morning commuters stood near the Mission High School senior from Yemen.

She froze in fear when an older commuter in a suit and tie started yelling at her for wearing hijab and drinking coffee. “Why do you drink this? This is not your culture,” she recalls him saying first. “Eat your own food if you want to wear the scarf!” The anti-Islam insults worsened, continuing until the train came, she says. Not one adult near her said anything to the man in the suit.

“Maybe they didn’t hear it?” I ask Eman, who today is wearing a light blue headscarf with silver stitching around the edges. “They heard it,” she assures me. “The man was yelling, and most people were looking at me. One person was even smiling.”

“Does this ever happen at high school?” I ask her. No, she says. It’s been years—since middle school—that she’s been insulted for being Muslim.

I’ve seen teachers at Mission High talk about Islam, hijab, and American intolerance. In one class I observed, teacher Amadis Velez showed his students an ABC news segment, “Witness to Discrimination: What Would You Do?” In the segment, ABC’s production crew sent two actors with hidden cameras into a bakery near Waco, Texas. One played a female customer, Sabina, wearing a hijab headscarf. The other played a sales clerk who refused to serve Sabina and shouted anti-Muslim and anti-Arab slurs. Mr. Velez paused the DVD to ask students the question: Did they think the real customers in the bakery would stand up for Sabina?

Only one student in Mr. Velez’s class of 23 immigrants thought Texan bystanders would stand up for a Muslim woman being verbally attacked.

Only one student in Mr. Velez’s class of 23 immigrants said yes.

They were right: In the ABC discrimination test, more than half of the bystanders did absolutely nothing.

Maybe it’s because, unlike the Mission High seniors in Mr. Velez’s class, more than 50 percent of Americans know little or nothing about Islam, the Pew Center found last year. Maybe it’s because high-ranking government officials—like House Homeland Security Committee chairman Peter King (R-NY)—spew the hateful lies that “Muslims aren’t “American” and “over 80 percent of mosques in this country are controlled by radical Imams.” (ThinkProgress’ Scott Keyes looked at the best research on the topic, and says that such claims are wrong.) Despite this, there is some silver lining for students like Eman: the number of reported crimes targeting Muslims nationally has gone down since the uptick post-9/11.

Meanwhile, Eman was accepted at San Francisco State University, where she hopes to study nursing. This week she’s working on an essay about life’s beauty for an 826 Valencia scholarship application, due soon. “What will you describe in the essay?” I ask Eman as she hunches over her draft. “My father. He passed away two years ago,” she says quietly, and keeps writing.

*Editors’ Note: This education dispatch is part of an ongoing series reported from Mission High School, where education writer Kristina Rizga is embedded for the year. Names of students are changed. Read more: What do Mission High students think about the Waiting for Superman documentary? Plus: Sign up for our weekly newsletter to get all of the latest Mission High dispatches.