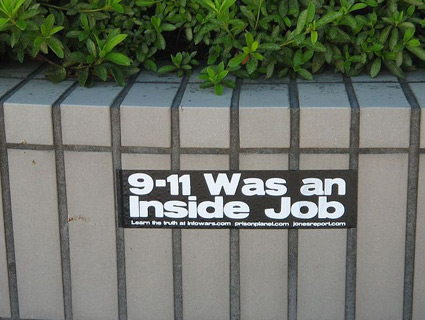 The website of Inspire, a English-language propaganda magazine believed to be run by Al Qaeda in the Arabian Peninsula (and spearheaded by the recently assassinated, tech-savvy cleric Anwar al-Awlaki), took a shot at Iranian President Mahmoud Ahmadinejad last week for intimating that 9/11 was an inside job. In an interview with the AP during his visit to the UN General Assembly last month, Ahmadinejad said that “[a] few airplanes without previous coordination known to the security forces and the intelligence community in the United States cannot become missiles and target the heart of the United States,” and also suggested that he, as a former civil engineer, believed it was entirely possible that the World Trade Center was brought down by a controlled demolition. (David Corn has a nice piece on the dangers of trutherism here.)

In response, an irate Al Qaeda op-ed writer took to the magazine’s website to push back against the notion that the Sunni militant group wasn’t the sole perpetrator of mass murder on 9/11. Abu Suhail, the article’s author, begins his rebuttal with (of all things) a blunt appeal to “logic”:

Why would Iran ascribe to such a ridiculous belief that stands in the face of all logic and evidence?…For Iran, anti-Americanism is merely a game of politics. It is anti-American when its suits it and it is a collaborator with the U.S. when it suits it.

Suhail goes on to write that the Iranian regime and Shiites are envious of Al Qaeda’s “success” and that they wish to “discredit Sept. 11 [with] conspiracy theories” because they only pay “lip-service to jihad against the Great Satan.”

Iran’s state-owned news network Press TV then fired back by regurgitating Ahmadinejad’s Truther-esque statements in a piece published on Thursday, which asserted that “reports released by al-Qaeda are usually believed to be produced by the US Central Intelligence Agency.” Here’s an excerpt from the article that reads like it was copy-and-pasted directly from a “Loose Change” video:

There is evidence indicating that once the twin towers were hit by the planes, their foundations were blown up so that they would collapse. The archive files on 9/11 attacks also suggest that the odds are that the Pentagon was struck by missile not plane…[T]here has been no convincing evidence that a number of young Arab people could have masterminded such attacks especially since they could have not known how to fly fully automated airplanes.

The Al Qaeda/Iran back-and-forth also serves as another example of how The Onion can pretty much predict the future. Remember the eerily prescient piece on George W. Bush reviving war, jingoism, and economic recession…published in January 2001? Well, here’s a video from early 2008 in which an Al Qaeda fighter debates a 9/11 conspiracy theorist:

“How would you like it if you spent, you know, two months in a moutain cave, sleeping on rocks, planning something really special, only to have someone take the credit away from you?”