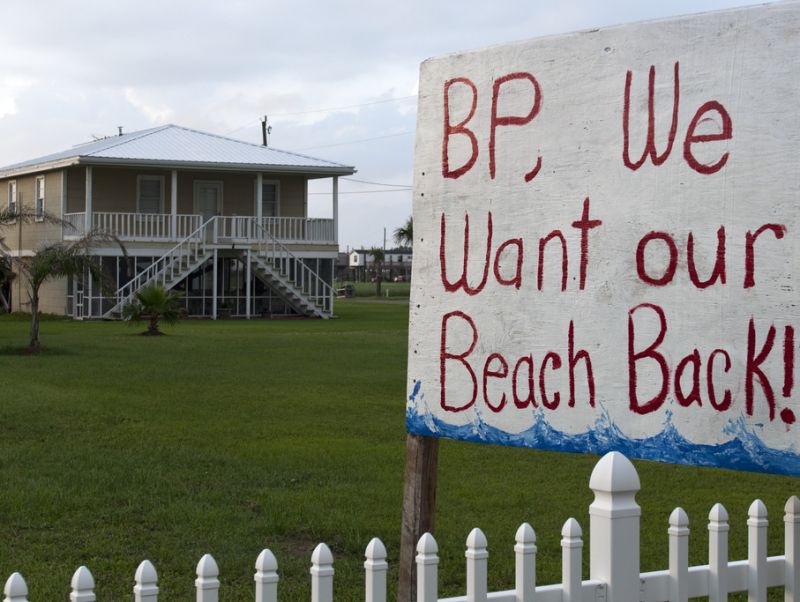 BP and the Department of Justice announced on Thursday that they had reached an agreement on a record fine stemming from criminal charges related to the 2009 Deepwater Horizon disaster.

BP pleaded guilty to 11 felony counts of misconduct and neglect related to the deaths of 11 workers on the oil rig, as well as one felony count of obstruction of justice for lying to Congress about the size of the spill. They also pled guilty to misdemeanor counts for violating the Clean Water Act and Migratory Bird Treaty Act.

But in exchange for the record fine, they won’t face any criminal penalties. The SEC charges deal with complaints that the company lied to investors about the size of the spill in its filings as well. (The US federal court still needs to approve the settlement.)

DOJ has also charged the company and two BP supervisors with manslaughter related to the deaths. CBS News explains:

A federal indictment unsealed in New Orleans claims BP well site leaders Robert Kaluza and Donald Vidrine acted negligently in their supervision of key safety tests performed on the Deepwater Horizon drilling rig before the explosion killed 11 workers in April 2010. The indictment says Kaluza and Vidrine failed to phone engineers onshore to alert them of problems in the drilling operation.

Another indictment charges David Rainey, who was BP’s vice president of exploration for the Gulf of Mexico, on charges of obstruction of Congress and false statements. The indictment claims the former executive lied to federal investigators when they asked him how he calculated a flow rate estimate for BP’s blown-out well in the days after the April 2010 disaster.

Regarding the $4.5 billion settlement agreement, some are wondering if it goes far enough in penalizing BP. The public interest group Public Citizen argues that the fine announced today is little more than a “slap on the wrist” for the company, since it does not include any penalties for the criminal charges beyond the fines. Tyson Slocum, energy program director at Public Citizen, says that the agreement should have included sanctions on the company—like barring it from future government contracts or from obtaining new leases.

As the Wall Street Journal reported during the spill, BP is “the single biggest supplier of fuel to the Department of Defense, with Pentagon contracts worth $2.2 billion a year.” That means that in two years, the US government pays BP just about as much money as the company has agreed to pay to settle the criminal complaint. In its announcement of the agreement, BP said it has not been advised of any intent to block the company from future contracts.

This is far from the first time BP has found itself in trouble with the law. The company previously paid record-breaking fines related to a March 2005 explosion at its Texas City refinery that killed 15 employees. And just a few days ago a subsidiary of the company was forced to pay compensation to Alaska for two 2006 oil spills on the North Slope.

In a press conference in New Orleans on Thursday, Attorney General Eric Holder said that the “criminal investigation remains ongoing,” leaving the door open for additional charges. He also indicated that he believes the settlement is significant. “This is unprecedented, both in terms of the amount of money, and that a company has been charged, and individuals have been charged as well,” Holder said. “I hope this sends a message to companies that would engage in this kind of wanton conduct that there is a price to pay.”

To be clear, this isn’t the grand total of what BP will have to pay out. The company still faces civil fines based on the number of barrels of oil spilled into the Gulf under the Clean Water Act, which alone could run it another $21 billion if the company is accused of “gross negligence” (which comes with a higher fine than regular “negligence” under the law). BP also faces fines based on the damage to natural resources—like the birds and turtles killed and the impact on fisheries. The company also faces separate lawsuits from cleanup workers and local residents impacted by the spill, as well as suits from several of its investors. That also does not include the money that BP agreed to pony up for a victim compensation fund shortly after the spill.

“This is a good down payment on the massive restoration needed for the Gulf’s ecosystems and the people and communities that depend on them.”

Holder indicated that DOJ and BP have been in negotiations but have not reached an agreement regarding the civil penalties. “We have not reached a number I consider satisfactory in order to resolve those civil claims,” he said. DOJ and BP will be back in court over those civil penalties in February 2013, he said. In his statement, BP Chairman Carl-Henric Svanberg said the company “will continue to vigorously defend itself against all remaining civil claims and to contest allegations of gross negligence in those cases.”

Conservation groups said Thursday that they hope the record fine is a good signal of what will come in the civil case. “This is a good down payment on the massive restoration needed for the Gulf’s ecosystems and the people and communities that depend on them,” said Larry Schweiger, president of the National Wildlife Federation, in a statement. “There’s still a lot of work to be done when it comes to penalizing the parties responsible for the Gulf oil disaster through the civil provisions of the Oil Pollution Act and the Clean Water Act, but this criminal settlement marks important progress and devotes much-needed resources toward restoration.”