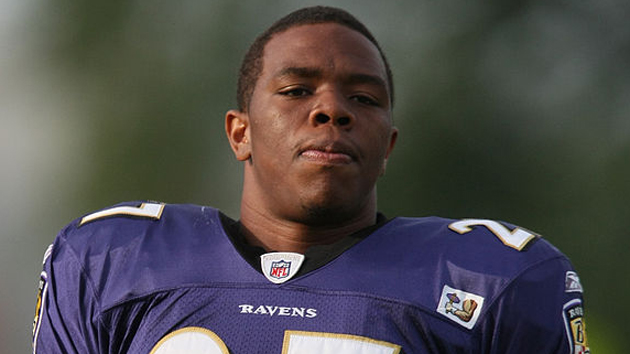 Update (9/10/2014): The Associated Press is reporting that a law enforcement source claims to have sent a copy of the tape to the NFL in April. The source played a voicemail for the AP from an NFL number on April 9 confirming receipt. “You’re right. It’s terrible,” the AP quotes the unidentified woman as saying.

Update (9/8/2014): Hours after TMZ released security video of Ray Rice punching then-fiancée Janay Palmer in a February incident in Atlantic City, the Baltimore Ravens announced today that they have terminated their star running back’s contract, and the NFL announced that Rice has been suspended indefinitely.

After several journalists covering the NFL reported in July that the league had seen this first tape, and that it would be used in weighing Rice’s punishment, the league and the Ravens reversed course, saying they never saw the tape until it was released today. As Deadspin‘s Barry Petchetsky wrote, “Whatever the case, it’s almost certain that the NFL lied at some stage here, and that the league played a handful of its most loyal reporters in the process, suborning them into a smear campaign against a victim of domestic violence.”

The news comes just as the league and the players’ union are trying to hammer out a new NFL drug policy.

The National Football League handed Baltimore Ravens running back Ray Rice an unexpectedly lenient punishment Thursday following his offseason arrest for assaulting his fiancée back in February: a two-game suspension for violating the league’s personal conduct policy. Rice allegedly hit Janay Palmer (now his wife) so hard she lost consciousness—and then security cameras caught him dragging her out of an elevator in Atlantic City. Aggravated assault charges eventually were dropped against both of them (Palmer allegedly hit Rice, too), and the two later held a bizarre joint press conference addressing the whole incident.

NFL commissioner Roger Goodell is known for being a strict disciplinarian, and the league goes to great lengths to project a family-friendly, squeaky-clean reputation. But many are outraged at Rice’s punishment. How soft is it, exactly? Well, here are six players who received harsher punishments than Rice—just for smoking weed.

There have been numerous calls for the NFL to ease up its marijuana punishments, based both on weed’s expanding legality and its potential use as relief for chronic pain. But the famously conservative league is unlikely to make a meaningful move anytime soon. Until then, there’s no reason to think the likes of Rice won’t keep having it better than pot smokers—unless the NFL learns from this unfolding PR disaster.