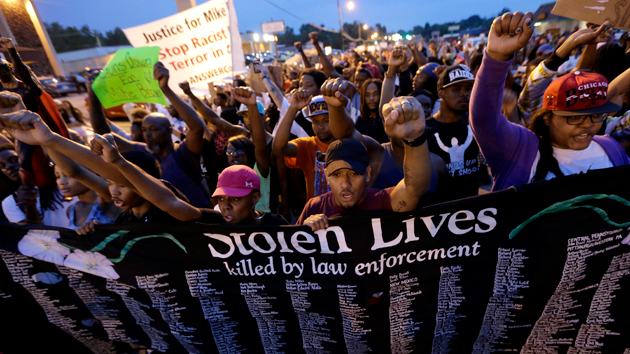 Amnesty International is best known for monitoring human rights conditions in places like Afghanistan and China—while active in the United States, it rarely makes headlines here. That’s why the sight of yellow-clad Amnesty activists walking the streets of Ferguson, Missouri, is attracting so much attention: It marks the first time an Amnesty delegation has been dispatched to monitor a human rights crisis unfolding on American soil.

Margaret Huang, deputy executive director of campaigns and programs for Amnesty USA, was in Ferguson earlier this week for what she called a “support mission” and says that Amnesty came at the request of the community. Huang and her colleagues did field trainings to educate protesters on their rights and how to respond to police. “The goal was not necessarily to produce a report, which is what Amnesty has typically done, but just to make sure things have been examined from a human rights angle and for people to understand international legal obligations,” Huang says. She says the response from the community has been overwhelmingly positive; the police, however, haven’t been as welcoming. On Monday night, police forced Amnesty observers out of the protest area at gunpoint.

Jesus Christ. Amnesty getting ordered out of #Ferguson by police. (Photo via @sdkstl) pic.twitter.com/7UvP1LlXc5

Amnesty began reporting on human rights in the United States in 1998, and it has since become just as vocal about conditions here as it is elsewhere. The organization’s 2013 report on the US is a laundry list of alleged human rights transgressions, including solitary confinement, detention of prisoners in Afghanistan and Guantanamo, drone strikes, and police brutality. This tweet about the situation in Ferguson sums up the organization’s angle:

While the nature of Amnesty’s mission in Ferguson is unprecedented in the United States, it’s not the first time delegations have been on the ground in times of crisis. After Hurricane Katrina hit, teams went to New Orleans to interview residents, with the purpose of producing a report detailing how government was failing in its recovery efforts. Amnesty also helped organize protests and raise awareness leading up to Troy Davis’ execution in 2011.

To find the closest parallel to what Amnesty is doing in Missouri, though, you have to look abroad. Huang says that Amnesty’s work during Turkey’s massive anti-government protests in 2013 most resembles the Ferguson mission. In Istanbul, activists gave medical assistance to injured protesters and observed the violent clashes involving protesters, police, and sometimes members of the press. They ultimately produced a huge report detailing the numerous human rights abuses carried out by Turkish police. Their concerns then—police brutality, harassment and detainment of the press—were also articulated in a statement about Ferguson.

What’s happening in Ferguson and what happened across Turkey last year aren’t the same, of course. But the similarities between the two situations—and the fact that Amnesty is in Ferguson in the first place—are, for many, making what’s unfolding now even more troubling. Huang didn’t say how long the delegation plans to stay in Ferguson, calling the situation “very fluid,” but Amnesty USA’s executive director, Steven Hawkins, is there now.