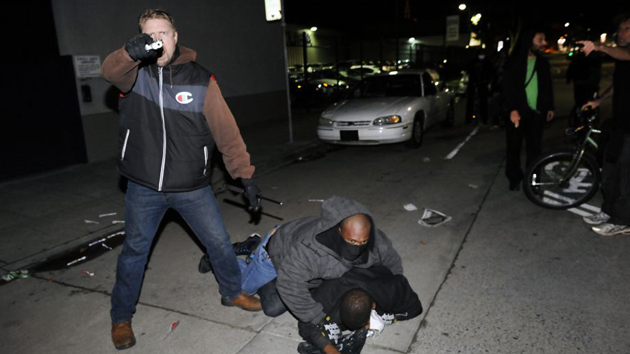 Over the past 24 hours, photos showing a plainclothes police officer pulling a gun on unarmed protesters in Oakland have gone viral. Tens of thousands of people, and news outlets like Gawker, Buzzfeed, The Guardian, and NBC have shared them, often including outraged comments. But there have been few accounts of what exactly happened, and how the incident came to pass.

I was one of the few reporters with the protesters at that point, around 11:30 p.m., and what I saw may add some useful context.

The protest was the latest in a series that have filled the streets of Berkeley and Oakland in the past couple of weeks in response to the lack of indictments for the officers who had killed Mike Brown and Eric Garner. (I covered most of them via Twitter.) Marchers generally remained peaceful. Sometimes they overtook highways and blocked intersections. Parents pushed strollers, students kept stride with older marchers, and people from all across the Bay Area joined in. But there was also infighting among the crowds, and breakaway factions looted stores, smashed windows, and burned trash cans. Police officers responded with tear gas, flash-bang grenades, and fired non-lethal bullets*, and their actions were often met with outrage. 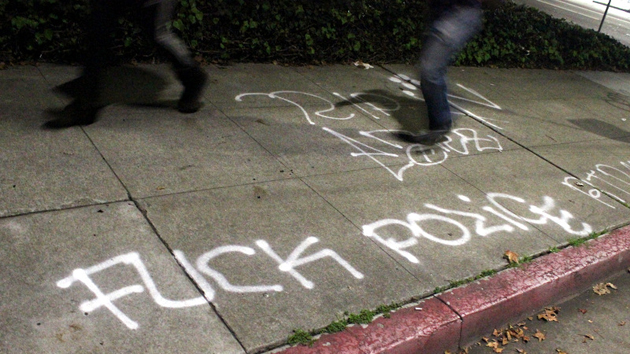 Wednesday night seemed as if it was going to end differently. Organizers with hoarse voices rallied the crowd of some 150 with updates on the movement that they said was building across the country. They presented a petition listing demands, including for Darren Wilson to be indicted and protesters who’d been arrested to be released without charges. Starting at the Berkeley campus, the group marched peacefully toward Oakland as a rainstorm approached. 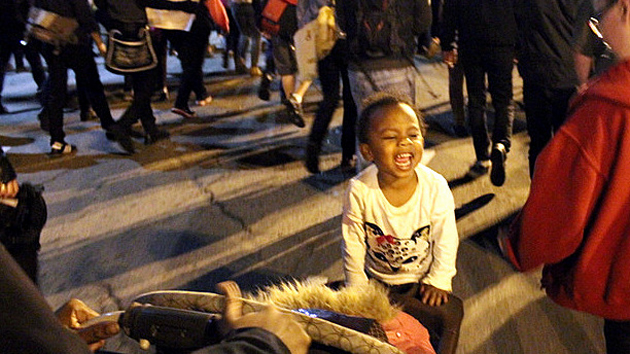 A little girl rides along on her stroller, chanting in a march last week. Gabrielle Canon

About 10:30 p.m., a small group from within the march broke windows at a T-Mobile store and smashed Bank Of America ATMs. Protesters blocked photographers documenting the violence, pushing us and putting their hands in front of lenses. 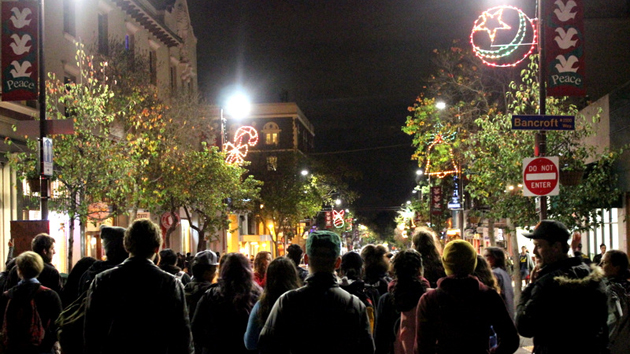 Shortly after this, police presence increased. Squad cars and white vans full of officers followed the march slowly as announcements rang out over a police intercom informing protesters that police were there for their protection and that their right to demonstrate was being respected. They also warned that any vandalism or violence would lead to citation or arrest.

According to reporter David DeBolt, writing for Inside Bay Area, officials say it was then that two undercover officers joined the march, both wearing dark handkerchiefs and hoods that covered their faces. I had not seen them earlier, and they did not appear in any of the photos I took. 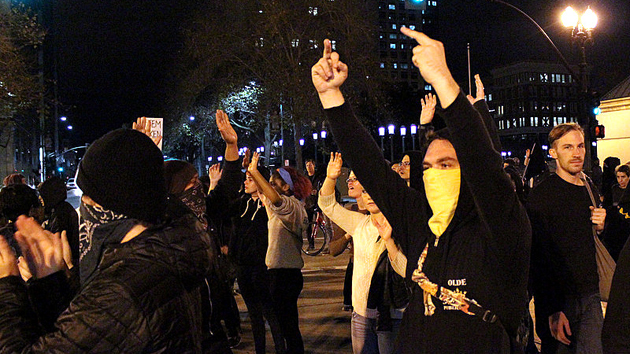 Suddenly, behind me, someone started to yell. A protester had discovered the undercover cops and shouted an alarm. Others began to join in, calling them pigs and telling them to go home. The two men passed me in silence, at a hurried pace. Suddenly, a scuffle erupted as one protester attempted to pull off one of the officer’s hoods. The officer tackled someone involved, and was quickly surrounded by a small crowd and kicked from several directions while on the ground. (That officer, who was African American, is who you see in the ground in the photo above.) The other officer stepped in front of his partner and brandished a baton. When the crowd did not back up he drew his gun, pointing at protesters and photographers. Moments later, police flooded the area, scattering marchers and blocking others, as the undercover officers arrested the man who had been tackled in the skirmish. 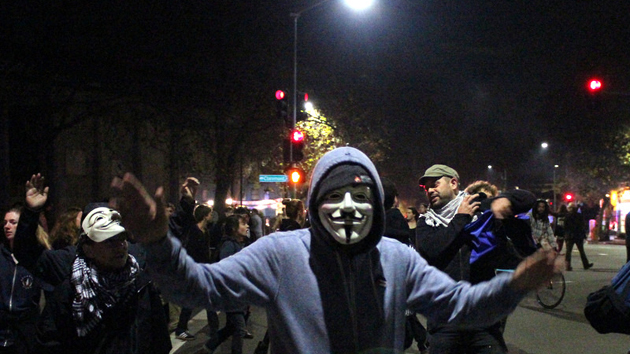 DeBolt reports the undercover officers were later identified as members of California Highway Patrol, assigned to follow the march on foot. They had been following in a vehicle providing information to stop protesters from blocking highways. Officials said in a press conference that the agency is investigating the incident, but believes the officers did what was necessary to protect themselves. They said that undercover cops had been deployed in prior protests and would be again, and that Twitter accounts had also been used to gather information.

The incident and photo have sparked anger and questions about police tactics in crowd control. Protesters are expected to resume marching over the weekend throughout the Bay Area and I will send out updates on Twitter as events unfold.

Correction: An earlier version of this article erroneously stated the location from which nonlethal bullets were fired. The language has been changed to fix the error.