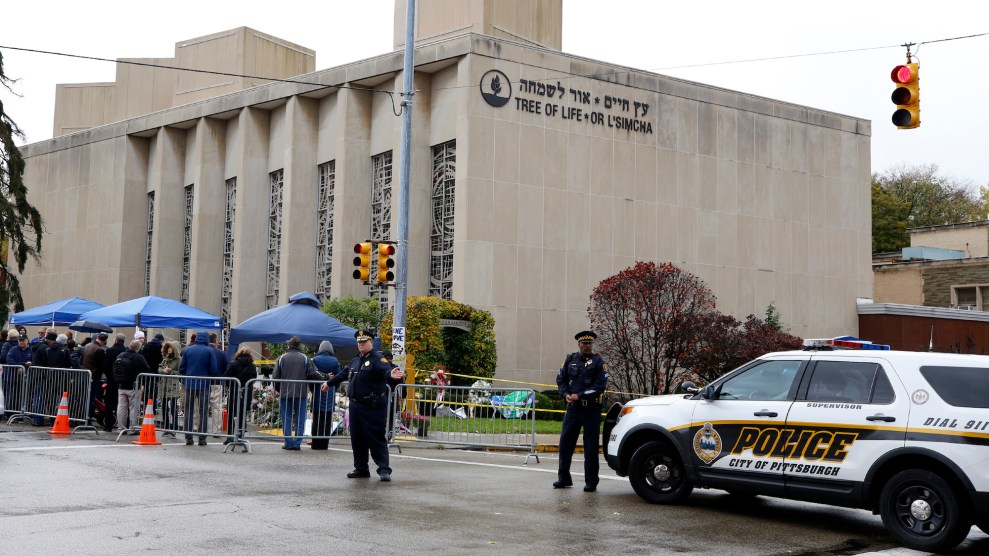 Pittsburgh police direct traffic as their vehicles close the street adjacent to the Tree of Life Synagogue during a memorial.Gene J. Puskar/AP

When federal agents searched the Washington, DC, house of two brothers they had linked to the suspected Pittsburgh synagogue shooter, they found a troubling scene.

There were hollow-point bullets, “ballistic vests and helmets,” a “marijuana grow” operation, and a Nazi flag. A noose dangled from a bunk bed, a small toy hung by its neck, and a flyer was found promoting the neo-Nazi organization known as Atomwaffen Division.

Prosecutors indicated that the contents of the house, detailed in a federal court filing submitted Thursday night, bolstered their fear the brothers might well have been bent on violence. Edward Clark, the younger brother, killed himself the day of the synagogue massacre in Pittsburgh, but Jeffrey Clark, according to federal prosecutors, had saluted the killings and fantasized about killing blacks and Jews himself.

On Friday, a grand jury in Washington returned an indictment charging Jeffrey Clark with one federal count of illegal possession of a weapon while using or addicted to drugs and one count of possessing high-capacity magazines. His attorney entered a not guilty plea on his behalf. Clark was arrested November 9 on weapons charges after his family contacted the FBI, fearing he might harm himself or others.

In an earlier court filing, the authorities said they had been told by Clark family members that the brothers were heavily involved in the white supremacist movement and “that they were connected with the Pittsburgh Synagogue shooter through Gab,” the online forum favored by many neo-Nazis. The federal authorities had initially claimed Jeffrey Clark had referred online to the synagogue killings as a “dry run” and suggested that might mean he had further information about the slaughter. In their filing Thursday, prosecutors appeared to amend that claim, saying it appeared Clark might have been referring to the failed bombing campaign directed at a number of liberal politicians. They make no claim either brother played a role in the planning of the attack.

Both brothers were also affiliated with another white supremacist group, Vanguard America, which was at the center of the violence in the 2017 rally in Charlottesville, Virginia.

The revelation about the Atomwaffen flyer comes a day after ProPublica and Frontline reported that Edward Clark, the younger brother who killed himself last month, may have been associated with the organization. Atomwaffen is thought to have scores of members around the country, and the anti-Semitic organization calls for a coming race war and encourages lone-wolf terror attacks like what happened in Pittsburgh. The group’s members or associates have been charged in five murders in the last two years.

“JOIN YOUR LOCAL NAZIS!” the flyer found in the house reads.

Frontline and ProPublica have been investigating Atomwaffen for a film airing Tuesday, exploring the group’s ideology and its efforts to recruit from the US military. Both brothers were also affiliated with another white supremacist group, Vanguard America, which was at the center of the violence in the 2017 rally in Charlottesville, Virginia. Many Vanguard America members ended up joining Atomwaffen in the months after Charlottesville.

As part of its ongoing investigation, Frontline and ProPublica matched an online handle, DC_Stormer, that prosecutors say was used by Edward Clark with one that also appears in secret chat logs for Atomwaffen. And a former member of the group said he recognized the handle.

Court filings Thursday reveal Jeffrey Clark to be an unemployed high school graduate, marijuana user, and self-avowed white nationalist ideologue who supports violence. In late October, he posted a statement online in seeming approval of the pipe bombs mailed to the offices of CNN and prominent Democrats including the Obama family, Hillary Clinton, and George Soros: “This was just a dry run for things to come.”

The post on Gab, the fringe social-media platform popular among some racists and extremists, was followed by another with praise for Pittsburgh shooting suspect Robert Bowers, whom he labeled a “hero.”

“Every last one of them deserved exactly what happened to them and so much worse,” he wrote.

After Clark’s arrest, prosecutors said in their filing, he agreed to talk and acknowledged his membership in white nationalist groups. Clark also reported that he and his brother became interested in firearms after the 2016 election as they thought a civil war was brewing.

When asked what motivated Pittsburgh shooting suspect Bowers, Clark told an agent: “He did it because he’s a white nationalist and he’s mad at Jews…I know why he did it, or I know why he claimed he did it, I saw the post and everything. He was upset with what…what he sees as Jewish groups destroying America based on what he saw from that caravan, the migrant caravan that was going on, and he decided he wanted to retaliate.”

Clark also told the FBI he “may or may not have” communicated with Bowers on Gab.

“I recognized the name and when I first heard about it, I saw the post and recognized the picture,” he said. “I will say unequivocally that I never had any interactions with him that I remember personally and I certainly never spoke…I said some very, very extreme stuff, I said some stuff that even like, you know, maybe like expressed like support of violence if certain lines were crossed, but I never told anyone to go do anything or ever issued any credible threat or anything like that.”

In discussing what he meant by “lines,” Clark said, “We should take up arms against the government if they take away our guns,” the filing said.

Prosecutors urged the court in the November 15 filing to keep Clark in detention pending trial. They said his “dry run” post on Gab was “clearly designed to convey a message that he and others who hold his views plan to commit future acts of violence.”

“The Court should not view this statement as simple hyperbole in light of the defendant’s access to weapons, possession of body armor, possession of high-capacity ammunition magazines, glorification of acts of violence, and proclamations that he was ‘committed to the survival of the white race by any means necessary,’” prosecutors said.

On Friday, a judge agreed, ordering that Clark remain in detention.