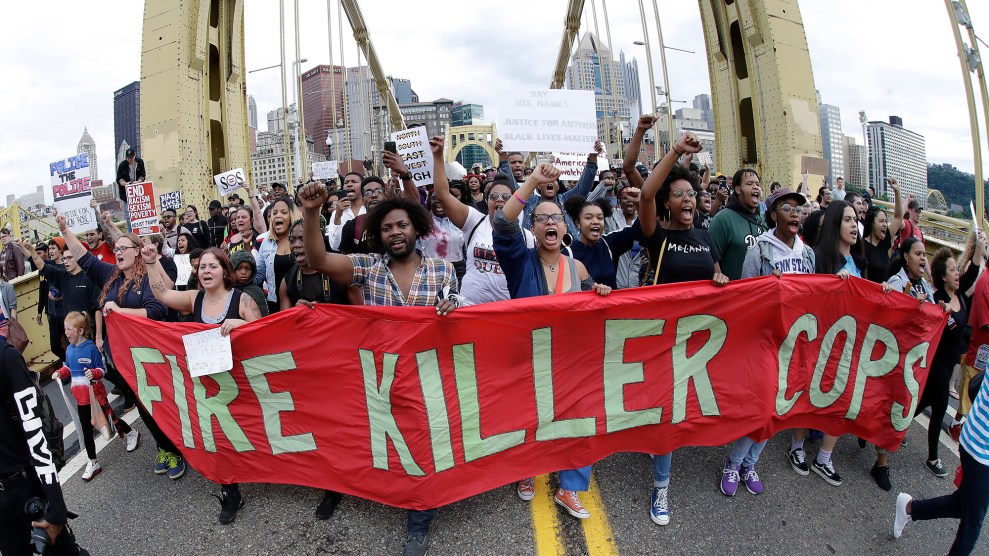 People march in Pittsburgh to protest the killing of Antwon Rose in June 2018. Gene J. Puskar/AP

Two months ago, Stephen Zappala Jr., the district attorney for Pittsburgh and Allegheny County, watched protesters take to the streets after his team failed to secure a homicide conviction against the former police officer who shot and killed Antwon Rose II, an unarmed black teenager, in 2018. Allegheny County, Pennsylvania’s second most populous, is known for having some glaring racial disparities in its criminal justice system, especially for teens. But for decades, Zappala has coasted to reelection.

Allegheny County, Pennsylvania’s second most populous, is known for having some glaring racial disparities in criminal justice, especially for teens.

Today, that could change. In a primary election, a reformist candidate has stepped up to compete against Zappala for the first time since 1999, shortly after the district attorney took office. Challenger Turahn Jenkins was Allegheny’s former chief deputy public defender and a former assistant district attorney, and says he wants to reform the bail system, reduce the number of people in the county jail, and make more use of diversion programs to treat offenders. There are no Republican candidates running in the primary, which means the winner of the Democratic race is likely to sail through the general election.

The outcome of the Antwon Rose case has loomed large in the campaign. In June 2018, Antwon, a 17-year-old high school student, was riding in the passenger seat of a car with another teen when they were pulled over by a police officer who suspected them of involvement with a drive-by shooting. Antwon, who was unarmed, ran from the car and was shot by the officer in his back, his face, and his elbow. A video recording captured the incident and was circulated widely online, sparking protests in Pittsburgh.

The officer, Michael Rosfeld, was charged with open homicide. In the trial in March, prosecutors from Zappala’s office made a case against him, but a jury acquitted the officer after less than four hours of deliberation. “It didn’t seem like they put forth enough effort,” Jenkins, who entered the race a couple of weeks after Antwon’s death, said of the prosecution. He questioned why they did not bring in an expert witness to discuss police use of force, and why Zappala himself did not take charge of the proceedings. The district attorney has defended how his office handled the case, saying that the trial attorneys had plenty of experience with homicide cases and that they attempted to secure an expert witness but found none to testify.

Antwon’s mother, Michelle Kenney, has endorsed Jenkins, who met with her recently at her request. Speaking at a candidate forum, she said she had been unable to secure a meeting with Zappala after her son’s death, and that his trial attorneys did little to comfort her after the jury decision. “Not one eye contact, not one pat on the hand. Nothing,” she said. (A spokesman for the district attorney’s office told the Pittsburgh-Post Gazette that Antwon’s family was rushed out of the courtroom too quickly to talk with them.)

Despite the outcome in Antwon’s case, Zappala has argued he has a track record of holding law enforcement accountable. During his campaign, he pointed to other instances when his office charged police who shot unarmed people in the back, including one where the officer pleaded guilty to involuntary manslaughter. He says he has pushed other progressive reforms, too, like reducing the use of cash bail and developing drug courts to connect people with treatment.

“I’m done with socialists…We have a very fundamental disagreement as to what the office of the district attorney is supposed to be,” Zappala said.

But huge racial gaps continue to be a problem for his office. A study by the University of Pittsburgh, citing 2015 data, found that black men in the county are booked into jail at roughly twice the national average for black men, who are already way more likely to be incarcerated than white men. And an investigation by the Appeal found that more than 80 percent of the children charged as adults by Zappala’s office were black in 2016 and 2017, even though black teens account for only about 20 percent of the county’s total youth population between the ages of 14 and 17. Asked about this disparity and whether his office would alter its practices, Zappala later said that racial gaps were often driven by issues outside his control, including poverty and a lack of affordable housing or health care. The “criminal justice system…plays its part in weaving the blanket of racial bias,” he told the Appeal, but “is merely one part of a vast and flawed complex adaptive system.”

Jenkins has won progressive endorsements, including from the local chapter of the Democratic Socialists of America, by pledging to tackle racial disparities. But he lost support early in the race after reportedly saying during a meeting with activists that he believed it was a sin to be gay or transgender. In recent months, some members of the LGBTQ community have decided to endorse him anyway, after he met with them and said he hoped to learn from the experience. “We believe it is important and commendable that those entrusted with power in an unjust justice system demonstrate an ability to recognize wrong in themselves and work to change, as he is doing and has done,” the Pittsburgh DSA said in a statement. It added that “his policies and stances reflect a commitment to push back against this system of criminal injustice, institutional racism, and mass incarceration.” (The DSA has had some success helping political newcomers win upset elections in Pittsburgh, including two socialists who secured seats in the statehouse last year.)

Zappala, meanwhile, is endorsed by powerful groups like the Allegheny County Labor Council, the Allegheny County Democratic Committee, and the Steel City Stonewall Democrats. In recent months, he declined to participate in two candidate forums, including one organized partly by the American Civil Liberties Union. “I’m done with socialists and ACLU forums,” he told the Gazette. “We have a very fundamental disagreement as to what the office of the district attorney is supposed to be.”