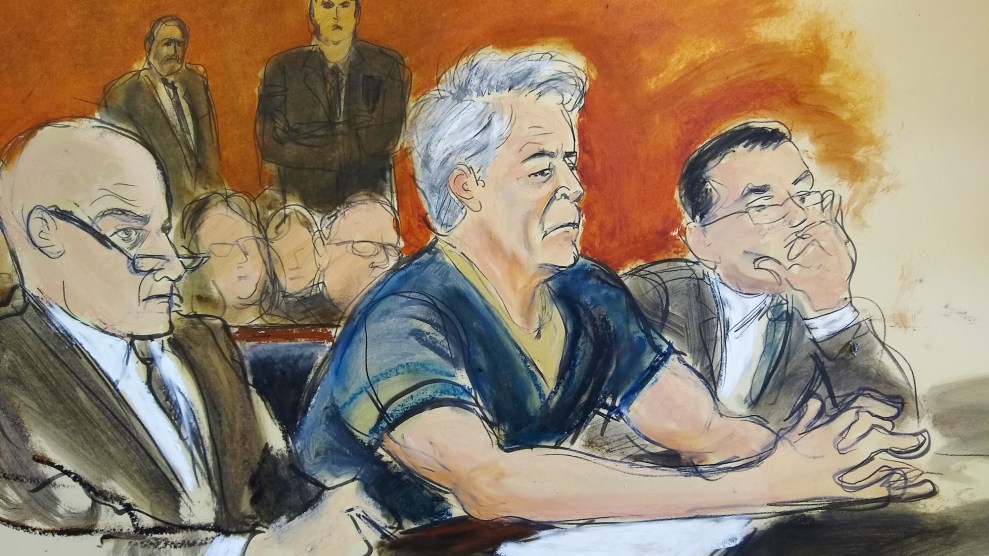 The night before Jeffrey Epstein’s apparent suicide, guards failed to monitor the disgraced financier as closely as required at the Manhattan jail where he was being held, the New York Times and Reuters are reporting. While the Metropolitan Correctional Center, where Epstein was detained pending trial on federal sex-trafficking charges, requires corrections officers to check on inmates every 30 minutes—and every 15 minutes for inmates on suicide watch—a source “not authorized to speak on the record” told Reuters those procedures were not followed overnight before Epstein was found hanging in his cell.

Citing an anonymous law enforcement official, the Times reported Sunday that Epstein was also allowed to be housed alone two weeks after being taken off of suicide watch, in violation of jail policy.

While the claims about the jail’s failure to keep watch over perhaps the most notorious prisoner in America have not been verified, they point to a grim commonplace of our carceral system: Time and time again, stories about incarcerated people in prisons, jails, or immigration detention centers reveal dangerous lapses in monitoring, even for inmates considered at risk of suicide.

In 2017, a guard at the private Stewart Detention Center in rural Georgia failed to check on detainee Jeancarlo Alfonso Jimenez-Joseph every 30 minutes as required under Immigration and Customs Enforcement standards, the Atlanta Journal-Constitution reported. Jimenez, 27, was being held in solitary confinement at the for-profit detention center, run by private prison operator CoreCivic. He had previously been deemed a “suicide risk” but was not on suicide watch when he hanged himself using a bedsheet. A state investigation found that an officer falsified documents to log visits to Jimenez‘s cell that never happened. (The officer was later fired.)

In 2015, Sandra Bland, who was jailed following a traffic stop in Texas, was found hanging by a plastic trash bag inside her cell after being left alone by Waller County jail staff for nearly two hours. According to The Guardian, Bland had notified officers during the booking process that she had previously tried to kill herself. A report from the Texas Commission on Jail Standards three days after Bland’s death noted that “visual, face-to-face observation of all inmates by jailers no less than once every 60 minutes” was required under the state’s minimum standards, but that guards at the county jail did not complete the required checks.

Damien Coestly had a similar experience before he killed himself in June 2015. Mother Jones reporter Shane Bauer met Coestly while working as a guard at Winn Correctional Center in Louisiana, which was also run by CoreCivic—then known as the Corrections Corporation of America (CCA). When Bauer met him, Coestly had been on suicide watch, but he was later downgraded to segregation, meaning that guards were supposed to check on him every 30 minutes, just like Epstein. Even then, he was not monitored as often as required, Bauer reported:

Coestly was put in a cell with an elderly man who was severely mentally ill, [the prison’s assistant chief of security] Miss Lawson told me. Unlike inmates on suicide watch, prisoners in segregation, or seg, were not supposed to be under constant watch. Guards were supposed to check on them every 30 minutes. An inmate who had been a few doors down from Coestly in seg later told me that he saw Damien taken out of his cell to make a phone call. Afterward, the prisoner heard Coestly tell a SORT officer he was feeling suicidal. The officer said he would return to get Coestly, but never did. Coestly repeated several times that he was going to kill himself, the inmate recalled. Miss Lawson said that according to prison policy, that should have gotten him automatically placed on suicide watch.

In their reports about the incident, Miss Lawson said, CCA’s SORT officers “covered up a lot of stuff they shouldn’t have.” She said video from the prison’s cameras showed that it had been an hour and a half since they had done a security check on Coestly’s tier. “If they had been going up and down the tiers like they were supposed to, then it wouldn’t have happened,” she believes. No Winn employees were ever disciplined as a result of the investigation, she said.

A CoreCivic spokesman later told Bauer he had his “facts wrong in this case” but declined to provide additional details.

Epstein may have been be vastly more famous than Bland, Jimenez, and Coestly, but the circumstances of his death, as reported by the Times and Reuters, seem to fit the same pattern: a known suicide risk, carelessness by guards, and a lapse in detention practices. It’s a different sort of conspiracy from some of the theories being bruited this weekend. In this case the body count is real.

If you or someone you care about may be at risk of suicide, call the National Suicide Prevention Lifeline, a free 24/7 service that offers support, information, and local resources: 1-800-273-TALK (8255).