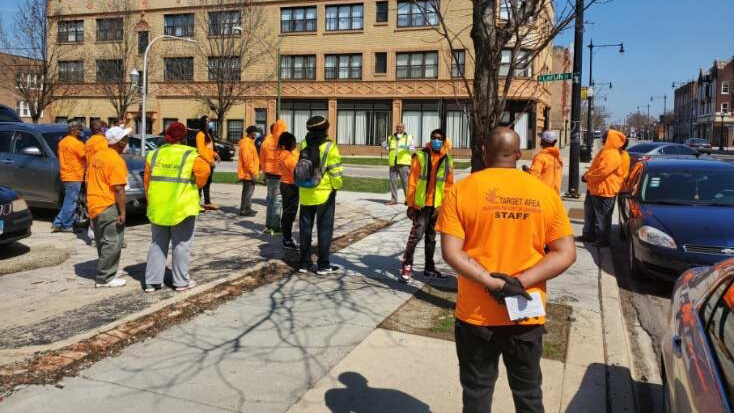 Street outreach workers from the Target Area Development Corp. on Chicago's South Side

On an unseasonably warm Tuesday in early April, 21 people were shot in Chicago. Seven of them died, the highest number of gunfire deaths the city had seen in one day since 2018. Given that Illinois was under a stay-at-home order, the violent flare-up seemed especially grim; among the wounded was a 5-year-old girl sitting on a front porch. The gunshot injuries put further strain on emergency rooms already dealing with an influx of COVID-19 patients.

Six of the shootings took place in Auburn Gresham, a neighborhood on Chicago’s South Side. The day after the bloody Tuesday, around noon, Joshua Coakley joined about two dozen outreach workers on a walk through the streets of this working-class neighborhood. They were on the lookout for local contacts, mostly gang members or former gang members who might have information about the shootings—or plans to retaliate.

Coakley, 43, grew up on Chicago’s South Side and once belonged to a gang himself. He’d been shot in the head when he was 17. His street cred served him well when he became a conflict mediator—he’s what criminologists call a “credible messenger,” someone with experience in gangs or prisons who has since changed his lifestyle and now tries to steer others away from violence. Today he works for Target Area Development Corp., a community outreach group, leading a team of credible messengers who regularly walk the streets. The workers get to know people who are at risk of violence, and help them find job training, food donations, educational services, and counseling. If a conflict flares, they try to help them resolve it before people get shot. Chicago’s outreach workers mediated 957 conflicts from mid-2018 to mid-2019, and the number of homicides in the city decreased during that period—with 13 percent fewer killings last year compared with a year earlier.

During the neighborhood sweep in early April, the job looked a little different. Coakley and his fellow outreach workers weren’t just trying to talk young guys out of retaliatory shootings; they also sought to convince them to wash their hands and stay inside.

Auburn Gresham, already one of Chicago’s most dangerous neighborhoods, is now reeling from the coronavirus. One section of the neighborhood has logged at least 487 infections so far, and for a while had more infections than any other zip code in the city. Mayor Lori Lightfoot deemed Coakley and about 200 other street outreach workers essential workers, sending them letters to show to police if they are stopped for being outside during their work. The hope was that, during their regular outings into their neighborhoods, they would continue to deter violence—and now they could also inform people about how to stay healthy during the pandemic. In the coming months, these workers are “going to be a lifeline for some of those communities,” says Dr. Ezekiel Richardson, an emergency-room doctor who is working with community organizations on the South Side to inform people about the disease.

These workers are “going to be a lifeline for some of those communities.”

As Coakley and his team paced up 79th Street the day after the shooting spree—wearing N95s and other medical masks, and orange hoodies to identify themselves—young men approached to ask what they were doing in Auburn Gresham. The outreach workers stepped back to stay six feet apart. Some of the men would ask questions like, “‘Why are you so far away?'” Coakley recalls. “It’s an opportunity to educate.”

In late March, after Illinois Gov. J.B. Pritzker issued a statewide stay-at-home order, people in Auburn Gresham and some other parts of Chicago were slow to respond. That may have been because of a lack of trust: In low-income communities that have long been undeserved by the government and health systems, it’s easy to be skeptical of the official line. “A lot of people didn’t really even believe it was real until we started hitting the street,” says Reggie Woods, an outreach worker in North Lawndale, a majority-Black neighborhood on the West Side.

Woods noticed crowds of young and middle-aged men continuing to socialize outside, often at the liquor store. Many of them doubted the need to go indoors; some even organized “quarantine parties,” sharing blunts and drinks in open disregard of the city’s orders. Rumors circulated on social media about the 5G towers making people sick, or the government injecting people with the virus. Some people told Woods they didn’t believe coronavirus was real, or thought only elderly people died from the disease.

Others have been “more flip or nonchalant about it, saying I’m gonna die anyway,” says Vaughn Bryant, executive director of Communities Partnering 4 Peace, an umbrella organization of street outreach groups in Chicago, including Target Area Development Corp and UCAN, where Woods works. Some men Woods encountered were convinced it was a white person’s disease, even though in many places, the virus has taken the biggest toll on communities of color. In Chicago, as of early April, about 67 percent of all people killed by COVID-19 were Black. (As of this week, it’s about 54 percent.)

Low-income, majority-Black neighborhoods on the South Side and West Side have seen such high infection rates in part because their residents have poor access to health care. In one survey, nearly a quarter of adults in Auburn Gresham said they didn’t have a consistent primary care doctor. “The reality is, community health workers don’t tend to go into the communities we serve, the most violent and impoverished,” says Bryant.

People in Auburn Gresham also have higher-than-average rates of diabetes and asthma—conditions that can be exacerbated by poverty, as well as air pollution from the nearby expressway. They are less likely than people in wealthier neighborhoods to have health insurance. And many of them live in cramped quarters with lots of family members, increasing the risk of spreading the disease. About half of these households lack internet, and many don’t have cable or other amenities that can keep teens occupied and less tempted to venture outside searching for something to do. This potent formula makes them even more vulnerable to serious complications from the coronavirus.

Street outreach workers see educating people about the coronavirus as a natural extension of their work dealing with gun violence, which they view as its own kind of public health epidemic. When Woods strikes up a conversation with a contact in North Lawndale, he’ll hand him a pamphlet from the city’s health department, and encourage him to stop sharing cigarettes or hugging friends, to stay at home. But there are hurdles. Some people have jobs they can’t do remotely, requiring them to take public transportation. Others work on the black market, selling drugs to make enough money to feed their families. Woods will sometimes point men like that to job postings and career training, and even offer them groceries and diapers for their kids.

“I need you to buy in to what’s going on, because it’s real.”

The day before the shooting spree, Coakley was scrolling through Facebook at his apartment in Englewood, another South Side neighborhood, when he noticed a post by an acquaintance nearby who had recently been released from prison. The man wrote that he didn’t want to stay inside, as the governor had ordered—he couldn’t stand being cooped up after 20 years behind bars. “I feel your pain,” Coakley recalled telling the man, in so many words, in a private message. “I understand what you’re saying, bro, but there’s gonna be plenty of opportunity for you to spread your wings, but right now ain’t a good time. I need you to buy in to what’s going on, because it’s real. Let me show you these statistics.” The man took down his Facebook post and agreed to stay inside. “He said, ‘You right, big bro. I’m not trying to promote our people dying. I was in my feelings.'”

“A lot of people have given up on themselves. Most people aren’t trying to hurt their people,” Woods says. He says more men in North Lawndale seem to be taking the pandemic seriously now; the crowds he saw near the liquor store last month have thinned out. People he approaches are asking him questions about the disease, even wondering where they can get masks and gloves for themselves.

But even as the message about the virus starts to stick, another beast again rears its head: Since the stay-at-home order went into effect, outreach workers with UCAN have documented an influx of shootings indoors, including one person who was shot during a dice game. In another case, a boyfriend killed his girlfriend at home, says Frank Perez, a program director with UCAN.

It’s too soon to know how the pandemic will affect gun violence levels. As in some other major cities, overall crime dropped in Chicago during March, including homicides, but shootings increased slightly. City officials are concerned about the toll on emergency rooms, especially after shooting sprees like the one that happened in early April.

“Violence of any kind is never acceptable,” Mayor Lightfoot said during a press briefing. “But…this is especially urgent now as our ability to treat all Chicagoans is being stretched to the breaking point. We cannot allow this to happen and we will not allow this to happen.” That surge coincided with a day of weather in the 70s, after a stretch of colder weeks. Some outreach workers worry about a spike in violence this summer, which is typical. “If you have hunger, a lack of income because people aren’t working, and everyone’s grandma is dead, plus kids aren’t in school, it’s a perfect storm,” says Richardson.

“We are on the front line, whether we want to take chances or not,” adds Coakley. An outreach worker on his team was recently infected and is now self-isolating. Coakley worries sometimes about bringing something back to his own home and his two young kids, 1 and 2 years old. “Because who wouldn’t prefer to stay at home? But we understand violence don’t stop because of the virus. These guys believe their beefs are ongoing.”