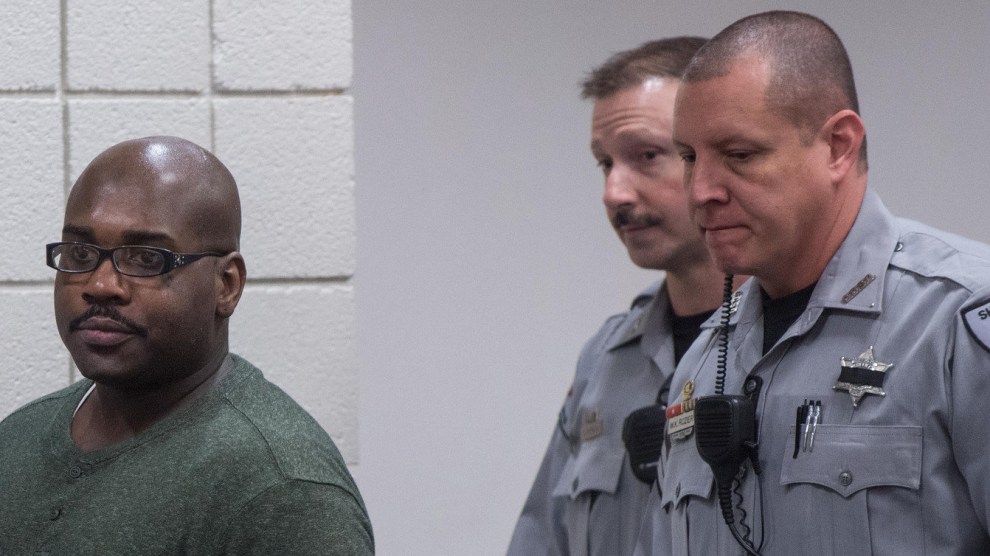 When lawyers in Cedric Hobbs Jr.’s 2014 death penalty trial in Cumberland County, North Carolina, began picking a jury, the pool was 50 percent black. By the time the trial began, there were only two black people on the jury. When the defense accused prosecutors of racial discrimination in the selection process, they acted indignant. “Somehow we’re just racists in this county,” one told the judge.

Prosecutors presented a range of justifications. One black man, according to court documents, “had once been a member of a gang in his youth.” Another was eliminated for singing “the sun will come out tomorrow,” a line from the musical “Annie,” as he exited court. The judge allowed the jury to stand.

In February, Hobbs’ attorneys argued at the Supreme Court of North Carolina that the selection process was part of a longstanding pattern in which prosecutors systematically exclude black people from juries, then argue race is not a factor. In briefs filed in support of Hobbs, a coalition of criminal justice advocates argued that implicit biases—the notion that people can hold prejudices without being conscious of them—”are no less entrenched and no less harmful to the criminal justice system” than overt racism.

Another was eliminated for singing “the sun will come out tomorrow,” a line from the musical “Annie,” as he exited court. The judge allowed the jury to stand.

On May 1, the court handed down its decision: it did not grant Hobbs the new trial his lawyers sought. But it found that the judge did not consider all the evidence of discrimination and told him to look again.

The North Carolina Supreme Court, which heard another case about racism in jury selection in August, isn’t the only one in the country reconsidering how race may affect jury selection. High courts in Washington, California and Connecticut have called for or implemented changes to address how implicit bias can keep black people off of juries unfairly.

The first state to do so was Washington, which in 2018 issued a rule requiring judges to consider “implicit, institutional, and unconscious biases, in addition to purposeful discrimination.”

Last December, the Connecticut Supreme Court followed suit by announcing it would appoint a special task force to study implicit bias in jury selection. The Supreme Court of California made a similar announcement in January. These developments come amid a sharpened focus in the criminal justice system on implicit bias.

Recent research has unveiled unconscious racism driving everything from police-involved shootings of black men to charging decisions made by prosecutors. Researchers have found that people are more likely to perceive black people as guilty, more likely to shoot them in police simulations and more likely to remove them from juries, even when their other demographics are identical to white potential jurors’.

At the core of recent arguments about racism in jury selection is the recognition that attorneys too often “rely on stereotypes like who is going to be sympathetic or not” says Catherine Grosso, a Michigan State University law professor who co-authored a seminal 2012 study of death penalty cases in North Carolina. The study found that black people were removed from juries at more than twice the rate of those of other races. The data undergirds Hobbs’ appeal there. “I think what we’re seeing is a recognition that even explicit racism doesn’t always have a smoking gun.”

The U.S. Supreme Court established the foundation for challenging racial bias in jury selection in 1986 in the case of Batson v. Kentucky. At issue were “peremptory strikes,” the limited number of opportunities prosecutors and defense attorneys have to remove jurors without having to explain why. The Batson decision forbade lawyers from using race as a basis for a peremptory strike. But from the minute the Batson decision was handed down, its critics—including Supreme Court Justice Thurgood Marshall, who nevertheless voted to support it—argued that the so-called “Batson challenge” process had a major loophole. To mount a Batson challenge, a lawyer—most often for the defense—argues that a strike is race-based. All opposing attorneys have to do is offer a reason that is supposedly race-neutral. Then the judge makes a ruling.

Attorneys too often “rely on stereotypes like who is going to be sympathetic or not.”

Potential jurors have been rejected for having dyed red hair, or wearing a large white hat and sunglasses. In 1995, the Supreme Court further said prosecutors need not even give “a reason that makes sense,” as long as the reason “does not deny equal protection.”

Stephen Bright, a Yale University law professor who has argued several Batson-related cases before the Supreme Court, says familiarity with prosecutors can affect the decisions judges make. “A judge who deals with prosecutors every day is not going to say, ‘You intentionally discriminated on the basis of race, and you lied about it with pretextual reasons.’”

In one Georgia case prosecutors systematically excluded black potential jurors by saying, for example, one was too close in age to the defendant (she was 34 and he was 19), and one had a son who had been convicted of “basically the same thing that this defendant is charged with” (the son stole hubcaps; the defendant was accused of murder). State judges allowed these reasons to stand until the U.S. Supreme Court overturned them.

In researching the Georgia case and several others, defense attorneys have uncovered trainings and manuals teaching prosecutors to invent plausible-sounding “race neutral” explanations for striking black jurors such as “appearance,” “lifestyle concerns,” living in a “high crime area.” In one Alabama case, the judge allowed the prosecutor to strike a black prospective juror because the prosecutor said he “looked like a drug dealer.”

But outside of extreme examples, prosecutors may not even realize that they are acting on the basis of prejudice. “The person who strikes doesn’t really know why they struck,” says Bright. “[Prosecutors may say to themselves,] ‘this is a young black woman, but she’s a school teacher. And I don’t like school teachers.’ Lawyers tell themselves they’re striking for other reasons.”

This is what makes implicit bias in jury selection so intractable.

Washington’s Supreme Court began to look at the issue in 2013 after it decided the case of Kirk Saintcalle, a black man convicted of murder after prosecutors removed the only black potential juror. The court ruled against Saintcalle, finding the prosecutor’s stated reason—the juror had recently lost a friend to murder—was good enough under Batson. But it sparked an internal reckoning. “Batson recognizes only ‘purposeful discrimination,’ whereas racism is often unintentional, institutional, or unconscious,” the judges found. “We conclude that our Batson procedures must change.”

“A judge who deals with prosecutors every day is not going to say, ‘You intentionally discriminated on the basis of race, and you lied about it with pretextual reasons.’”

Connecticut and California had similar reckonings in 2019, in which the high courts in those states upheld a strike as race-neutral under Batson and then declared that Batson is not good enough. “The Batson framework has proven to be wholly inadequate,” wrote Connecticut Supreme Court Justice Raheem Mullins in an opinion accompanying the majority’s.

The Washington rule passed in 2018 says the judge need not find purposeful discrimination. What matters is whether “an objective observer could view race or ethnicity as a factor.” It also includes a list of reasons that have long been allowed as “race neutral” but which judges should now assume are stand-ins for race, like receiving public benefits or “expressing a distrust of law enforcement.” The court hasn’t yet collected data on what impact the new rule has had on the racial composition of juries, says spokesperson Wendy Ferrell. Today, California lawmakers will hold hearings on a bill that has a similar list of reasons for excluding jurors that judges should assume are simply racism by another name.

For the North Carolina Supreme Court to follow Washington, Connecticut and California’s lead will require a substantial shift in mindset: In the 30 years since Batson was handed down, the court has never once found a violation against a juror of color.

That’s still true. In the Hobbs case, the high court said only that the original judge must re-examine evidence of bias. But David Weiss, a lawyer who worked with groups in support of the Hobbs case,* said he is hopeful the court will still create a working group to look at implicit bias. “It’s an option that we gave them,” he said. “The chief justice can take us up on that at any time.”

*A previous version of the story misidentified David Weiss as one of Hobbs’ attorneys. Weiss represented civil rights groups that filed amicus briefs in the case.