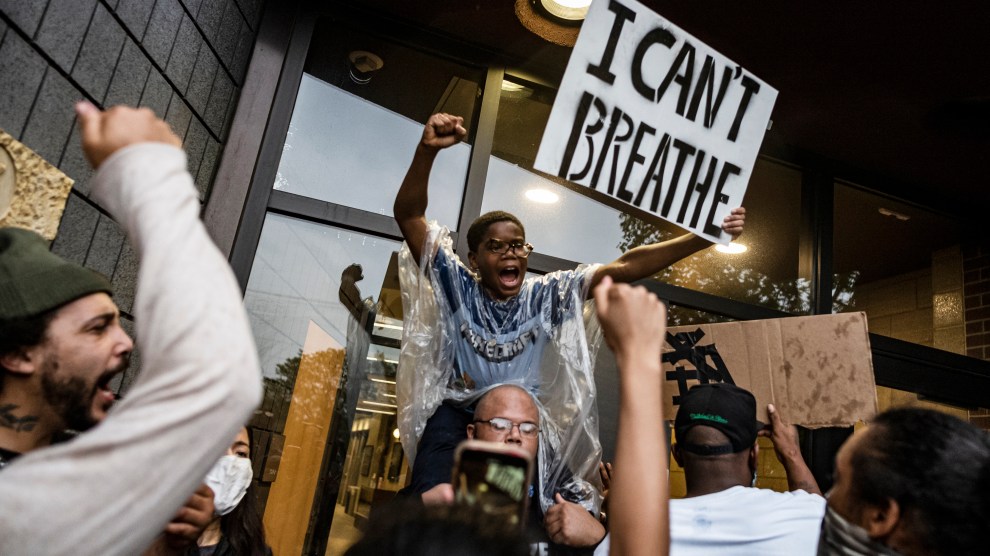 People at a police precinct In Minneapolis on Tuesday protest the death of George Floyd. Richard Tsong-Taatarii/Star Tribune via AP

On a quiet tree-lined street in the suburb of Oakdale, Minnesota, several protesters gathered Tuesday evening outside the home of Derek Chauvin, the white police officer who had suffocated a Black man named George Floyd during an arrest the day before.

“Show your face!” a protester shouted after knocking on Chauvin’s door. The windows of the home were shut. A police officer let the demonstrators know they could protest as long as they stayed off the property.

The small protest outside Chauvin’s home in the St. Paul suburbs might as well have been a world away from the chaotic scene unfolding that same evening in South Minneapolis, where Floyd’s arrest occurred. Police in riot gear fired teargas and flash grenades to disperse crowds of thousands of protesters, some of whom took cover behind shopping carts from a nearby Target.

Chauvin, like the majority of Minneapolis’ police officers, lives outside of the city he patrolled. Nationwide, the configuration is not that unusual. But this type of geographic gap has been a source of tension in efforts to reduce police violence against Black residents.

“When a police officer lives in a community that they are supposed to serve, they’re going to feel more accountable, they feel more ownership, they’re going to have those community connections,” Sam Sanchez, a community organizer, told the Minneapolis Star Tribune in 2017. “It’s a feeling of like, ‘These people are like us,’” Blong Yang, then a Minneapolis council member, told the newspaper. “There’s something to be said about that, when you can identify with them as humans and neighbors, and they’re not just hired guns that show up whenever the city of Minneapolis needs someone to enforce stuff.”

The issue is especially glaring in Minneapolis. Of the department’s 873 sworn officers in 2017, 92 percent resided in other towns, according to an analysis by the Star Tribune. By contrast, in 75 US cities with the biggest police forces, the average number of officers living outside the city where they worked was much lower, at 60 percent, according to 2010 data highlighted by FiveThirtyEight.

And Minneapolis police officers kill Black people at a rate 13 times higher than they kill white people— “a larger racial disparity than almost anywhere else in the nation,” according to Samuel Sinyangwe, a data scientist and policy analyst who co-founded Mapping Police Violence, which tracks data on police killings around the country. Black people make up about 20 percent of the population in Minneapolis but more than 60 percent of the people shot by police there from late 2009 to mid-2019.

“The truth is we do not have a good history,” Jamar B. Nelson, a longtime community activist in Minneapolis, told the New York Times this week. “The biggest complaint is that the community feels the Police Department is racist, bigoted and uncaring about the Black community.”

The cellphone footage of Floyd’s arrest is hard to watch. Chauvin and three other officers arrived outside the Cup Foods grocery store in South Minneapolis after getting a call about an alleged forgery. By the time Darnella Frazier, a bystander who filmed the encounter, came to the scene, Chauvin had already pinned Floyd to the ground by kneeling on his neck. Floyd, who was handcuffed, repeatedly said he was in pain and could not breathe.

Floyd’s nose began bleeding as his face pressed against the concrete, and Frazier and other witnesses pleaded with Chauvin to take his knee off Floyd’s neck. Soon, Floyd’s eyes closed and he lay motionless, but Chauvin did not remove his knee for minutes. As the bystanders urged someone to check Floyd’s pulse, another officer, who has been identified as Tou Thao, seemed to suggest that Floyd was not sober. “Don’t do drugs, guys,” he said to the bystanders. “Bro, he’s not even fucking moving!” one bystander said to the officers. “Get off of his neck!” Another asked, “Did you kill him?” Eventually, Floyd, unconscious, was loaded onto a stretcher and later pronounced dead.

“This officer failed in the most basic human sense.”

The next day, Minneapolis Mayor Jacob Frey condemned Chauvin’s use of force, which has drawn comparisons to the death of Eric Garner at the hands of police in New York years earlier. “Being Black in America should not be a death sentence,” Frey said during a press conference. “When you hear someone calling for help, you are supposed to help. This officer failed in the most basic human sense.” The four officers were fired, and the case is now under investigation by the FBI and the state Bureau of Criminal Apprehension. Minnesota Sen. Amy Klobuchar, a former prosecutor in the county where Floyd was killed, demanded “immediate action” in a statement on Twitter and described the killing as “yet another horrifying and gut-wrenching instance of an African American man dying.” On Wednesday, Frey called for criminal charges to be filed. “Why is the man who killed George Floyd not in jail?” he said during another press conference. “We are not talking about a split-second decision that was made incorrectly.”

Several police chiefs in cities around the country condemned Chauvin’s use of force against Floyd. “The actions I watched in the video were incredibly disturbing and and go against the basic law enforcement principle of preservation of life,” Michel Moore, chief of the Los Angeles police department, wrote in a statement.

Both Chauvin and Thao have been involved in other use-of-force incidents in the past, according to the Star Tribune. In 2008, Chauvin shot and wounded someone during a domestic assault call after the person reportedly reached for his gun. During his 19 years with the police, several excessive force complaints have been lodged against him, three of which resulted in reprimands from the department for his language and tone, according to the New York Times.

In 2017, Thao and another officer were sued for excessive force by a man who says Thao threw him to the ground and punched him after stopping him on the street for a search. After taking the man to a hospital, the officers escorted him to jail while he was only in underwear and a T-shirt, despite hospital staffers’ request to let him fully dress, according to the lawsuit. (In a deposition, Thao says he threw punches after the man’s hand slipped out of his handcuffs. The case settled out of court for $25,000.)

On Wednesday night, another protest formed outside Chauvin’s house, this time larger, with more than 100 demonstrators. Some protesters held signs reading, “Black Lives Matter.” On Twitter, activists pointed out how far Chauvin’s home is from Minneapolis. “Chauvin was commuting in not just from the suburbs, but from the suburbs ON THE COMPLETE OTHER SIDE OF THE METRO,” Minneapolis-based author Dianna Anderson wrote. “Heaven forbid we get back to the concept of officers living in the communities they police,” a grad student with the Twitter handle Hobbitlauncher tweeted. “That’s a huge step that should be taken ACROSS THE COUNTRY.”

In Minnesota and other states, police unions have pushed back against proposed residency requirements that would make it harder for them to live outside the cities where they work. In Minneapolis, police union members have argued that requiring them to move into neighborhoods where they patrol might hamper recruiting and make it harder to keep talented officers on staff. In 2017, Minneapolis Police Chief Medaria Arradondo said an officer’s hometown was less important than other factors. “I will take character over residency every day of the week,” Arradondo reportedly said at a community forum. “I don’t care if a person lives in Alaska.”

But it’s possible that living in the same community where they patrol could make officers more aware of racial injustices. A 2017 nationally representative poll by Pew found that 92 percent of white police officers believed the country had done enough to achieve racial equality, compared with 29 percent of Black officers, who are more likely to live in the communities they serve.

On Wednesday, miles from Chauvin’s home, police again responded with tear gas and rubber bullets as thousands of people protested a second night in a row in South Minneapolis. Some people set fire to an auto parts shop and looted stores. One person was fatally shot. The National Guard was deployed, along with officers from St. Paul and and the State Patrol. By Thursday morning, ash fell from the sky near the Target that had been raided. Fires continued to smolder and protesters remained on the streets, standing off against lines of officers.

As an investigation into Floyd’s death continues, his family can only grieve. Floyd, 46, was a father of two. “They treated him worse than they treat animals,” his brother Philonese told CNN. “And I wouldn’t treat an animal like that.”