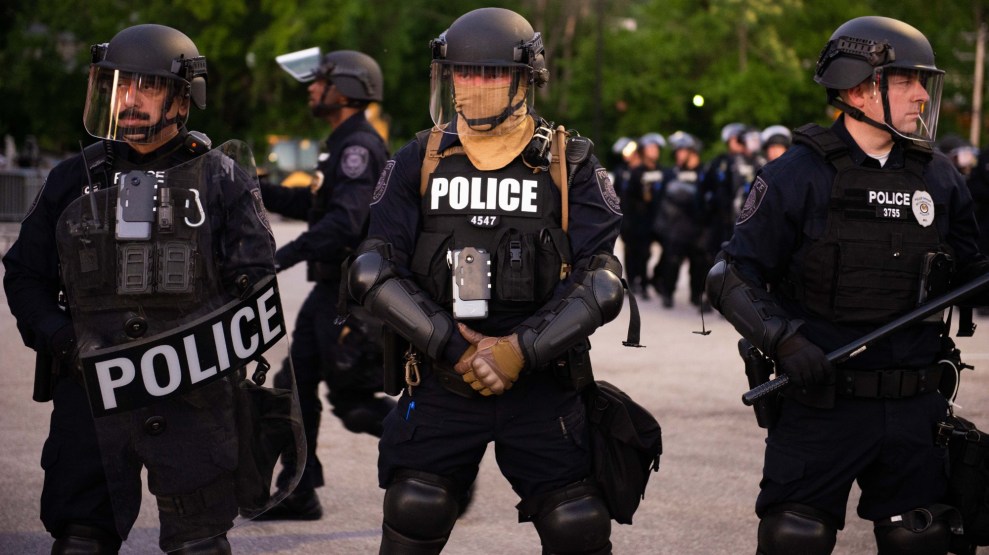 The killing of George Floyd by a Minneapolis police officer, combined with the images of protesters clashing with heavily-armed police around the country, has Congress seriously considering bipartisan legislation to limit the transfer of military weapons to local law enforcement.

On Sunday, Sen. Brian Schatz (D-Hawaii) tweeted that he would be introducing an amendment to the National Defense Authorization Act—an annual, must-pass bill that covers a wide range of Pentagon activities—to “discontinue the program that transfers military weaponry to local police departments.” In September 2017, Schatz sponsored a similar bill, titled the “Stop Militarizing Law Enforcement Act,” alongside Sens. Ron Wyden (D-Ore.) and Rand Paul (R-Ky.), a longtime critic of the militarization of police. On Twitter, Paul’s chief campaign strategist, Doug Stafford, chimed in to support Schatz’s legislation, suggesting Paul would again provide at least some Republican support for the bill.

We’ve been doing this one years. Happy to help.

Schatz’s legislation would target a Defense Department program that distributes military-grade weapons—such as armored vehicles, assault rifles, bayonets, and grenade launchers—to local police departments. Often known as the “1033 program,” the initiative has its roots in the war on drugs and, later, in the government’s counterterrorism efforts after 9/11. The program came under scrutiny in 2014, following the heavy-handed police response to protests in Ferguson, Missouri, over the killing of Michael Brown. In May 2015, President Barack Obama issued an executive order banning the transfer of armored vehicles, certain kinds of ammunition, and other military weapons to local police. President Donald Trump reversed that decision during his first year in office, drawing criticism from Paul and Democrats like Schatz, who unsuccessfully attempted to pass legislation reimposing restrictions.

Now the debate is back in the spotlight as images of police in combat fatigues riding in armored cars spread across social media. On Monday, after federal officers forcefully cleared a peaceful protest outside of the White House with tear gas and flash bang grenades, a low-flying helicopter was spotted above a Washington, DC, neighborhood, bearing a medical insignia. The medical helicopter belonged to the DC National Guard and was evidently being used to scare protesters, sparking a Pentagon investigation into why and how a military asset was used this way. It was just one of numerous examples of military hardware and iconography playing a central role in Trump’s response to growing unrest in the wake of Floyd’s killing. During a weekend conference call with governors, Defense Secretary Mark Esper encouraged them “to dominate the battle space” when it comes to putting down protesters; he was forced to walk back those comments Wednesday morning, telling reporters that he spoke in jargon familiar to the military and didn’t intend for it to be read as a call to proactively attack Americans.

There won’t be a lack of interest in Schatz’s amendment, or the debate surrounding it, but any chance of that legislation getting a vote on the Senate floor will most likely depend on Majority Leader Mitch McConnell (R-Ky.). McConnell is not inclined to support it, says an advocacy group official who is frequently in touch with congressional staff. “He has basically shut down the floor when it comes to the NDAA,” the source said. A more likely scenario is that similar legislation could come to a vote in the House, where Democrats will shape their own version of the NDAA, which must ultimately be reconciled with the Senate bill.

Rep. Adam Smith (D-Wash.), the top Democrat on the House Armed Services Committee, told reporters Tuesday that “we will absolutely be talking about” the militarization of local law enforcement. “It’s been an issue for years and will continue to be,” he said. Smith did not necessarily commit to including an amendment along the lines of Obama’s executive order, but House progressives might force his hand. Rep. Hank Johnson (D-Ga.), a seven-term member of Congress from outside of Atlanta, has repeatedly proposed a bill restoring limits to the 1033 program. When he most recently reintroduced his legislation last year, 72 lawmakers co-sponsored it, including Reps. Tom McClintock (R-Calif.) and Justin Amash (Mich.), a Republican-turned-independent-turned-Libertarian who indicated on Sunday that he, too, plans to unveil legislation related to police reform.

Rep. Ruben Gallego (D-Ariz.), a Marine veteran and member of the Armed Services committee, said Monday he would “push for the House to restrict” the 1033 program, increasing the chances that the issue will receive a healthy debate within the committee before Smith unveils his draft NDAA for the rest of the House.

Even if the House adopts limits on the 1033 program as part of the NDAA, it faces a difficult road in the Senate. Jeff Stein, a Washington Post reporter, tweeted Sunday that “nobody thinks Congress will move anything at all in response to mass protests across major cities.” Some logistical hurdles remain in place, too. The House has no votes scheduled for almost all of June, and Smith has stated that he wants to avoid the type of partisan fight that took place last year, when zero Republicans initially supported the NDAA on the House floor, and Senate Republicans ultimately stripped the final bill of numerous progressive priorities.