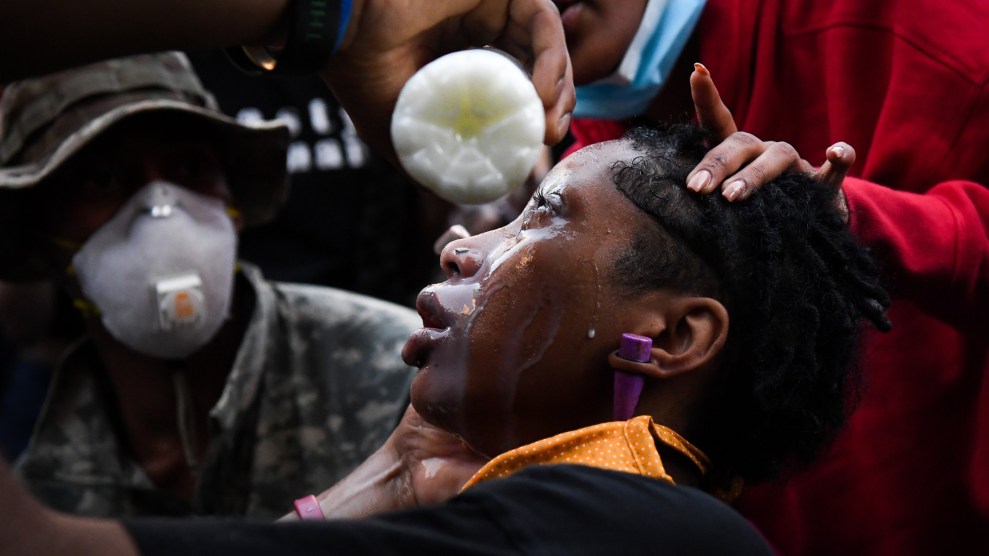 Milk is poured into a demonstrator's eyes to neutralize the effect of pepper spray as demonstrators gather to protest the death of George Floyd near the White House in Washington on Sunday, May 31, 2020. (Caroline Brehman/ZUMA)

The Trump administration has issued threatening emails to journalists across the country demanding retractions and corrections on Washington’s biggest headline last night: that police working for the National Park Service tear-gassed hundreds of peaceful civilians, not for disturbing anything or anyone, but to clear some room for a (very un-) presidential photo op.

Here’s what happened, from my colleague Becca Andrews:

You’ll be happy to hear the Trump campaign has contacted us in a snit. They say the Park Police did not use tear gas—they simply used “smoke canisters and pepper balls.”

Here are the facts: Park Police used tear gas to clear out peaceful protesters so that Donald Trump could fumble a Bible in a lame photo op that disgusted everyone, including the actual clergy of St. John’s—and Pat Robertson. The lying press reported what they saw: that the tear-causing gas was, in fact, tear gas.

The distinction only matters if you’re treating medical damage or covering your ass; the Centers for Disease Control calls every such chemical “tear gas,” including CS, OC, and others. But for police, “pepper balls”—dense projectiles containing OC, which the Park Police insist they used—are very convenient. They can be fired again and again from a gun. They hurt. (In fact, they hurt worse than CS gas.)

In prisons, where tear gas is used to suppress unrest, correctional officers mix-and-match CS and OC freely when they have both on hand—and sometimes hit prisoners with a combo. Read the account of a West Virginia prisoner subjected to both, which I reported in 2016 for The Nation:

“They started out by using MK9, which is a form of pepper spray. They put a fogger attachment on it, to pipe it into the cell. Then they used a mixture of OC and CS. Then they fired beanbag rounds into the locked cell with a shotgun. Then they upped it to Sting-Ball grenades. They threw two grenades into the cell—a cell that’s approximately 80 square feet. They did all of this back to back to back, without stopping.”

That kind of treatment often causes permanent damage, or worse, as in the case of 37 Egyptian prisoners killed by police who fired US-bought CS gas into a locked police truck. As in the cases of the women in Bahrain and elsewhere who have miscarried after getting splashed with CS for the crime of protest. The Geneva Convention identifies all forms of tear gas as chemical weapons, and bars their use in times of war.

And victims often can’t tell one from the other, like the women pepper-sprayed by ICE while in immigration detention for asking questions about coronavirus. From my colleague Noah Lanard:

[My client] then informed me that the officers grew impatient and angry with the women and released tear gas into the room where they were giving the presentation. The officers promptly left the room and locked the doors.

[She] told me that her and the rest of the women were left locked inside the room with tear gas for approximately one hour. She stated that the women were screaming to be let out of the room, but no one came to their aid.

It turned out to be pepper spray. The women were never able to tell. It was ICE spokesperson Bryan Cox who took pains to draw that distinction.

All these names are calculated and political, which is what makes the debate so silly. “Rubber bullets” are rubber-coated steel. They kill. “Riot-control agents” are being used to control peaceful gatherings for human rights, but the name “citizen-control agents” doesn’t sell. “Less-lethal weapons” are plenty lethal. “Pepper balls” sound like something you eat.

No manufactured scandals, no fascism.