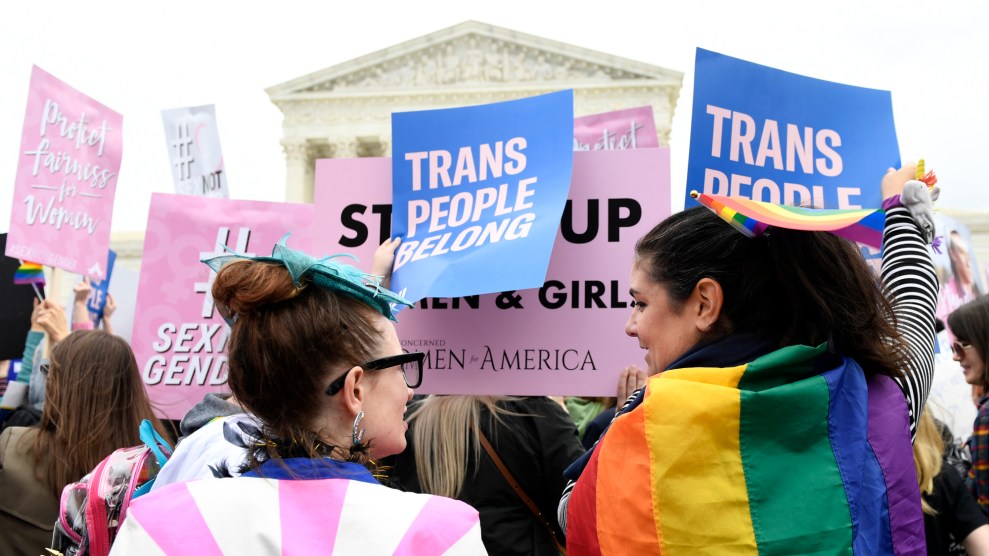 In a monumental victory in the fight for LBGTQ equality, the Supreme Court ruled Monday that Title VII of the 1964 Civil Rights Act—which bars employment discrimination on the basis of sex—protects gay and transgender Americans. The lopsided 6–3 decision was written by Justice Neil Gorsuch, who was President Trump’s first appointee to the court. Gorsuch was joined by Chief Justice John Roberts, who was appointed by President George W. Bush, and by the court’s four liberal justices.

“Judges are not free to overlook plain statutory commands on the strength of nothing more than suppositions about intentions or guesswork about expectations,” wrote Gorsuch. “In Title VII, Congress adopted broad language making it illegal for an employer to rely on an employee’s sex when deciding to fire that employee. We do not hesitate to recognize today a necessary consequence of that legislative choice: An employer who fires an individual merely for being gay or transgender defies the law.”

Experts say the ruling could have ramifications beyond employment—with this new Supreme Court precedent, it will be difficult to justify federal, state, and local nondiscrimination policies that include sex but exclude gender identity and sexual orientation. Just last week, the Trump administration finalized a rule removing federal nondiscrimination protections for LGBTQ people in health care and insurance.

“Today, the Supreme Court confirmed that our nation’s federal laws include lesbian, gay, bisexual and transgender people and that we have a right to be ourselves at work, and in doing so, our nation’s highest court, for the very first time, has also affirmed our humanity and dignity,” said Diana Flynn, Litigation Director for Lambda Legal, in a statement. “In our hearts, we understand that we deserve to exist and be treated equally, the law was clearly on our side and the Court agreed. This is an incredible step forward in the civil rights of transgender people and the ripple effect of this decision will be far-reaching.”

Prior to Monday’s ruling, nondiscrimination polices for the LGBTQ community were scattershot across the country. As I wrote last fall when the case was being argued: