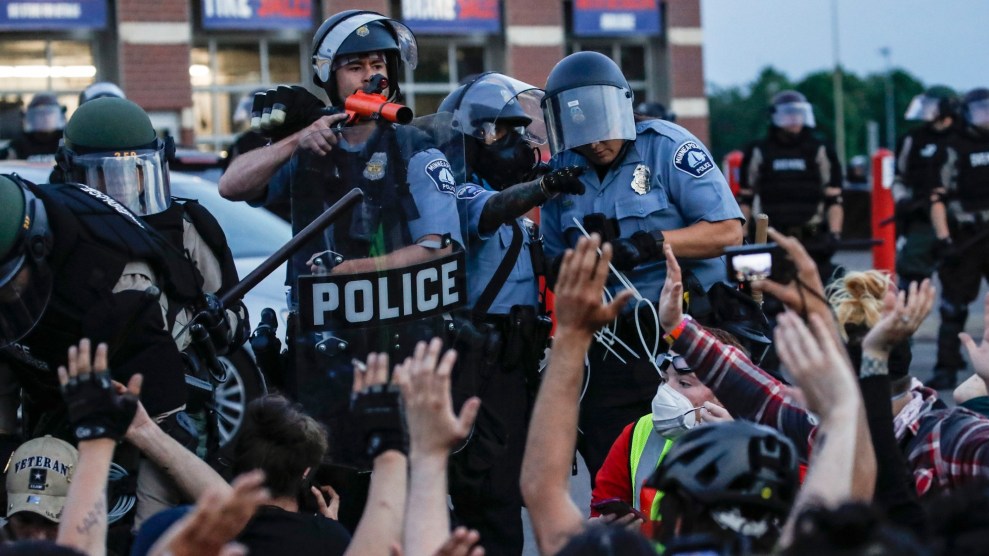 Police officers confront protestors in Minneapolis on May 31.John Minchillo/AP

As soon as protests began in Minneapolis on May 26—the day after George Floyd was killed by a white police officer—Jared Mollenkof got to work. The 34-year-old public defender, who volunteers as a board member for the Minneapolis Freedom Fund, knew that many people would be arrested as police began to clash with protesters. And he knew that the demonstrations would only grow larger. And so Mollenkof and his fellow Freedom Fund volunteers got to work spreading the word about their organization, a community nonprofit that posts bail for low-income residents in the Twin Cities who cannot afford it. Their aim, he says, was to identify protesters who had been arrested and get them out from behind bars.

As news of Floyd’s death and the subsequent demonstrations in Minneapolis began to spread throughout the world, so did the work of the Freedom Fund. According to Mollenkof, the group has raised an astounding $20 million in the past week. Celebrities like Chrissy Teigan, Janelle Monáe, Seth Rogen, Harry Styles, Steve Carrell, and countless others have boosted the fund, donating hundreds of thousands of dollars to help bail out protesters. Campaign staffers working for Joe Biden donated to the fund, drawing ire from President Donald Trump, who tweeted that the presumptive Democratic nominee’s team is “working to get the Anarchists out of jail.”

“These were the people that trashed Seattle years ago. Who’s paying for these people. I was appalled that 13 of Joe Biden’s staff were donating money to bail people out in Minneapolis. They should have stayed in jail until this is over (and beyond).” @newtgingrich @foxandfriends

Mollenkof tells Mother Jones that the Freedom Fund has received so many donations “from all over the world” that it’s now telling people it no longer needs any more money and is encouraging them to donate to bail funds in other cities and to other local and national activist groups, such as the Black Visions Collective, Reclaim the Block, and the Twin Cities Coalition for Justice 4 Jamar. “We have been working around the clock to try to make sure that we honor the incredible amount of trust that people have placed with us,” Mollenkof says. “And to honor the sacrifices that people are making in order to ensure that no one that is expressing righteous anger right now stays inside of a jail because they don’t have the resources to buy their freedom.”

For the Minneapolis Freedom Fund, which formed in 2016, this moment presents a unique opportunity to raise awareness of the predatory nature of cash bail systems. In cities and municipalities that still use cash bail—the practice of charging a fee for a person accused of a crime to be released as they await trial—funds have been established to collect donations to help free those who cannot afford their own bail. Cash bail is often costly, and the system disproportionately harms communities of color and people experiencing poverty, forcing them to remain locked up for weeks or months before they are even convicted of a crime. The mission of bail funds like the Freedom Fund, Mollenkof says, isn’t to reform the cash bail system but to end the system altogether, in part by posting people’s bail in order to edge out predatory bail bond agencies that profit from loaning people bail money. “We want bonding companies across the country to be starved,” Mollenkof says. “We want them to go out of business so that this system, as it now works, cannot operate this way.”

It’s been a little over a week since Floyd was killed, and there’s little indication that the widespread, sometimes violent demonstrations across the country will let up anytime soon. Many demonstrations have descended into chaos due in part to the militarized police forces that have been called in to disrupt the gatherings—often attacking protesters with tear gas, rubber bullets, and other violent tactics. Thousands of protesters have been arrested across the country, a situation that has directed a lot of attention to the work of bail funds. Mollenkof says that, thanks to the surge of donations, the Freedom Fund now has enough financial support to hire two of its volunteer board members as full-time staffers. He adds that the group has been coordinating with other bail funds around the country to offer support and redirect resources where needed.