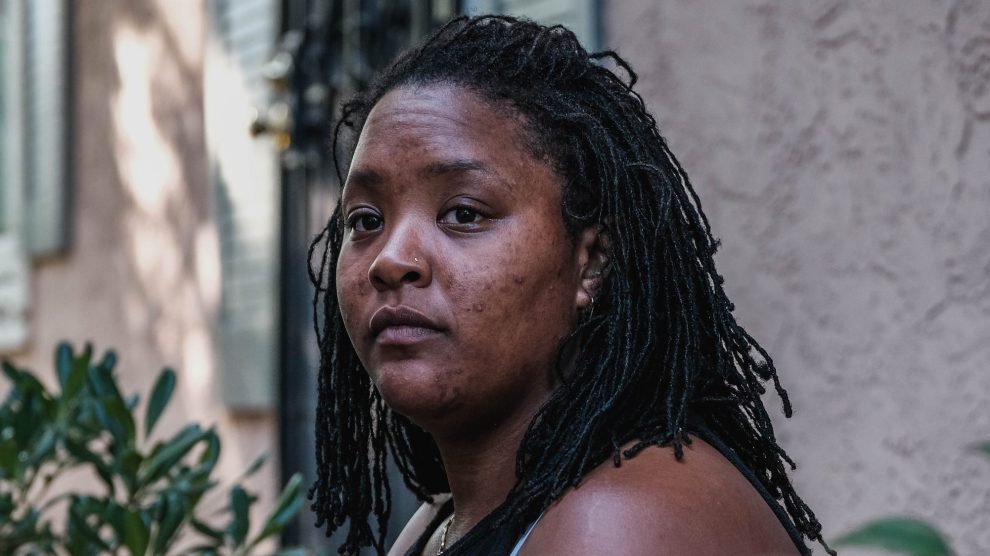 Crishala Reed wrote on a jury questionnaire that she supports Black Lives Matter. She was soon removed from the jury poolBrandon Ruffin/The Marshall Project

Questioning a potential juror named Crishala Reed, the prosecutor homed in on a sentence from Reed’s questionnaire.

“I support Black Lives Matter,” she had written.

The prosecutor asked Reed if she supported “destroying other people’s property.” Reed said no. After the questioning, the prosecutor used a peremptory strike, where no reason is required, to remove Reed from the jury for the 2016 trial.

She looked around the jury box and didn’t see any other Black people, Reed told The Marshall Project.

“I felt targeted,” Reed said. “It was a life-changing experience for me, personally. And I still talk about it to this day. I tell my kids about it. Not to scare them but to make them aware.”

The questioning of Reed’s support for Black Lives Matter will be considered by a California appeals court in the coming months. Lawyers for the defendants in the double-murder trial say the decision to remove Reed violated the US Constitution’s ban on excluding prospective jurors based on race.

The case is one of several across the country in which prosecutors have pressed potential jurors about their sympathy for Black Lives Matter—a movement that has won growing mainstream support in the weeks since the killing of George Floyd.

A Minneapolis man’s conviction was upheld in 2016 after a court found there were no racial overtones to the question, “Have you participated in any of the Black Lives Matter kind of marches and stuff like that here?”

But the Nevada Supreme Court in 2018 criticized prosecutors for the racist implications of questioning potential jurors about Black Lives Matter and ordered a new trial.

This year, a North Carolina court upheld a conviction where a potential juror, a college student who was involved in Black Lives Matter, was dismissed by the prosecutor, who said her activism raised questions about whether she could be impartial toward law enforcement.

Legal experts say that those cases probably represent only a fraction of instances where jurors have been asked their views on Black Lives Matter, because these are the cases that have made their way up to appeals courts.

The rules limiting discrimination against jurors are called the Batson process, named after a 1986 US Supreme Court case over a trial at which prosecutors dismissed all prospective Black jurors. The high-profile case of Curtis Flowers, tried six times for the same crime, brought the issue to national attention again last summer when the US Supreme Court overturned his conviction, finding that a White prosecutor had intentionally removed Black jurors.

If a California appeals court finds that the prosecutor used race in her decision to remove Reed, the defendants could get a new trial. A spokesman for the district attorney in Contra Costa County, northeast of San Francisco, said prosecutors would not comment while the appeal is pending.

The case involves the 2012 murder of a Bay Area couple. Prosecutors accused three men—Sheldon Silas, Reginald Whitley and Lamar Michaels—in the fatal shootings of Christopher Zinn and Brieanna Dow. All of the accused are Black. At trial, prosecutors argued the shootings happened during an argument after the men accused Zinn of stealing guns from a San Francisco gang. All three were convicted and received life sentences.

The California Attorney General’s Office, which handles criminal appeals for county prosecutors, said race was not a factor in Reed’s dismissal. In a court filing, it said Reed crossed her arms when the prosecutor talked to her, but not when the defense did, and she was “openly hostile when the prosecutor questioned her about BLM.”

The Black Lives Matter issue in the case is catching the attention of national litigators who specialize in jury discrimination, including Jim Craig, the director of the Louisiana office of the Roderick and Solange MacArthur Justice Center. Craig had filed a brief in support of Flowers during his appeal.

“That these same techniques of racial discrimination and trying to whitewash discrimination are not just a part of Southern trials, but are a part of some of the most progressive parts of the United States, is exceptionally troubling,” he said.

When Reed, a 28-year-old mail carrier who lives in a suburb about 30 miles northeast of San Francisco, received a jury summons, she was eager to go, she said. In the days before she went to court, she mentioned jury duty to her stepfather, who told her not to get her hopes up.

Reed showed up for jury duty and filled out a form with questions about her work history and experience with the criminal justice system.

One question asked if she had strong feelings about how the criminal justice system treats people based on gender, race, religion or national origin. She checked yes, but wrote that it wouldn’t affect her role as a juror.

Another question asked whether she was part of “any law or justice-focused special interest groups.” The form listed examples, including the National Rifle Association, the American Civil Liberties Union, Blue Lives Matter and Black Lives Matter. Reed wrote she supported Black Lives Matter. Lawyers often test jurors for views about the criminal justice system, and courts have given them wide latitude, even allowing prosecutors to probe jurors on their opinions of the O.J. Simpson verdict.

In the California murder case, Reed was the first juror the judge called on in the group. The judge asked about her views on fairness in the criminal justice system.

“I support it,” Reed told the prosecutor, according to a transcript filed in court. “But I’m not in anything social like, as in, group-wise.”

Reed said she didn’t support any illegal behavior, but that she supported the cause.

Smith then asked about whether she supported “riots” during demonstrations. After the defense lawyer objected, Smith asked if Reed supported demonstrators who “destroy property.” Reed said no.