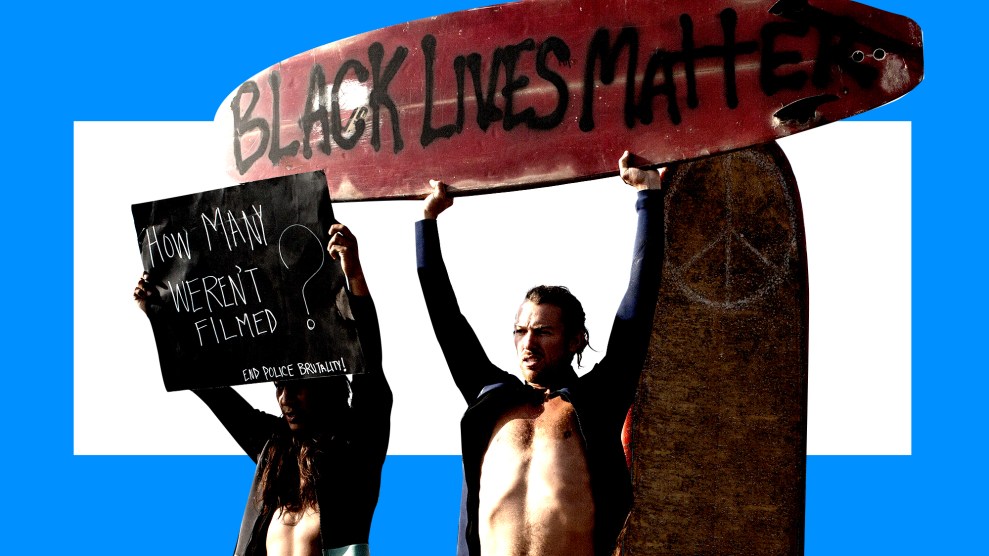 Update, August 10: Deputy Public Defender Jacquie Esser did not secure enough votes in the primary to proceed to the November election. In a crowded field of seven candidates, she came in third with 17 percent of the vote. The top two vote-getters, Steve Alm (35 percent) and Megan Kau (21 percent), will face off in November.

Thousands of miles away from Minneapolis, hundreds of surfers paddled into the ocean surrounding the Hawaiian Islands on June 5 and sat silently on the waves to honor George Floyd, who had died under the knee of a Minneapolis police officer days earlier. The next day in Honolulu, more than 10,000 people marched in protest of the killing. Among them was Deputy Public Defender Jacquie Esser, a white woman running to become Honolulu’s next top prosecutor, a position that normally works closely with police. She gripped a Black Lives Matter sign in her hands.

Only about 4 percent of Hawaii’s population is Black, but the island state knows all too well about racism in the criminal justice system: Compared with white people, Native Hawaiians are vastly overrepresented in the state’s prisons and jails—a reality that stems in part from the marginalization of colonization and continuing discrimination. In 2018, Native Hawaiians made up 18 percent of adults in the state, but 37 percent of people incarcerated under Hawaii’s jurisdiction, according to data from the Department of Public Safety and the Office of Hawaiian Affairs. Black people and Pacific Islanders are also disproportionately imprisoned in the state.

As Honolulu prepares for its primary election on Saturday, Esser has emerged as one of the most progressive candidates for city and county prosecutor, largely because of her proposals to make the legal system more fair for Native Hawaiians and other people of color. She’s one of seven attorneys vying to replace the county’s incumbent top prosecutor, Keith Kaneshiro, who’s been on leave for months dealing with a corruption scandal. Some of these candidates, including attorneys Megan Kau and RJ Brown, have denied that systemic racism is even a problem in their profession locally, according to a recent candidates’ survey conducted by the ACLU of Hawaii. (You can read these candidates’ replies to the survey question for more context.) Other candidates acknowledge racism but have offered less comprehensive proposals to reform, or have declined to support policies that Esser backs, like an end to drug possession prosecutions, that would reduce disparities.

Candidate Dwight Nadamoto, who has been Honolulu’s acting prosecutor since the incumbent went on leave, suggests that his office is already doing everything right when it comes to racial equity in the system. “It would be wrong to suggest my administration contributes in any way to disproportionate representation in our prisons by any one group,” he told Honolulu Civil Beat, a local news organization. “Race plays no role whatsoever in our decisions to charge cases.” He’s touted a tough-on-crime mentality, saying he doesn’t favor “releasing dangerous criminals” from overcrowded prisons, and that he wants to build bigger prisons to hold them.

“Public safety is more than just locking people up.”

Esser couldn’t disagree more. For more than a decade, she’s worked as a public defender, representing low-income people accused of crimes. It’s a job pedigree that was once unusual for prosecutor candidates, but that has become more common after former public defender Larry Krasner was elected district attorney in Philadelphia in 2017. “Public safety is more than just locking people up,” Esser told me this week. “The role of the prosecutor is to divert people out of the system who shouldn’t be in the system, divert people to services who truly need services, and not criminalize public health issues” like addiction and homelessness. She’s endorsed by Krasner and San Francisco District Attorney Chesa Boudin, another former public defender, along with Sen. Bernie Sanders and Rep. Ayanna Pressley.

Esser is proposing several changes to reduce racial disparities, including some that have been tried in other states. She opposes requesting cash bail because it punishes people who are too poor to get out of jail, disproportionately people of color. She has pledged not to prosecute people for drug possession, whether marijuana or meth, and notes that these crimes have unevenly led to the incarceration of Native Hawaiians. (The acting prosecutor says he wants to ramp up meth prosecutions.) She would also decline to bring people to court for sex work, or for behaviors stemming from poverty or mental health issues. She wants prosecutors to practice blind charging, by preventing them from seeing information that would allow them to determine a person’s race. And she wants to incorporate local Hawaiian healing practices, including some that are similar to restorative justice, into the process of responding to crime. The Appeal reported that she’s the only candidate in the primary race who expressed unqualified support for the state Supreme Court’s plan to release people from prisons at the start of the pandemic.

Esser has vowed not to accept donations from police unions.

On police accountability, Esser is also proposing a major overhaul. She has vowed not to accept donations from police unions—a reform that only a small number of elected prosecutors have embraced in the United States. Like several other candidates in the race, she wants an independent unit to investigate police violence, another way to avoid a conflict of interest. And she has vowed not to rely on the testimony of officers who are found to be dishonest, another reform that progressive prosecutors in other states have adopted. Honolulu’s prosecutor office has not historically maintained a list of these officers to track them.

The Honolulu police have killed at least 29 people over the past decade, according to an investigation by Civil Beat, but the police department regularly undercounts the number of fatalities and hides information about shootings from the public. People of color are overrepresented among the victims: Though Black people make up about 4 percent of the state population, they accounted for 7 percent of Honolulu’s use-of-force incidents each year over that period, Civil Beat reports. Native Hawaiians and other Pacific Islanders accounted for a third of use-of-force incidents in 2018.

Esser was inspired to run for prosecutor after seeing other reformists like Krasner, Boudin, Rachael Rollins in Boston and Tiffany Cabán in New York City gain momentum with platforms to end mass incarceration. Many of her proposals for Honolulu mirror or build on stances these attorneys have proposed in their own counties—often leading to lower incarceration rates, especially for minor offenses, without a corresponding uptick in overall crime. These reformist attorneys have also had to contend with fierce pushback from police unions and Republicans; Krasner, among others, has been accused of allowing a rise in shootings in his city. (Shootings are also rising in other cities without reformist prosecutors.)

The crowded Honolulu primary race will likely be close—a poll conducted in late July showed that former judge and prosecutor Steve Alm had support from 24 percent of respondents, and Kau and Esser each had 17 percent; nearly a third of poll takers were still undecided, according to Civil Beat. Like Esser, Alm is positioning himself as a reformer, and he supports an end to cash bail, but he has not pledged to stop prosecuting sex work or drug crimes, or to establishing an independent unit for investigating police violence. Esser has also been gaining fundraising steam. Though Alm has raised the most overall money in the race, Esser brought in $27,000 in July—more than the other candidates combined that month, and much of that came from small donations. If no one reaches half the vote in Saturday’s primary, the top two candidates will go to a runoff in November’s general election.

The stakes, Esser acknowledges, are big. “I’m running for prosecutor to end mass incarceration,” she put it bluntly in a recent forum. “Mass incarceration has caused generational trauma and harm to our most poor, our Native Hawaiians, and community of color. We absolutely can create a more fair and just system.”