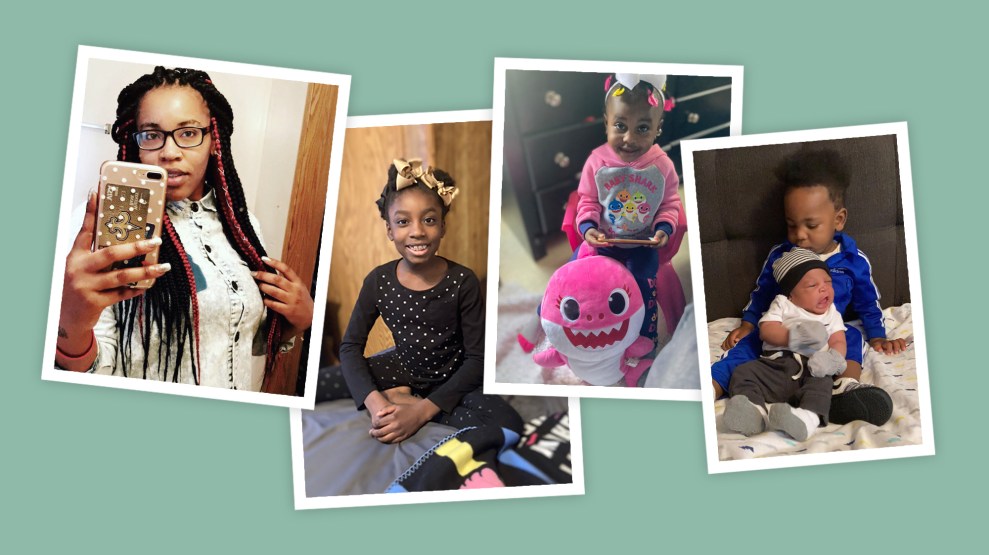 For the 45 percent of people in the United States who have ever had an immediate family member incarcerated, lack of contact with a loved one is nothing new: Restrictions on visitation, exorbitantly priced prison phone calls, and even bans on physical mail are just a part of day-to-day life. But when disaster strikes, the inability to communicate across prison walls, even to confirm a loved one is safe, can turn that normal frustration into terror.

This week, I spoke with Sadadra Davis, whose husband is incarcerated in the Nelson Coleman Correctional Center, a jail that holds up to 600 people in St. Charles Parish, about a half-hour west of New Orleans. More than 100 miles away in Lafayette, Louisiana, where Davis lives with their five children, Hurricane Ida just meant “a little wind, nothing major at all,” she says. But in St. Charles Parish, winds of about 100 mph downed trees, ripped houses, and left power lines in the street, making roads impassible. The lights are expected to be out for a month, and drinking water is compromised.

Yet despite a mandatory evacuation order for parish residents, Sheriff Greg Champagne did not evacuate people in the jail ahead of the storm. By Monday, the 911 system in the parish wasn’t working, according to Nola.com; on Thursday, repeated calls to the sheriff’s office and jail still failed to connect. For Davis, who has not received any word of her husband’s safety since the storm, the silence is frightening. She is planning to travel to the jail herself, along with her husband’s mother, to get answers.

What follows is an edited and condensed transcript of Davis’ comments:

I last heard from my husband Sunday at 4:45 p.m. While on the phone, there was a bunch of noise from the other inmates, but he was like, “Babe, just be quiet and listen. You hear the noise?” It sounded like the wind was taking the roof, like it was flapping up and down. I said, “You know that on the news that they say it’s mandatory evacuation for St. Charles?” He was like, “Man, people are not worried about us. They’re not trying to evacuate us.”

“These people are not animals, so don’t treat them like that. They’re humans in there for their wrongdoing.”

After that call, I haven’t talked to him. He has seizures, so I’m worried. My concern is him not being able to get those meds, and properly have water. At this moment, they’re saying that even if you can get water in St. Charles, you have to boil it. Then they’re saying people might not have lights for a month. You’re going to have these inmates just sitting in there for a month before Entergy can come and fix the lights, or for them to take baths?

These people are not animals, so don’t treat them like that. They’re humans in there for their wrongdoing.

I’ve been reaching out to the sheriff, the warden, the jail system. If you call the jail, it’s going to go doot-doot-doot and hang up. No communication at all. So now it’s just a waiting and guessing game till I’m able to get there, because I’m not getting the answers that I need.

Normally, my husband would call nonstop. I’ll put $100 on the phone to try to last for a week, and my husband will burn it up in one day. He’ll ask, “What’re you doing?” or say, “Oh my god, I can’t get y’all out of my head.” He just wants to clown around with his kids, because he’s been in there for the birth of our one-year-old son and this new baby. So he wants to be able to hear them play around. We’ll sit around and listen to the baby, try to talk to him.

His kids hear me trying to figure out what’s going on with their dad. They’re concerned. My 4-year-old son was crying. He’s in school, but today he didn’t go because he was too frustrated. He said he wants his dad to come home, or he wants him to be okay. I told him, “Just ask God.” We always tell him to go to God about anything. I was like, “Dad’s gonna be okay. Right now, maybe it’s just the power. But hopefully someone’s gonna reach out.” We don’t want to think negative. We always want to think positive about everything.

I want to know, is my husband okay? Is everyone okay? All the inmates. If they don’t have power and water, are you going to move them to where they can have power and water and for them to contact family? I’m not sleeping, I’m not going to work, because I’m concerned. To not be able to hear his voice is hurting me.