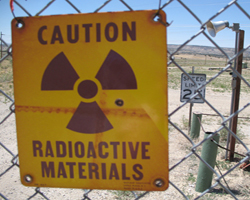 Lighting a cigarette in the middle of a New Mexico windstorm is the kind of thing an aging uranium miner like Milton Head does with precision, finesse—and frequency.

He keeps smoking as we drive down Highway 605, toward the mines where he spent 40 of his 69 years working. Though the highway is empty now, Head remembers ambulances screaming past him toward town on his daily drive. “I lost a lot of friends [in the mines],” he says. “But you know, we all knew what was involved, every time we went to work.”

We pass the Uranium Café, a relic of the 1950s uranium boom. Faded blue-and-white gingham curtains still line the windows, though the place has been closed for years. When the near meltdown at Three Mile Island in 1979 made nuclear power a political third rail, the population of this town, Grants, dwindled from 30,000 to 9,000. Today, prisons are the largest employers in the area.

The return of uranium mining to this small, recession-struck town would bring with it thousands of well-paying jobs. Two years ago, a uranium enrichment facility in nearby Hobbs was green-lighted, to the delight of county manager and Democratic member of the New Mexico Senate David Ulibarri. “Uranium mining is a proven industry here,” he said then. “With the modern technology available it can be done safely, to avoid many of the problems we saw before.”

Now, new uranium mining claims have sprouted up throughout northwestern New Mexico. And although anti-nuke Tom Udall won the New Mexico Senate seat in November, the notion of a “nuclear renaissance” still percolates in Grants.

AN ABANDONED MINE is not as grandiose or mysterious as one might imagine. There aren’t tunnels to explore; there’s no strange smoke. Closing a mine is not unlike stomping out an anthill—you just put dirt on top of it. The dirt mounds left behind are called tailings piles, and they’re all over the outskirts of Grants. Some are the size of a football field, others, the size of a Volkswagen. Mining companies put thousands of rocks on top of the piles to keep the dirt from blowing off and exposing the radioactive materials below. The two largest tailings piles, formerly the Homestake Mill, were declared a public health hazard last year. This declaration was in no small part because of Head, who for 20 years has been trying to prove that the groundwater in Grants is contaminated. “This used to be the carrot capital of the country,” he says, as we pass an empty patch of dirt. He claims that the numerous chemicals used in uranium mining, namely chlorine, have seeped into the soil and turned it to clay. “People try to grow things, but the soil just isn’t the same,” Head says. “I don’t think it ever will be.”

Other Grants residents are more conflicted about uranium. “The harmful effects from the last mining boom have touched a lot of us here individually, be it health problems or water issues,” says Joy Burns, a schoolteacher whose family has lived in Grants for seven generations. “But if you want to turn your lights on, maybe this is the price you have to pay.”

Near Grants, the Navajo Nation—which banned uranium mining on reservation land in 2005—has also entered into debate with members of the Grants community. The Navajo tribes and other surrounding pueblos are engaged in a fight over land use that has brought to the surface racial tension many thought was long buried in Grants.

The sacred base of Mount Taylor, an extinct volcano known as “Tsoodil” in Navajo, is home to several abandoned uranium mines. Now, several companies are hoping to get permits for exploratory drilling there for uranium ore. Last year, the Zuni, Acoma, Navajo Nation, and Laguna tribes applied for an emergency Traditional Cultural Property designation for the 660 square miles around the summit. For a temporary and relatively ambiguous designation, the effects of the TCP were neither. “It has completely divided the town,” says Ulibarri.

The designation creates an additional speed bump in the already decadelong permitting process between mining companies and the Nuclear Regulatory Commission. “It really just adds another piece of red tape to keep uranium mining from starting up,” says Marita Noon, executive director of the pro-nuclear Citizens’ Alliance for Responsible Energy.

A community hearing was held in Grants shortly after the November elections in order to discuss the future of the TCP designation. The TCP will either expire or be made permanent in June 2009, depending on what evidence the Native American communities can present to the state to prove the cultural significance of Mount Taylor.

The hearing quickly disintegrated into a shouting match between the pro-mining residents and several small anti-uranium-mining coalitions in the area. Chris Shuey of the Southwest Research and Information Center, one of the more outspoken critics of uranium mining in New Mexico, says that while anti-mining groups in Grants have grown more organized over the last several months, they continue to fight a losing battle against the industry’s money and influence in the town. “This last meeting was like a revival-type atmosphere for the uranium industry,” Shuey says. “There were evangelical types of babble and demonizing of the Native American community, or anyone else who dared to speak out against uranium mining.”

Sonny Weahkee, executive director of the SAGE Council, a Native American advocacy group in New Mexico, says the crumbling economy remains the biggest threat to all efforts to prevent uranium mining from resurfacing in Grants. “Our state is in a budget crisis,” Weahkee says. “And the uranium industry is positioning itself to the legislators as the best way to bring much-needed jobs to our state.”

ACROSS THE STREET from the boarded up Uranium Café stands the town’s 21-gun salute to the mining industry, the New Mexico Mining Museum. When I walk into the redbrick building, which also doubles as the town’s Chamber of Commerce, a petite blonde behind the counter is visibly annoyed as I interrupt her giggling phone conversation to pay the $3 for the “underground” tour.

A few bucks buys visitors an elevator ride down to the building’s basement, which has been converted into a replica of a uranium mine. While I am not normally claustrophobic, the low ceilings and musty smell of boarded-up wood and steel make my head spin for a few moments after stepping out of the elevator.

The exhibit, along the winding narrow dirt pathway, is filled with donated items once used in the mines, from muddied boots and worn-out gloves to drills the size of compact cars. Before the faux-mine’s break-room area, a large wooden board labeled “Blasting Board” in faded paint hangs on the wall. Nailed into the board are hooks strung with dozens of metal name tags separated into two categories, “In” and “Out.” Beside this archaic tracking system, a sign reminds the miners not to forget to switch the tag from one side of the board to the other before heading down into the caves below, so nobody was left behind.

Upstairs, rows of black-and-white photographs are displayed. There are dozens of pictures of miners lined up in a row, gloved hands on each other’s shoulders, dirt smeared across their faces. Next to one of the exhibits, a large, capsule-shaped, thick glass container is filled with bright yellow powder. It seems to be enriched yellowcake—the end product of mined and milled uranium ore.

A small little boy runs past me up to the glass, which stands just at his eye level. He takes his finger and begins to tap, gently, then with increasing force on the glass. His mother quickly walks up behind him, grabs his hand and puts it down at his side. This gentle disciplinary warning does very little, and less than a minute later the boy is back, pounding harder than ever on the glass, as if his tiny fist could break through the multilayered capsule.

His mother pushes past me, giving me and the few other museumgoers an apologetic glance before scooping the boy up into her arms. “Jimmy, you can’t play with that,” she coos. “I’m sorry sweetie, but that stuff is dangerous.”