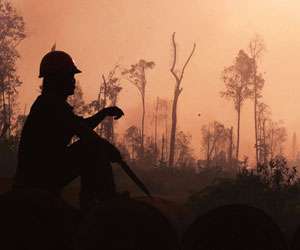 UPDATE: Join us for an expert-led reader forum April 13-17 on MotherJones.com around the question: Is organic and local so 2008?

Click here to return to Why Biofuels Are the Rainforest’s Worst Enemy.

Henry Ford envisioned ethanol as the “fuel of the future”; his Model T ran on ethanol and petroleum.

The International Energy Agency forecasts that conventional oil production will peak by 2020, with massive price increases preceding the peak.

Archer Daniels Midland controls 10% of the US ethanol market.

Former adm ceo Dwayne Andreas, whose donations to Nixon were linked to the Watergate break-in, is one of the nation’s top political contributors. Since 2000, adm, its pacs, and its employees have given $1.4 million to Democrats and $2.1 million to Republicans.

Food prices have risen 130% since 2002. The World Bank estimates that up to 75% of the increase is due to demand for biofuels.

There were food riots in at least 30 countries in the past 2 years. More than 40 people were killed when Cameroonians protested rising prices.

Clearing grasslands to plant biofuel crops releases 93 times as much greenhouse gas as will be saved by the fuels grown on the land each year. Destroying Indonesian peat bogs releases 420 times as much.

Obama’s staff has consulted the Renewable Fuels Association, an adm-led trade group, on how to craft an ethanol bailout.