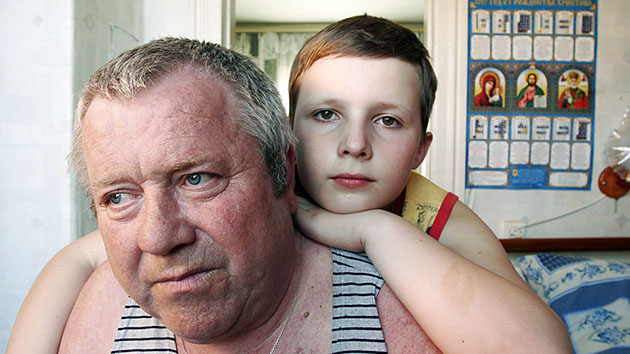 Photojournalists often distort the aftermath of the 1986 Chernobyl nuclear power plant explosion. They parachute in, expecting danger and despair, then leave after a few brief days with photos of deformed children and abandoned buildings. This sensationalist approach obscures the more complex stories about how a displaced community adapts and survives. There is suffering, yes. But there’s also joy and beauty. Endurance and hope.

Overall, some 350,000 people were displaced by the nuclear accident, and six million continue to live in contaminated areas. For many of the evacuees I interviewed about Chernobyl, losing their homes was as traumatic as the accident itself. In the two years I spent living in the villages I photographed I heard compelling stories about alcoholism, mental illness, unemployment, and crime. Vova likes to go mushroom hunting with his in-laws, despite government warnings against it. Viktor survived cancer treatment only to watch his wife Lydia develop cancer as well. Vasily would die before he would live anywhere else.

I am both an artist and an environmentalist, and I find that the two cross-pollinate in my photography. In this project I examine the human impacts of environmental change. Why do some overcome difficulties while others surrender to them? What does it mean when your home is irreparably changed? 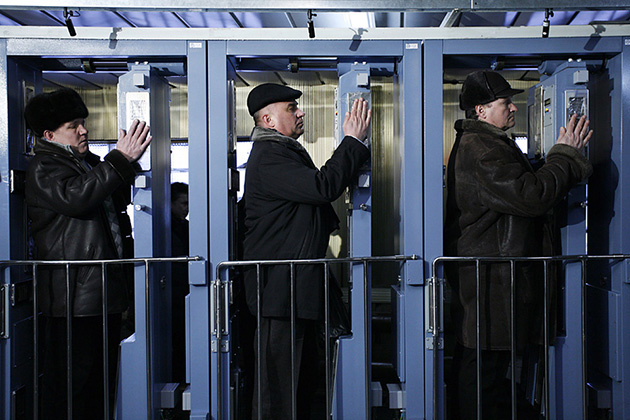 On the night of April 26, 1986, a reactor exploded during a late-night safety test at the Chernobyl Nuclear Power Plant in what is now Ukraine. Radiation from the accident covered nearby towns and sent radioactive particles around the world. Pripyat, a nearby village, was permanently evacuated, along with every human within 30 kilometers of the Chernobyl plant.

Although the plant stopped generating electricity in 2000, 3,800 employees continue to work at the plant in 2010. They commute from the new city of Slavutych (population 24,300), which was built after the accident to replace Pripyat. Workers must pass through a radiation checkpoint each day before they board the train home. 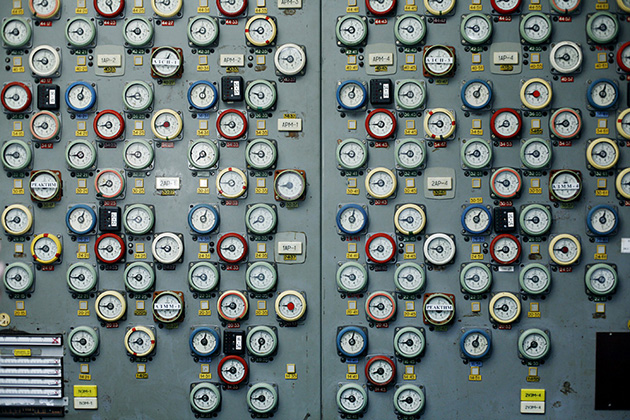 This wall of dials in the Chernobyl First Block control room once marked the depth of each fuel rod in the reactor core. Just down the hall is the burned-out Fourth Block control room, where a combination of design flaws and human error triggered the world’s worst nuclear accident. Most estimates say 95 percent of the radioactive materials remained on plant grounds or spread to the adjacent forest. Both were decontaminated, using 850,000 liquidators from across the Soviet Union. 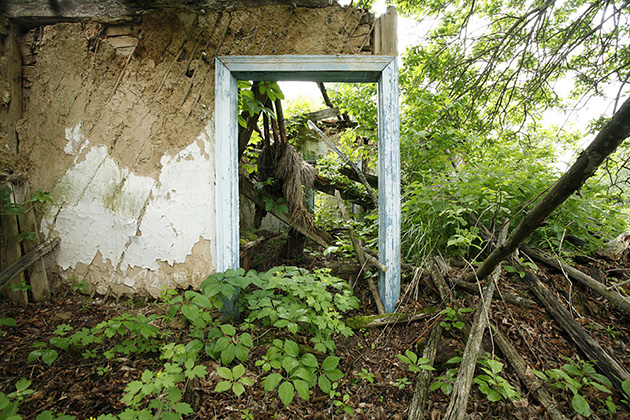 In the Chernobyl Exclusion Zone, the abandoned village of Korogod is slowly crumbling into forest. Village buildings like this one typically remain sturdy until a roof starts to leak, then quickly fall apart. Everything of value has been stripped from the structures already. Today this is considered a relatively “clean” area of the zone; on this day, the radiation levels here averaged just 0.06 mSv/hr (milliSieverts per hour) outside. 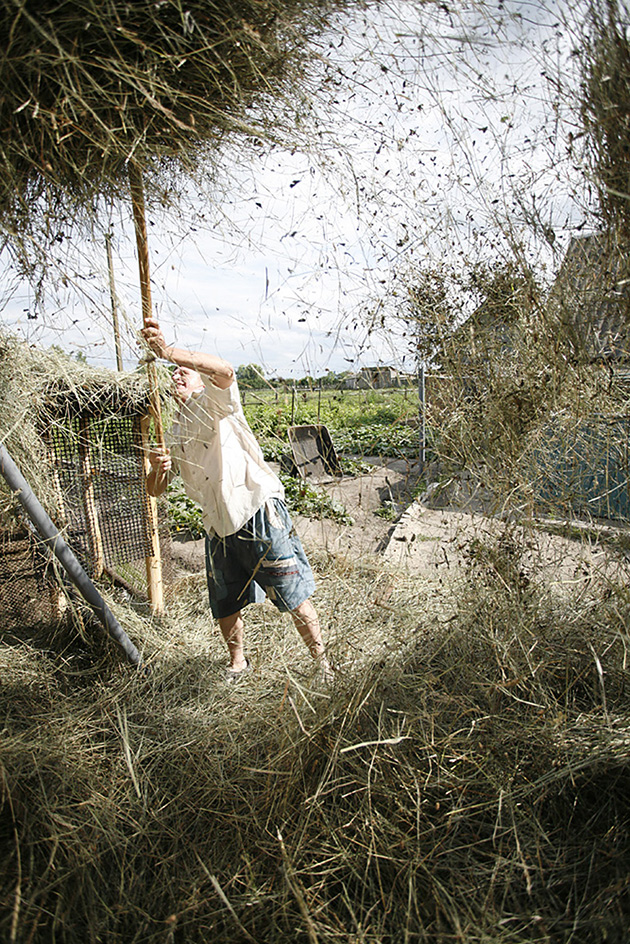 Petro Konovalenko is head of the village council in Sukachi, Ukraine. This afternoon, he shed his suit to help neighbors load hay into their barn. Half the people of Sukachi are Chernobyl evacuees, relocated here from the village of Ladizhichi. In the weeks after the Chernobyl accident, 91,000 Ukrainians were permanently evacuated from the exclusion zone. However, over 2,000 refused to leave or illegally returned as soon as they could. Nearly 400 remain today, among them the final six remaining inhabitants of the original Ladizhichi, deep inside the exclusion zone. 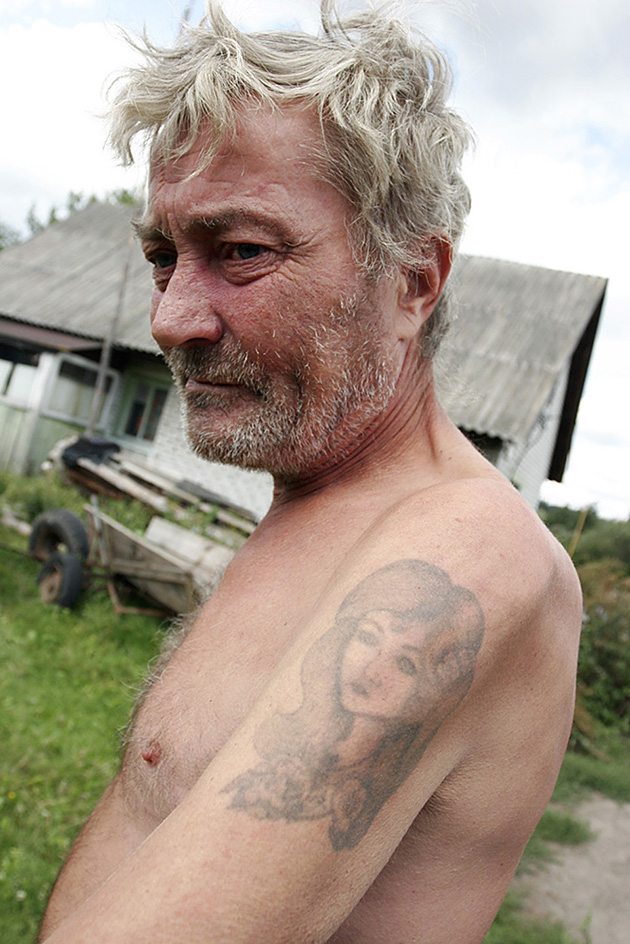 After Vasily Oleksandrovich’s wife Natasha died in January 2007, he had her face tattooed on his shoulder as a personal memorial. She died from cancer after a long illness, a few days after her 46th birthday. He now lives alone, farming a small plot of land on the outskirts of Ivankiv, the closest inhabited city to the Chernobyl Exclusion Zone.

I was born here and I’ll die here. I already want to die. Forgive me, I’m drunk. I drink a lot now. We only have what God gives us: our health, our place, our friends. —Vasily Oleksandrovich, farmer. 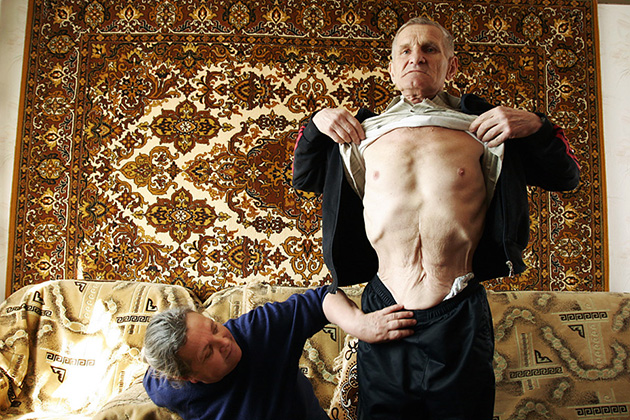 Viktor and Lydia Gaidak sit in their apartment in Desnyanskiy district at the outskirts of Kyiv. Viktor Gaidak worked for 24 years as an engineer at the Chernobyl plant, including nine years after the 1986 accident. In 2004, he had surgery for colon cancer. Today, nearly half the 49,360 evacuees from Pripyat live in Troeshchina, a new neighborhood at the edge of Kyiv, Ukraine, where they face health problems, unemployment, crowded apartments and insufficient government support.

When I was sick with cancer, we sold our car to pay for the surgery. We sold our TV, we sold our refrigerator, jewelry, everything we could. Now my wife Lydia has cancer and there’s nothing left to sell. —Viktor Gaidak, Chernobyl engineer. 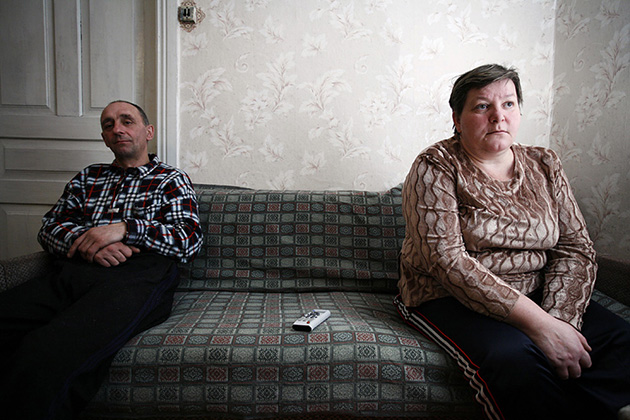 Sasha and Lyuba Boichuk watch a stand-up comedy TV show during the New Year’s holiday. At the time of the 1986 accident, Sasha and Lyuba were just starting to build this house in Sukachi. After some hesitation, they decided to continue building and have lived here ever since.

Sasha worked as a liquidator in the Chernobyl cleanup efforts. Afterward, he began to drink heavily, and says he lost a decade of his life to alcohol. He blames himself for the death of his son, who disappeared outside a local bar and is believed to have been murdered during a robbery. 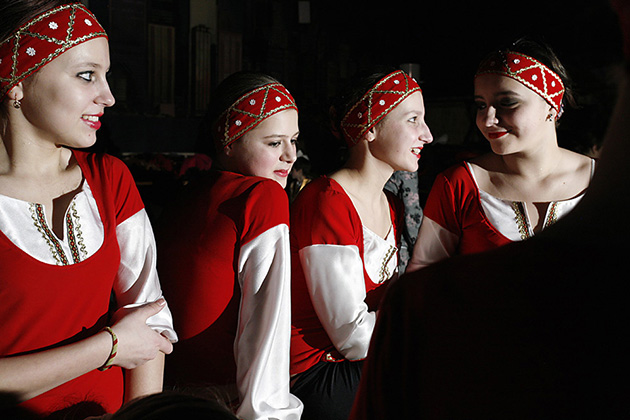 n Slavutych, Ukraine, teenage dancers wait backstage for their turn to perform during a city concert at the Kino-Concert Complex. The auditorium was full for the event organized by the Slavutych music school as a reprise of their successful concert in Kyiv.

Slavutych is the new city built after the Chernobyl accident to house evacuated power plant workers and support personnel. The Chernobyl plant once funded many programs in the city. Now the city is struggling with decreased resources due to layoffs at the Chernobyl plant. Nevertheless, the community continues to put an emphasis on educational opportunities for their children.

According to the mayor, Volodymyr Udovychenko, “The year the Chernobyl nuclear power plant’s last energy-producing unit was prematurely shutdown, Slavutych lived through a tragedy. A social tragedy.” 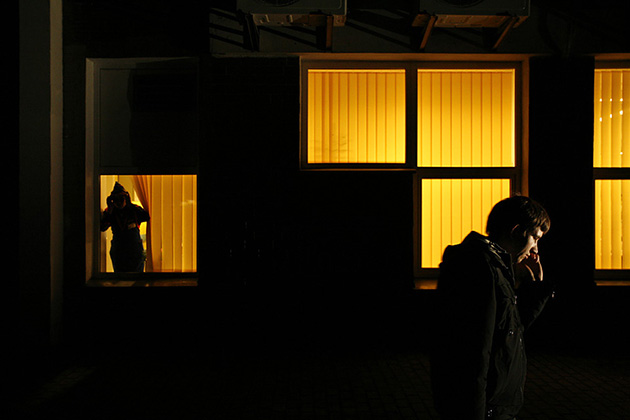 In the winter, it is still dark when the Chernobyl workers leave Slavutych and already dark again by the time they arrive home, passing Silpo supermarket as they leave the train station. Slavutych, Ukraine, is the new city built after the Chernobyl accident for evacuees from Pripyat. Nearly 4,000 out of the 25,000 inhabitants still work at Chernobyl today, commuting through Belarus on 3 special “elektrichka” trains that depart between 6:30 and 7:30 each morning. 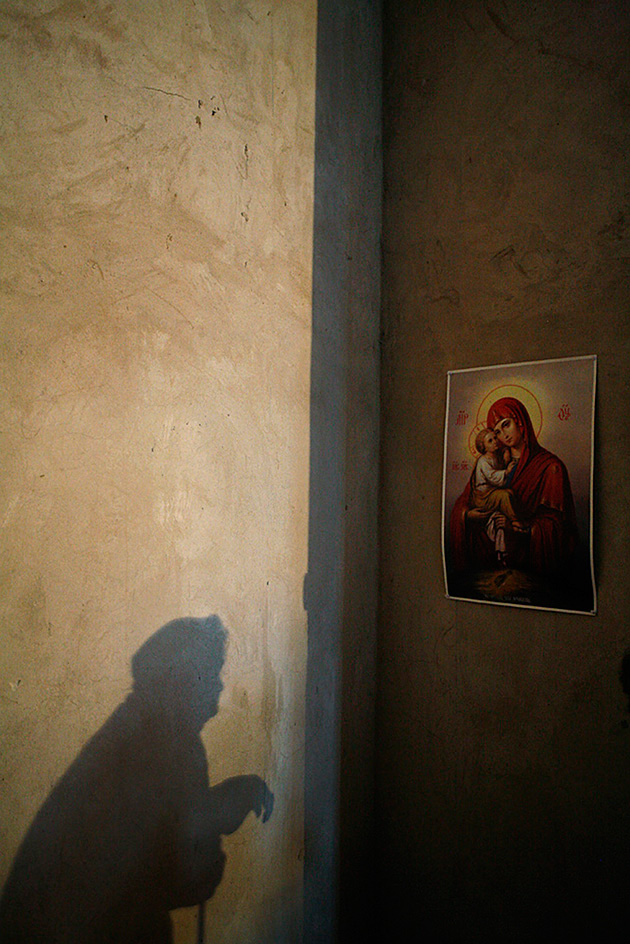 An elderly woman prays before a poster of Mary and Jesus while Father Momotyuk Nazarii leads a service at the small Ukrainian church in Novo Ladizhichi village. The church has been under construction for a full decade, as villagers have had trouble raising enough money to continue building.

Novo Ladizhichi was built to house evacuees from the original village of Ladizhichi following the 1986 Chernobyl accident. It was constructed by the Soviet government in 1987 at the edge of Sukachi village. Because the church is unfinished, it is decorated with temporary posters rather than paintings. 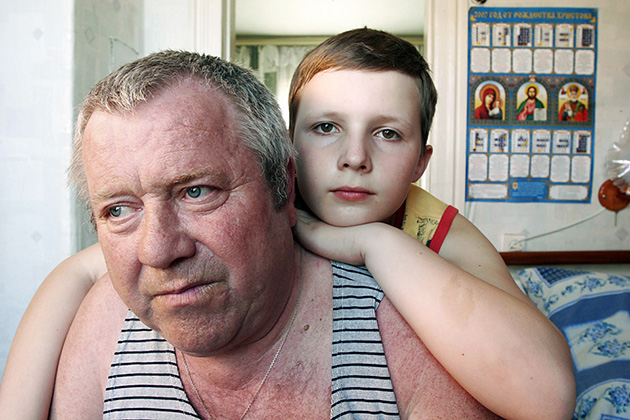 In 1986, Leonid Budkovskiy, then a mailman in Ivankiv, was reassigned to deliver top-secret mail to the military headquarters set up in Chernobyl town. He continued for four years out of a sense of duty, even after the four drivers he worked with all quit. His legs slowly stopped working and by 1996 he was confined to a wheelchair.

Currently, Budkovskiy spends most days sitting on his back stoop, overlooking his wife’s vegetable garden, getting help from his grandson Slava and other family members.

In Chernobyl, no one knew how serious it was. We wore no special clothes. I am 55 years old and no one needs me. I can still hold a spoon but I need help to go the bathroom and I have to wear diapers. — Leonid Budkovskiy, Chernobyl liquidator 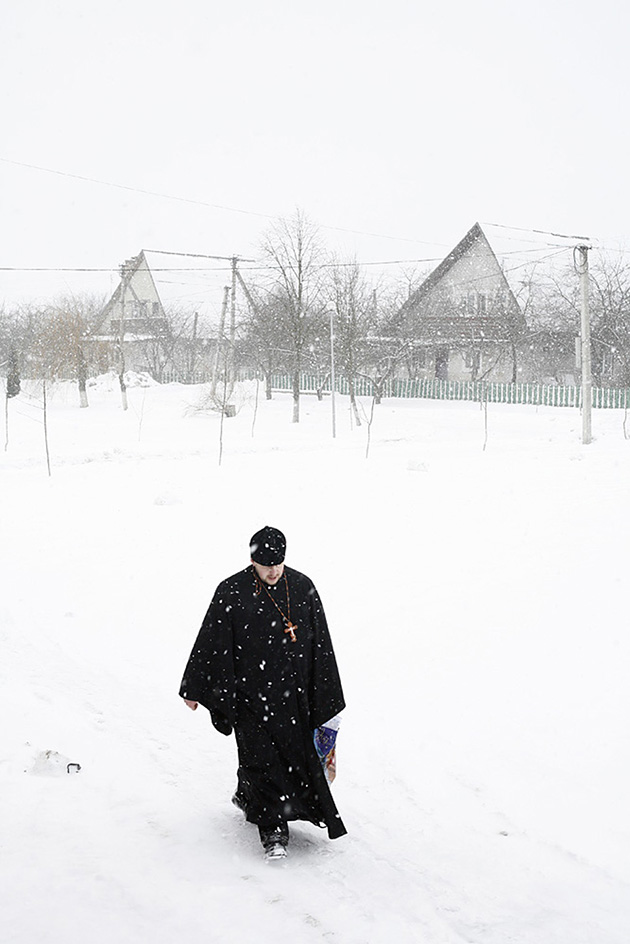 Father Momotyuk Nazarii, the village priest at the church in Novo Ladizhichi, Ukraine, goes Christmas caroling with members of his congregation to celebrate Ukrainian Orthodox Christmas, January 7, 2009. The group spent two days going door to door all over Sukachi and Novo Ladizhichi, singing, offering blessings, and collecting donations for the church. When people gave them candy and fruit, they redistributed it to children and elderly residents. Novo Ladizhichi was built in 1987 to house evacuees from the original village of Ladizhichi following the 1986 Chernobyl accident. 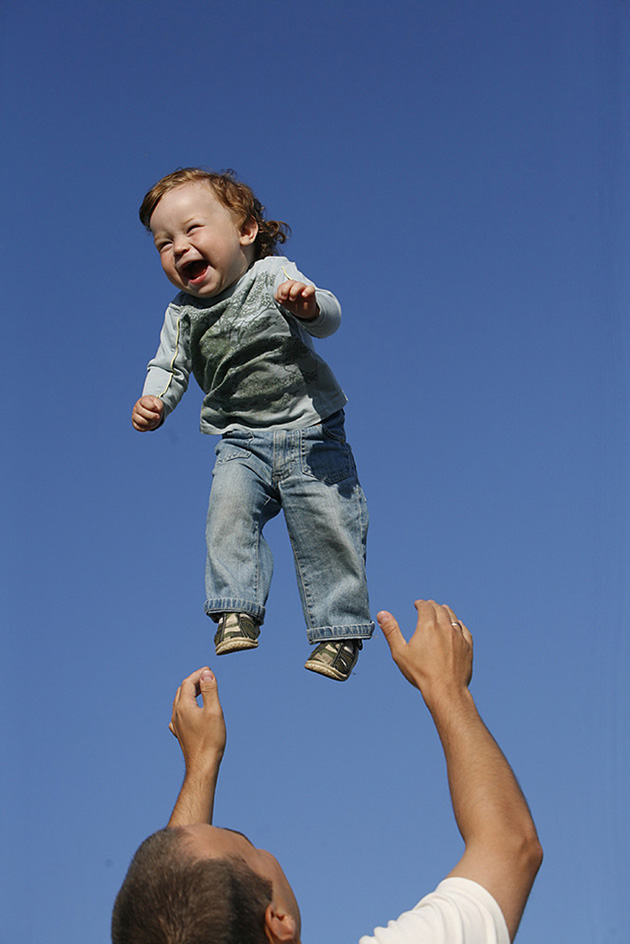 Andrei Balta throws his fifteen-month-old son Vanya in the air during a summer evening in Slavutych, Ukraine. Every evening, parents with babies and toddlers gather in the central square of Slavutych to socialize. Andrei and his wife Anna both work at the nearby Chernobyl Nuclear Power Plant, as do over 3,800 residents of Slavutych. 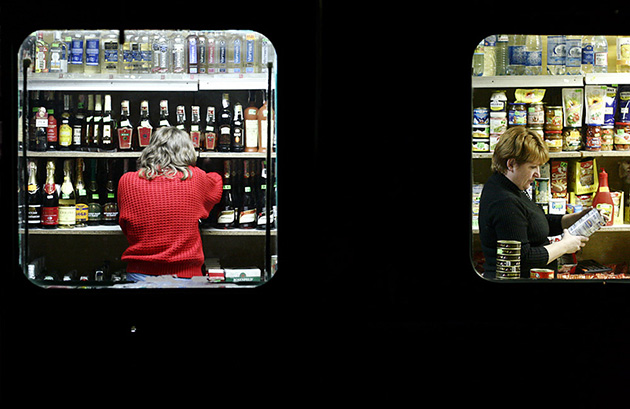 In Sukachi, Ukraine, a small food and liquor store in a converted trailer doubles as the village bar. The store’s two employees restock shelves and drink tea in the evening. They work up to twelve hours per day and earn about US$200 per month. Sukachi, a village of about 2,000, is south of the Chernobyl Exclusion Zone. 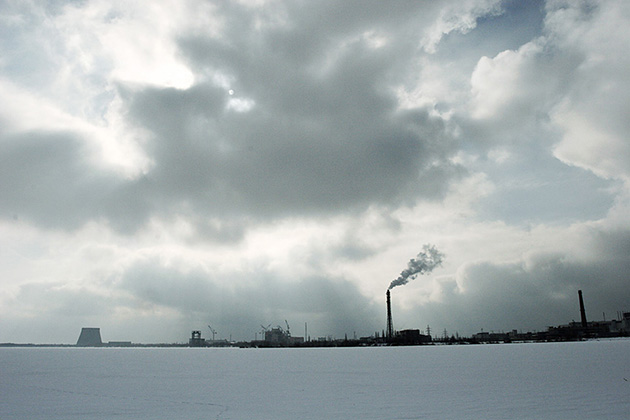 This photograph of the Chernobyl Nuclear Power Plant was taken from the far Northern bank of the plant’s cooling pond. Abandoned cooling towers stand to the left of a lone smokestack. At right, a sarcophagus covers the spot where a reactor exploded in 1986 during late night safety tests. The population within 30 kilometers was permanently evacuated.

Although the plant stopped generating electricity in 2000, today 3,800 employees continue to work there. They commute from the new city of Slavutych (population 24,300), which was built after the accident to replace Pripyat. 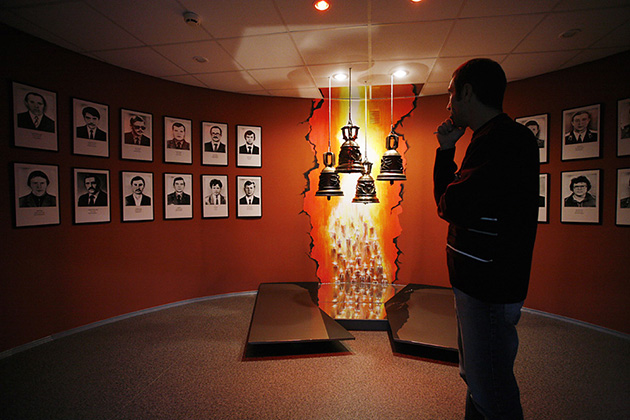 Former Chernobyl plant worker Sergii Kasyanchuk manages the Chernobyl Information Center museum. His health no longer allows him to enter the Chernobyl Exclusion Zone. He, like everyone else who worked at the plant, knows people who became ill or died due to Chernobyl. But this doesn’t stop their friends and family from working at the plant. Would it stop you?

For more on Michael Forster Rothbart’s After Chernobyl project, including an audio narration of the photos, check out afterchernobyl.com.