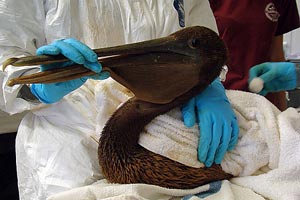 The federal government is now painting a rosy picture of the Gulf spill, reporting Wednesday that much of the oil has miraculously disappeared. The folks at the New York Times bought in, proclaiming, “US Finds Most Oil From Spill Poses Little Additional Risk.”

But the oil isn’t gone. More than 100 million gallons of it—at least nine and a half times more oil than the Exxon Valdez dumped—remain at the surface or dispersed undersea. And the government is still keeping crucial information about the extent of the damage a carefully guarded secret—from everyone except BP.

Under the federal code governing the damage assessment protocol, as the responsible party, BP is guaranteed a role in the process, and therefore has access to data that the government isn’t required to show the public. This privileged information, of course, gives BP an advantage, since the company now knows what it’s up against in court. In fact, BP has already hired a fleet of scientists to conduct its own assessment of the damage, which the company could use to challenge the government’s analysis. BP’s scientists have signed three-year confidentiality agreements, meaning they can’t disclose their data to the public.

Nine prominent scientists and marine researchers from groups and research institutions including the National Wildlife Federation, the Union of Concerned Scientists, and Florida State University sent a letter to Attorney General Eric Holder and BP CEO Robert Dudley on Tuesday calling for “full and timely transparency of all scientific information” related to the disaster. If the government released the damage data, local and regional conservation and environmental groups could provide valuable insight, said David Pettit, a lawyer with the Natural Resources Defense Council. But there’s no formal public input period until the government issues its draft restoration plan, which could take years.

While the government is releasing some data on wildlife deaths, it has not been forthcoming with more specific information, such as the species of birds, reptiles, and mammals that have been found coated in oil or dead. For example, the most recent tally from the US Fish and Wildlife Service, released Wednesday, states that 1,739 visibly oiled birds have been collected alive since the spill began April 20. FWS has also collected 3,478 dead birds, 1,504 of them visibly oiled. We have no idea, however, how many of those are species of birds that have been threatened or endangered, like the brown pelican, which was just taken off the endangered species list last year, or the piping plover, which is curently listed as endangered.

Reports from NOAA, which deals with collection of sea turtles and other reptiles, as well as dolphins and other mammals, are similarly vague. The latest tally shows 506 sea turtles found dead, though it doesn’t list how many of those are of the Kemp’s Ridley species, the most endangered species of sea turtle in the world. Of the 66 dead mammals listed, we don’t know how many are dolphins.

The federal government says more specific data will be made available—eventually. “We are working to ensure the quality of the data and we intend to make it publicly available as soon as we can,” said Kyla Hastie, public information officer at Fish and Wildlife. “We want to be right.”

The US Fish and Wildlife Serivce, a divison of the Department of the Interior, and NOAA are currently assessing the impacts of the spill through what is known as the Natural Resources Damage Assessment (NRDA) process for oil spills. Part of the Oil Pollution Act, which was passed in 1990 in response to the Exxon Valdez disaster, the NRDA requires the responsible party to pay for the restoration of damaged resources, including animals, land, air, and water supplies.

The Exxon case offers a good example of how arming only BP with crucial information might ultimately backfire. In 1991, Exxon struck a deal with the government to pay just $900 million in damages over 10 years. The deal also allowed the government to reopen the case, if it could prove that there were remaining problems that had not been adequately addressed. But the burden of proof was on the state and federal government to show that the loss or decline of habitat or species was directly related to the spill and could not have been forseen in the initial assessment. In 2006, when government and independent studies showed that Prince William Sound was still polluted, the Department of Justice and the State of Alaska filed a claim against Exxon, asking for an additional $92 million payment. But Exxon presented hundreds of its own studies that claimed that there was no ongoing environmental impact. Exxon prevailed, and never had to pay one cent more for the damage to the Prince William Sound, despite the fact that independent studies have found it has never fully recovered.

“Exxon cut themselves a good deal,” said Pettit. He warned that the public should expect the same from BP. “Everyone knows what the Exxon playbook was, and it worked.”

“Buying scientists indicates that [BP is] clearly going to fight an NRDA assessment,” said Aaron Viles, campaign director with the Gulf Restoration Network. The group’s president has been up in Alaska this week gathering insight from Alaskans on how to prepare. “We need to be able to fight back.”