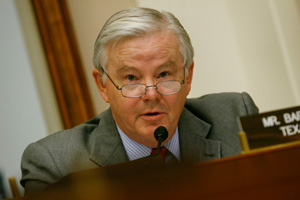 Back in 2005, Joe Barton (R-Texas), then the chair of the House Energy and Commerce Committee, made it his personal mission to investigate both climate science and climate scientists. Nicknamed “Smokey Joe” for his efforts to appease polluters, Barton has long made it clear he thinks the science on climate change is “pretty weak stuff.”

To prove that climate scientists have been wrong about their predictions, Barton and Rep. Ed Whitfield (R-Ky.) enlisted Edward Wegman, a statistician at George Mason University, to write a report evaluating studies of man-made global warming. The Wegman Report, released in 2006, has been much-touted by climate skeptics in the years since. But it now looks like large parts of the report used information that was plagiarized, pulled from Wikipedia, or taken out of context—and it appears that Barton’s office may have been feeding Wegman’s team the information to include in the report.

Wegman’s report primarily attacked the “hockey stick chart,” first published in a 1998 report co-authored by climate scientists Michael Mann (now of Pennsylvania State University), Raymond Bradley of the University of Massachusetts, and Malcolm K. Hughes of the Laboratory for Tree-Ring Research at the University of Arizona. The chart grew much more notable after it was included in the 2001 report from the Intergovernmental Panel on Climate Change, and a version of it was featured in the movie An Inconvenient Truth several years later. But in a searing piece in USA Today, reporter Dan Vergano reveals numerous problems with the Wegman report. Studies of the 91-page text “found repeated instances of passages lifted word for word and what appear to be thinly disguised paraphrases,” the piece notes.

Much of the reportedly plagiarized text came from a book written by Bradley, who has asked George Mason University to investigate the matter. Analyses of the text show that some phrases were largely reproduced, and at some points tweaked in order to change the meaning. This was revealed in a lengthy report from retired computer scientist John Mashey of California, who concluded that 35 of the report’s 91 pages “are mostly plagiarized text, but often injected with errors, bias and changes of meaning.”

Mashey’s takedown of the Wegman report also points to evidence that Barton’s staff was feeding Wegman’s supposedly unbiased team of scientists material to use in the report. Mashey found a presentation (PDF) online from Wegman report co-author Yasmin Said of Johns Hopkins University chronicling the team’s “Experiences with Congressional Testimony.” The presentation notes that Wegman’s group met with Barton staffer Peter Spencer, who delivered a “daunting amount of material” to use in compiling the report, and that Wegman and his team were charged with evaluating whether criticism of the Mann-Bradley chart was “meritorious.” The presentation also notes that Barton’s staff saw themselves as “‘referees’ in the Hockey Game”—even though none of those involved had “any real expertise in paleoclimate reconstruction.”

Wegman has denied that his team was being primed by Barton’s staff. “Although Dr. Said’s presentation seemed to imply that we were being coached by the Republicans being given only their selected materials to look at, this was not true,” Wegman told USA Today in response to a Freedom of Information Act request. Barton’s office did not respond to Mother Jones‘ request for comment about the charge that they were feeding information to Wegman’s team.

Mashey, though, says all signs point to Barton’s office having “manipulated, manufactured” information for the Wegman report. He notes that the report relied heavily on a paper criticizing the hockey stick graph written by two Canadians with no background in climate science, mining consultant Stephen McIntyre and economist Ross McKitrick. McIntyre confirmed in an interview that the Wegman team contacted him for information for their report. However, Mann—the scientist whose work they questioned—was never asked to provide information to the team.

Subsequent studies have found while there was some valid criticism of the statistical methods in the original graph, the McIntyre-McKitrick paper introduced some of its own errors and reached a flawed conclusion. The paper does not, in fact, invalidate the hockey stick—particularly since numerous other studies have reinforced the Mann-Bradley findings. Moreover, Mann and his colleagues acknowledged in the original paper that there are uncertainties and that further study was needed on the subject, and they later issued updates to their findings in response to some valid criticism—but that’s all part of the scientific process.

That nuance, of course, was lost in the Wegman report. It’s also worth noting that Barton’s enlisting of Wegman to conduct the report is also outside of typical protocol for committees looking for an independent read on scientific disputes. Congress will generally request a report from the National Research Council, a branch of the National Academies, when there is disagreement on an issue like multiple climate studies. Ralph Cicerone, president of the National Academy of Sciences, wrote to Barton in July 2005 offering the Academies’ services. But rather than asking the NRC to review the science, Barton asked Wegman to write the report.

The chairman of the Committee on Science and Technology at the time, Sherwood Boehlert (R-N.Y.), criticized his colleague’s multiple attempts to undermine the science as “misguided and illegitimate.” Boehlert wrote in a July 2005 letter to Barton, “[Y]ou have taken a decidedly different approach—one that breaks with precedent and raises the specter of politicians opening investigations of any scientist who reaches a conclusion that makes the political elite uncomfortable.”

So Boehlert requested an NRC study on the reconstruction of surface temperature records. The NRC report largely supported the work of Mann and Bradley, noting that while there may have been some justifiable questions about statistical methods and that some uncertainties “have been underestimated,” there was nevertheless “an array of evidence” supporting the main conclusion of their work. (Boehlert, now retired, penned an op-ed in the Washington Post last week criticizing his party for willfully ignoring the science on climate change.)

Aaron Huertas, press secretary for the Union of Concerned Scientists, also questioned the role Barton and his staff played in shaping the report and called it “an abuse of the power of Congress” to put out a shoddy report for the sole purpose of lobbing baseless attacks at climate scientists. “If something that doesn’t meet basic academic scrutiny is being put out there with the congressional seal on it, then that’s a problem,” said Huertas.

Despite his repeated attacks on the very premise of global warming, Barton has tried to claim that all he wants is an independent evaluation of the science. At a stop at the international climate negotiations in Copenhagen last year, Barton claimed that “the premise that mankind, through the emissions of CO2, is causing the planet to warm…has never been independently analyzed or tested by any scientific group.” He asserted that “credible” scientists should look at the evidence, and, in response to a question about who that might include, suggested the National Academy of Sciences—failing to note of course that the NAS had done as much, despite the fact that he has rejected their research on the subject.

Barton and other Republicans have frequently cited the Wegman report as proof that scientists are cooking the books on global warming. The report is also cited heavily in the court filings of crusading Virginia Attorney General Ken Cuccinelli, who has repeatedly tried to force the University of Virginia, Mann’s former employer, to hand over documents that he believes will demonstrate that the scientist committed “fraud” in his research. Cuccinelli mentions the Wegman report five times in one subpoena of Mann’s documents and email.

The report is now four years old, but Barton might be getting another turn to fire at climate scientists from the bully pulpit as chairman of one of the top committees with jurisdiction on climate and energy policy. While caucus rules typically limit Republicans to three terms, Barton is seeking a waiver so he can again serve as chairman of the Energy and Commerce Committee. Several other incoming leaders of key committees have already indicated they would like to replicate the kind of investigation into climate science next year.

Meanwhile, Barton continues to tout his “investigations” into Mann and other scientists. He wrote a letter to the editor of the Washington Post last month in response to a column from Mann that criticized Barton and others for politicizing the science, and again went after Mann: “I think Mr. Mann is entitled to make up his own mind, but not his own truth.” All the evidence coming in about the Wegman report indicates that someone was bent on making up the truth, and it wasn’t Mann.