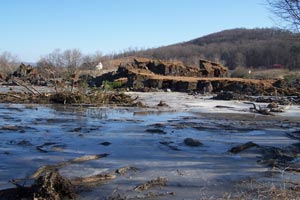 It has been two years since an earthen dike holding back 1.1 billion gallons of coal slurry ruptured, unleashing a tsunami of dark gray sludge from the Tennessee Valley Authority’s Kingston Fossil Plant in Harriman, Tennessee. The wave destroyed homes, surged into the yards of neighbors, and caused the nearby ponds and streams to overflow. More than 300 acres of land were covered in the stuff, and in the weeks after, the ash would travel as far as 30 miles downstream on the nearby Emory River. Locals refer to the “ash bergs” up to 40 feet tall that landed in their yards and floated down the river.

The environmental disaster for the first time raised the question of why coal-burning power plants are allowed to dump the fly ash waste—the fine, dust-like particles emitted when coal is burned to create power—into vast open pits. The ash, doused with water and left in these containment ponds for years, contains toxic elements like arsenic, mercury, and lead. But for decades, the disposal of the waste was left unregulated. Power plants produce more than 130 million tons of the ash each year, and while 43 percent of it gets recycled into products like cement and wallboard, much of the rest remains on site at coal-fired power plants around the country.

Sarah McCoin, a 55-year-old benefits consultant, lives about a mile and a half from the plant, on a 40-acre horse farm that has been in her family for nine generations. The night the dike burst, she heard the sirens of emergency responders and saw spotlights shining down from aircraft overhead, but didn’t know what happened. The next morning, she heard on the local news that there had been a mudslide, and she found that it had taken out the road leading to her house.

But one look at the gray gunk made it clear that this was no ordinary mudslide. McCoin found snapped telephone poles and grim-faced neighbors in the wake of what was later described as a “tidal wave” of slurry. It was enough liquid to fill 1,666 Olympic-size swimming pools. They finally finished dredging ash from the bottom of the river in early December, almost two years after the spill. While residents were first told it would take four weeks to clean up, the estimates now are more like four years. The catastrophe is expected to cost the Tennessee Valley Authority (TVA) up to $1.2 billion, though environmental economists have said the true cost for all the damage—the pollution in the river and the human health problems caused by dumping a billion gallons of toxic sludge into backyards—is likely more than $4 billion.

Most of McCoin’s neighbors who were displaced by the spill have settled with the TVA and moved on. McCoin’s farm is just beyond the boundary between homes that the TVA has bought, and she’s not looking to move, anyway, she says. She and others downstream from the spill have filed a number of lawsuits, seeking compensation for the environmental and health hazards of living in an area contaminated with coal ash, which according to studies comes with a cancer risk nine times greater than smoking a pack of cigarettes a day. Just last week there was news of a leak at another containment pond on the site—which the TVA says was just a “small” trickle of rainwater. “I’m not buying it,” says McCoin.

Which leads, of course, to the bigger question—why are utilities still allowed to dump the waste in these pits? In the wake of the TVA spill, EPA Administrator Lisa Jackson—who wasn’t yet even sworn in at the time—pledged to revisit the question of regulating coal combustion waste. In the months after, EPA identified 431 containment units for coal slurry at 162 sites around the country and has labeled 49 of them “high hazard”—meaning they pose a risk to human health and the environment.

In October 2009, the agency issued a proposed rule that would have designated the ash as hazardous waste that needed special handling and would be regulated at the federal level. But when the rule emerged from the White House Office of Management and Budget (OMB) seven months later, there were two potential new rules for public comment: The first (and more stringent) option would categorize coal as a “special waste” and require extra care in the disposal of the waste and tough federal oversight. But the second option is much more lenient: It would allow power plants to continue treating coal combustion waste as nonhazardous, and would leave regulation largely to individual states. Environmental groups worry that the second alternative arose after industry groups and other government agencies lobbied for a weaker rule.

The original draft rule EPA sent to OMB stated that labeling ash as nonhazardous “would not be protective of human health and the environment.” Then, eight months later, the agency changed its mind: “After extensive discussions, the Administrator decided that both the options merited consideration for addressing the formidable challenge of safely managing coal ash disposal,” the agency said in a statement to Greenwire at the time. It’s clear that the Obama administration was under a good deal of pressure to issue a more lax rule. OMB held nearly 50 meetings on the rule, approximately 30 of them with industry groups, compared to a dozen with environmental groups, according to OMB’s own records. The review period far exceeded the typical 90 days granted for proposed rules at the OMB’s Office of Information and Regulatory Affairs says Matt Madia, a regulatory policy analyst for the group OMB Watch.

One of the main points of pressure has come from the coal ash recycling industry, which buys the waste from some utilities and uses it for a variety of purposes—cement, wall board, kitchen counters, fill for construction and roadways, fertilizers for agriculture. Coal waste recyclers have even promoted it as an additive for toothpaste. The recycling industry has argued that labeling the waste hazardous would create a stigma for their products—no one will want products that contain something perceived as dangerous.

The utilities say they’re just looking out for recyclers. “There are significant concerns about liability related to product designated as ‘special’ or ‘hazardous,'” says Dan Riedinger, a spokesman for the Edison Electric Institute, the largest trade group representing utilities. “No one wants to look at the walls in their house, the wall board made of gypsum, and think, ‘Gee, some of that material in the wall board EPA considers to be hazardous.'” Edison and a number of individual utilities have argued that the nonhazardous label and state-level regulations are adequate.

But dealing with the waste more responsibly could also be expensive for the industry. Ken Ladwig of the Electric Power Research Institute, an independent research organization for the electric power sector, said labeling the waste hazardous could cost the industry between $55 billion and $75 billion over the next two decades. But Frank Ackerman, an environmental economist and director of the Climate Economics Group at the Stockholm Environment Institute, points out that “under any reasonable scenario, the stricter regulation has the greater quantified monetary benefits to society.”

Even if dams don’t burst, unregulated coal ash disposal poses health risks to humans and the environment, as the toxic materials have been found to leach into groundwater at containment sites. An assessment prepared for the EPA noted that the cancer risk from drinking water contaminated with arsenic—just one of the many hazardous substances in the ash—is 1,800 times EPA’s regulatory limit. The Environmental Integrity Project has been looking extensively at data on contamination, identifying 137 sites where toxic materials have leached into the groundwater. At some sites, they found arsenic and other heavy metals at up to 145 times what is permissible under federal guidelines. If EPA kicks in tougher federal regulations, these sites would be monitored more closely. “A lot of these guys are sitting on what really amounts to a Superfund site,” says Eric Schaeffer, executive director of the EIP and the former head of the EPA’s Office of Regulatory Enforcement.

The public comment period on the two options for regulating the waste closed on November 19, and the EPA says it logged more than 400,000 comments on the rule. The agency has not offered a timeline for announcement of the final rule. Most observers aren’t expecting it until the end of 2011 at the earliest—cold comfort to communities like Harriman that have millions of gallons of this stuff right in their backyards.

“Two years after the largest toxic spill in the nation’s history, there is still no regulation of deadly coal ash dumps—nor is there clear direction from EPA on the timing or content of a final rule,” said Lisa Evans, senior administrative counsel for Earthjustice. “For the communities enduring damage from aging ponds and leaking landfills, time has run out. There is no reason on earth that their health should be compromised by such an easily avoidable harm.”