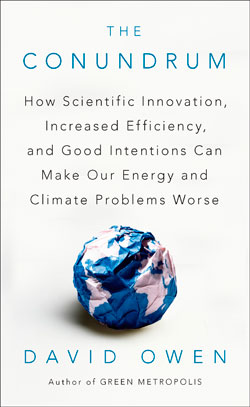 What we perceive to be “easy” environmental solutions—energy efficiency, natural gas, high speed rail, and even solar panels—won’t actually fix the problems they’re trying to solve. Ultimately, we need to reduce our consumption of limited resources, author David Owen argues in his new book, The Conundrum. The conundrum being that we already know how to reduce consumption; we just don’t like the answers. Owen, who first argued that efficiency can’t solve our energy woes in a 2010 New Yorker article about the Jevons Paradox, the problem is thus: When we make things (like energy) cheaper we end up using more of them. That article spurred a lot of debate; and The Conundrum picks up where it left off.

Any new technology, no matter how big a breakthrough, is counterproductive if it encourages more consumption of limited resources, Owen argues. Consider high speed rail. More efficient transportation encourages us to travel more—when, really, the environment would be better off if we just stayed home. If that seems harsh, it’s because Owen’s sustainability test is a strict one, where the only activities that can pass are those that 9 or 10 billion people can engage in. Buying green products might be better than nothing, but not by much: in fact, Owen argues, it amounts to little more than “self-deception” on the part of those who see their “luxury preferences as gifts to humanity.”

Owen’s unflinching perspective is particularly refreshing today, when even Guantanamo Bay claims to be “going green.” Still, wouldn’t a transition to renewable energy sources allow us to use all the energy we want? Not really, Owen argues—because most fossil fuels provide more concentrated power than most renewables, without reductions in overall power use, “renewables would never be able to keep up.” Moreover, large-scale solar array and wind farms come with their own environmental risks, like habitat loss. And even if you could run your iPhone on a built-in solar panel, the constant demand for new products will keep us tearing through other resources, like rare earth metals, at a furious pace. “Lots and lots of brilliant people are working very hard, right now, to turn those products into landfill,” Owen says of the Kindle and iPad before visiting the Consumer Electronics Show, where he sees thousands of other devices doomed for the dustbin. Which leaves us with an unwelcome question: “How appealing would ‘green’ seem if it meant less innovation and fewer cool gadgets—not more?”

In fact, living “green” may mean changing a lot of habits we’ve come to take for granted. To reduce consumption, Owen suggests, we need to drive less, travel less, eat less meat, buy less stuff, and live in smaller homes. He calls the automobile “Global Environmental Enemy No. 1,” describes income inequality as “a global generator of environmental harm,” and declares that “dense, efficient, intelligently organized cities are the future of the human race.” In fact, Owen says, the whole concept of permanent economic growth is “the equivalent of believing in perpetual-motion machines and Ponzi schemes.” All of which means we’ve got a lot more to change than just the brand of paper towels we use.

Owen concedes that efficiency and innovation aren’t bad in and of themselves; efficiency and innovation can help us live well on less. But we still have to reduce our overall consumption. And that’s the trick: “Turning reduced waste into reduced consumption is a trick we haven’t yet figured out,” he writes, adding, “almost all of the serious environmental problems we face now are the direct or indirect consequences of what seemed, originally, like awfully good ideas.” (Ahem, geoengineers.) Indeed, efficiency and innovation have led to unintended consequences in the past. As evidence Owen points to the invention of transistors in 1947, which at the time was seen as “a brilliant breakthrough in efficiency, dematerialization, and decarbonization.” But over time, transistors enabled the explosion of consumer electronics—which today use huge quantities of energy doing tasks that were once unimaginable.

Owen acknowledges that reducing consumption is a tough sell. That’s in part why energy efficiency is oft-touted by politicians, he suggests, while measures designed to cut consumption by increasing costs—like carbon taxes—are beloved mostly by economists. In this sense, he says, the 2008 recession “put time back on the carbon clock” (about four days’ worth). But his argument stops short of offering solutions about how to get people excited about cutting back consumption during a time when they’re already feeling the pinch.

Are we ready to relinquish the idea that we can innovate ourselves to a better tomorrow? If faced with a choice between what Jevons himself described as “brief but true greatness and longer continued mediocrity,” will we pick the latter? Owen concludes:

How likely would the 9 billion human residents of the world be, in the absence of any signs of worsening climate stress, to permanently endure, decade after decade, the continuing sacrifices required to maintain the new status quo—the halted growth, the forgone consumption, the reduced mobility, the population control, the willing abandonment of vast known reserves of fossil fuels?

It’s a sobering end to a book that’s full of hard questions and uncomfortable answers. The Conundrum should unsettle anyone who assumes their lifestyle is eco-friendly; whether that’s enough to prompt change, though, might be the toughest question of all.