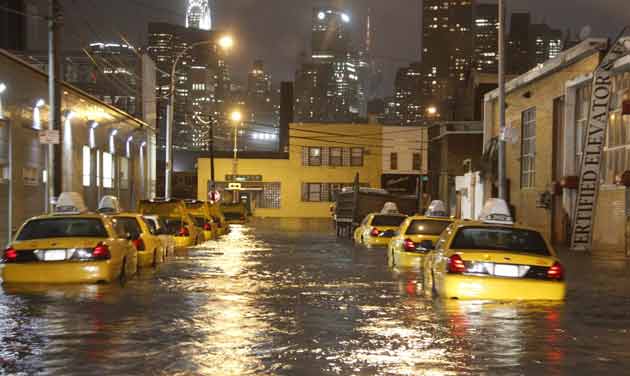 In 2007, I published a book called Storm World: Hurricanes, Politics, and the Battle Over Global Warming. It was inspired by what my family had been through in Hurricane Katrina (I’m from New Orleans), but at the end, I looked forward to what other families and other cities might have to experience—if we don’t start to think in a much broader way about our society’s stunning vulnerability to hurricane disasters.

Even as we act immediately to curtail short term vulnerability, every exposed coastal city needs a risk assessment that takes global warming scenarios into account…Scientists at the NASA Goddard Institute for Space Studies in New York have been studying that city’s vulnerability to hurricane impacts in a changing world, and calculated that with 1.5 feet of sea level rise, a worst-case-scenario Category 3 hurricane could submerge “the Rockaways, Coney Island, much of southern Brooklyn and Queens, portions of Long Island City, Astoria, Flushing Meadows-Corona Park, Queens, lower Manhattan, and eastern Staten Island from Great Kills Harbor north to the Verrazano Bridge.” (Pause and think about that for a second.)

No need to pause and think any longer—last night, just over five years later, much of it came to pass. And indeed, climate change, a topic embarrassingly ignored in the three recent presidential debates, made it worse.

Last night, southern Manhattan reportedly received a 13.88 foot storm surge, a record high and more than enough to flood much of the city. We’ve all seen the pictures. What’s more, according to Ben Orlove, director of the Master’s Program in Climate and Society at Columbia University, about a foot of that surge would not have been there if not for the sea-level rise already caused by climate change over the course of the 20th century.

So, yes, we knew. We knew well ahead of time that this could happen, and we knew global warming was already making it worse. We knew, but we did virtually nothing. (Well, New York did empanel a sea level rise task force, which put out a report—and you can see how that turned out.)

But it’s not just about what we knew—it’s also what we know going forward. We know that if you think this is bad, well, global warming will make it still worse in the future.

Take a recent Nature study by climate scientists at MIT and Princeton, looking at future storm surge scenarios under climate change. The researchers used multiple computer model runs to simulate a variety of storm surges hurled at New York City—explicitly looking at future climate and sea level rise scenarios. By 2100, New York is projected to experience between .5 and 1.5 meters of sea-level rise. Taking the midpoint of this estimate, or a 1 meter sea-level rise, the paper found that what is currently a 100 year storm surge event for New York could become a 20 year event by 2100.

In other words, scientists say, the risk of the “rise of the oceans” is steadily going to increase. And when the next disaster happens, we’ll again realize that they told us so. Just like they did before Katrina, and before Sandy…and before the next big one, whenever it is.

The point is that we have a terrible track record of dealing with long range risks in this country. This is exacerbated by a presentist, science-phobic mindset on full display in the saga of 2012 presidential debates—which now, in the wake of Hurricane Sandy, now look utterly inane. The debates completely ignored climate change—and then much of Manhattan was flooded. So do we really think that Jim Lehrer, Candy Crowley, and Bob Schieffer are the sort of journalists that ought to be steering conversations between our presidential candidates? And if not, why not?

My answer is simple: Because these people aren’t science minded. They treated climate change as a “boutique issue,” something only of interest to some small band of “climate change people“—and in so doing, they proved they simply aren’t in tune to what is really happening to this country and the planet.

Thus far in America, we’ve gotten the national conversation that we deserve—and the consequence is that we feel blindsided by disasters that somehow never came up until it was too late. In the wake of Sandy, then, how about a resolution? This time around, let’s all vow to think about the future, and about climate change, before the next tragedy strikes.