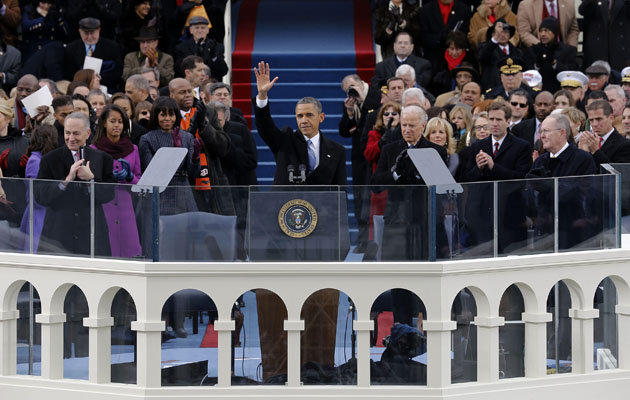 This story first appeared in the Guardian and is reproduced here as part of the Climate Desk collaboration.

Barack Obama said more about climate change in his inauguration speech—and expressed it more forcefully—than he did at any point in the 2012 election campaign and during much of his first term.

Climate change occupied a significant chunk of Monday’s speech, and Obama did not stint on the language, suggesting it was a religious and patriotic duty to deal with the challenge.

“We will respond to the threat of climate change, knowing that the failure to do so would betray our children and future generations,” Obama said. He made a carefully calibrated appeal to Republicans, situating a transition from fossil fuels to clean energy in a religious and conservative framework of God and constitution.

“That is how we will preserve our planet, commanded to our care by God. That’s what will lend meaning to the creed our fathers once declared,” Obama said.

It was the most Obama had said on climate change for some time, and it was a stronger affirmation of the science underlying climate change than Obama has offered on other occasions.

“Some may still deny the overwhelming judgment of science, but none can avoid the devastating impact of raging fires and crippling drought and more powerful storms,” Obama said.

The language and reaffirmation of climate science won praise from environmental groups. “This is a call to action against the climate chaos that is sweeping our nation and threatening our future. Now it’s time to act,” Frances Beinecke, the president of the Natural Resources Defense Council, said in a statement.

However, campaigners pressed Obama for more. Unlike Obama’s first four years, when even a glancing mention of climate was seen as an achievement, environmental groups pushed the president for specifics.

“Today’s address is an important first step for using the power of the presidency to spur a practical national conversation on climate change. The importance of the president regularly raising his voice on this issue cannot be overstated,” said Lou Leonard, who heads climate change for the World Wildlife Fund.

But his statement added: “A sustained national conversation isn’t enough. The president should lay out the steps he can and will take to clean up our energy system, help communities prepare for climate disruption and encourage the rest of the world to ramp up action.”

The BlueGreen Alliance, while praising Obama for elevating the topic, also called on Obama to direct the Environmental Protection Agency to regulate existing power plants.

Campaigners have limited hopes for Obama’s second term, because of Republicans’ control of the House of Representatives.

But they have been looking to Obama to speak out about the importance of climate change, urging him to adopt it as a legacy issue.

Monday’s speech was a step in that direction. It was harder-edged than Obama’s first inaugural address, when his single line on climate change promised: “We will harness the sun and the winds and the soil to fuel our cars and run our factories.”

This time around, Obama acknowledged the difficulties ahead. But campaigners said they were looking to the State of the Union address next month to see whether Obama follows up with specific policy promises.

Obama in his first State of the Union address in 2009 called on Congress to put a cap on carbon. “To truly transform our economy, protect our security, and save our planet from the ravages of climate change, we need to ultimately make clean, renewable energy the profitable kind of energy,” Obama said at the time.

By the 2012 State of the Union address, however, Obama was routinely discussing the potential of clean energy industry without even bothering to mention climate change.

On Monday, the two were linked once again. “The path towards sustainable energy sources will be long and sometimes difficult. But America cannot resist this transition. We must lead it,” he said. “We cannot cede to other nations the technology that will power new jobs and new industries—we must claim its promise,” he said.

“That is how we will maintain our economic vitality and our national treasure—our forests and waterways, our croplands and snowcapped peaks. That is how we will preserve our planet, commanded to our care by God. That’s what will lend meaning to the creed our fathers once declared.”

Obama has been reaching out to environmental groups since his re-election. On Sunday night, Joe Biden, made a brief surprise visit to the Green inaugural ball. “I don’t intend on ending these four years without getting an awful lot more done,” he told the crowd. “Keep the faith.”