Over at The Corner, Kathryn Jean Lopez writes that the “untold story” of today’s inauguration is the number of conservatives who have “resisted the urge to rain on the president’s parade today.” Her colleagues, apparently infuriated by this 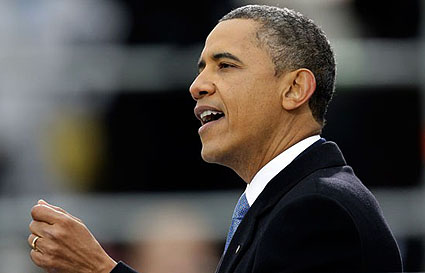 act of appeasement, immediately proceeded to unleash a virtual deluge on the president’s parade.

I was amused by that, but then, I’m easily amused. And anyway, I don’t blame them. I’ve heard a lot of chatter today from liberals about how Obama’s inaugural address was “Lincolnesque,” but I think that’s just a wishful reading of what he actually said. Sure, there were plenty of soaring phrases about “we the people” and America’s limitless possibilities, and it was nice to hear the first ever shout-out to “our gay brothers and sisters” on inauguration day, but overall it was pretty familiar stuff for a modern inaugural address.

What wasn’t so familiar was the number of very sharp, very specific barbs aimed at Obama’s political opponents. Here’s a taste:

To Mitt Romney: “The commitments we make to each other through Medicare and Medicaid and Social Security….do not make us a nation of takers.”

To the climate change denialists: “Some may still deny the overwhelming judgment of science, but none can avoid the devastating impact of raging fires, and crippling drought, and more powerful storms.”

To the neocons: “We, the people, still believe that enduring security and lasting peace do not require perpetual war.”

To the voter suppression gangs in Pennsylvania, Ohio, and elsewhere: “Our journey is not complete until no citizen is forced to wait for hours to exercise the right to vote.”

To the NRA: “Our journey is not complete until all our children, from the streets of Detroit to the hills of Appalachia to the quiet lanes of Newtown, know that they are cared for and cherished and always safe from harm.”

To the entire tea party wing of the GOP: “We cannot mistake absolutism for principle or substitute spectacle for politics, or treat name-calling as reasoned debate.”

Did conservatives take these lines as obvious, personal attacks? You betcha. I would too, if I were them. And while this stuff may have warmed the cockles of my heart, I don’t pretend to have the boundless political generosity of Abraham Lincoln. It appears that Obama, if he ever did, doesn’t have it anymore either.