Last week, a much-discussed new paper in the journal Nature seemed to suggest to some that we needn’t worry too much about the melting of Greenland, the mile-thick mass of ice at the top of the globe. The research found that the Greenland ice sheet seems to have survived a previous warm period in Earth’s history—the Eemian period, some 126,000 years ago—without vanishing (although it did melt considerably).

At Monday’s Climate Desk Live briefing in Washington, DC, Box, who has visited Greenland 23 times to track its changing climate, explained that we’ve already pushed atmospheric carbon dioxide 40 percent beyond Eemian levels. What’s more, levels of atmospheric methane are a dramatic 240 percent higher—both with no signs of stopping. “There is no analogue for that in the ice record,” Box said.

And that’s not all. The present mass scale human burning of trees and vegetation for clearing land and building fires, plus our pumping of aerosols into the atmosphere from human pollution, weren’t happening during the Eemian. These human activities are darkening Greenland’s icy surface, and weakening its ability to bounce incoming sunlight back away from the planet. Instead, more light is absorbed, leading to more melting, in a classic feedback process that is hard to slow down.

“These giants are awake,” said Box of Greenland’s rumbling glaciers, “and they seem to have a bit of a hangover.” 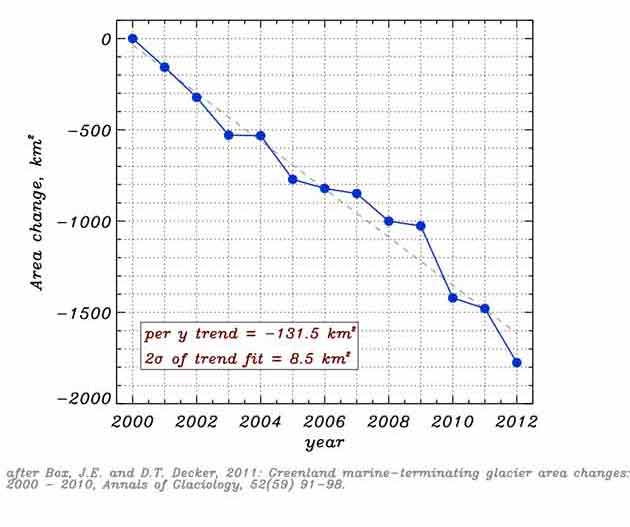 To make matters worse, there’s also Antarctica, the other great planetary ice sheet, which contains 10 times as much total water as Greenland—much of which could also someday be translated into rising sea level. While Greenland is currently contributing twice as much water to sea level rise as Antarctica, that situation could change in the future. It’s kind of as though we’re in a situation of “ice sheet roulette” right now, wondering which one of the big ones will go first.

Box also provided a large-scale perspective on how much sea level rise humanity has already probably set in motion from the burning of fossil fuels. The answer is staggering: 69 feet, including water from both Greenland and Antarctica, as well as other glaciers based on land from around the world. 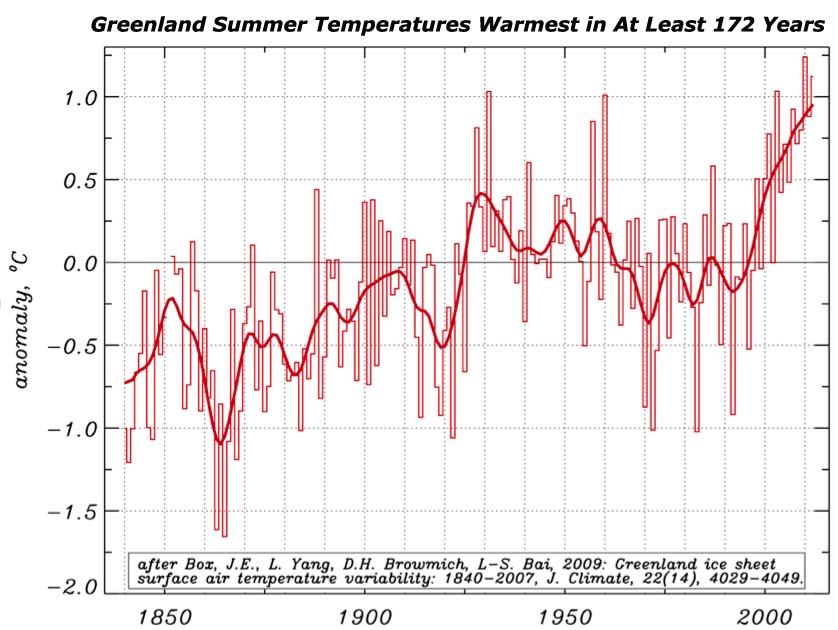 Scientists like Box aren’t sure precisely when, or how fast, all that water will flow into the seas. They only know that in past periods of Earth’s history, levels of atmospheric greenhouse gases and sea levels have followed one another closely, allowing an inference about where sea level is headed as it, in effect, catches up with the greenhouse gases we’ve unleashed. To be sure, the process will play out over vast time periods—but it has already begun, and sea level is starting to show a curve upward that looks a lot like…well, the semi-notorious “hockey stick.“

So what can we do? For Box, any bit of policy helps. “The more we can cool climate, the slower Greenland’s loss will be,” he explained. Cutting greenhouse gases slows the planet’s heating, and with it, the pace of ice sheet losses.

In the meantime, to better understand where we’re headed, Box has launched a scientific project called “Dark Snow,” which seeks to crowdfund a Greenland expedition to help determine just how much our darkening of the great ice sheet in this unprecedented “Anthropocene” era will push us well beyond Eemian territory. The video for that project is below. If the remote, dangerous science of ice sheets intrigues you enough (or scares you enough), then you definitely will want this research to succeed.

Correction: An earlier version of this chart contained a metric system conversion error that resulted in an inaccurate Y-axis. The chart has since been fixed.