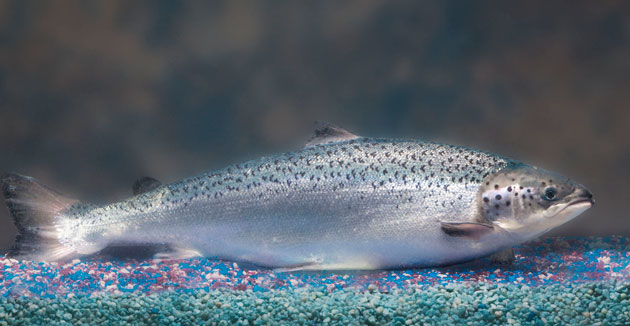 A number of US supermarket chains pledged on Wednesday not to sell genetically modified salmon, in a sign of growing public concern about engineered foods on the dinner table.

The US Food and Drug Administration (FDA) is in the final stages of deciding whether to allow GM salmon on to the market. If approved, AquaBounty Technology’s salmon would be the first genetically engineered animal to enter the food supply.

The company combined genes from two species of salmon with a pouter eel to produce a fish it says it can bring to market twice as fast as conventional salmon.

The GM salmon is the first in some 30 other species of genetically engineered fish under development, including tilapia. Researchers are also working to bring GM cows, chickens, and pigs to market.

However, those plans could be blocked by Wednesday’s commitment not to sell genetically engineered seafood from national grocery chains including Trader Joe’s, Aldi, and Whole Foods, as well as regional retailers.

Between them, the chains control about 2,000 outlets—a fraction of supermarkets across the country. But campaigners said they represent a growing segment of the population that is concerned about GM food, and willing to pay higher prices for healthier foods.

Eric Hoffman, a campaigner for Friends of the Earth, said in a statement: “Now it’s time for other food retailers, including Walmart, Costco, and Safeway, to follow suit and let their customers know they will not be selling unlabeled, poorly studied, genetically engineered seafood.”

Trudy Bialic from PCC Natural Markets, a chain of health food stores in Washington state, said: “We won’t sell genetically engineered fish because we don’t believe it is sustainable or healthy.”

There was no immediate response from AquaBounty, a struggling biotechnology firm which has spent nearly 20 years trying to bring the fish to market. The company has hit a number of financial crisis points over the past few years, relying on research grants and investors to stay in operation.

As the FDA review process enters its final stages, campaign groups are pushing retailers not to stock the product and tapping into growing awareness in America about GM foods.

Voters in California and other states have been pushing for labels on GM foods. Meanwhile, the Whole Foods chain announced earlier this month it would begin labeling foods containing GM corn and soybean by 2018.

Critics of GM salmon say the FDA has not conducted proper oversight of the fish, which are raised from eggs hatched in a facility in Prince Edward Island, Canada, and grown to maturity in tanks in a remote area of Panama, to ensure they can not escape into the wild.

They say there is insufficient data to back up AquaBounty’s claims its salmon can grow to maturity twice as fast as wild salmon. They also dispute the company’s claims that there is no increased risk to people with allergies.

Those concerns were amplified by the FDA’s preliminary finding that there was no need to label GM salmon.

Patty Lovera of the campaign group Food and Water Watch said it was not clear what effect the supermarkets’ move would have on the FDA’s decision, which is supposed to be focused on science.

But she said she hoped the growing public opposition to GM salmon—even before its approval—would push retailers to think twice about stocking the fish or more than 30 other varieties of GM seafood currently under development.

“It reinforces that there is no demand or no need for this product, so why does the FDA need to approve it?” she said. “If this many stores are willing to say ‘no’ ahead of time, I think that is a pretty strong signal that there is not a lot of demand.”