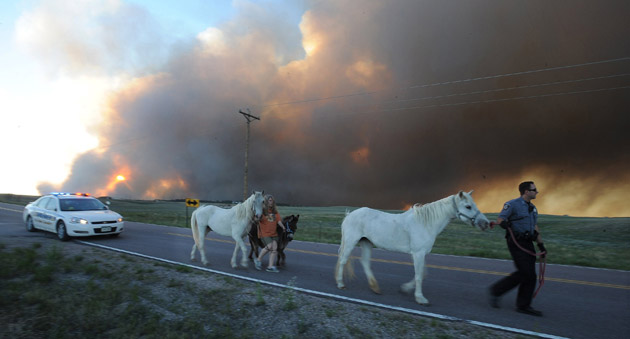 If you doubt that climate change is transforming the American landscape, go to Santa Fe, New Mexico. Sweltering temperatures there have broken records this summer, and a seemingly permanent orange haze of smoke hangs in the air from multiple wildfires.

Take a ride into the mountains and you’ll see one blackened ridge after another where burns in the past few years have ravaged the national forest. Again, this year, fires in New Mexico and neighboring states of Colorado and Arizona are destroying wilderness areas.

Fire danger is expected to remain abnormally high for the rest of the summer throughout much of the Intermountain West. But “abnormal” fire risks have become the new normal.

The tragic death of 19 firefighters in the Yarnell fire near Prescott, Arizona last Sunday shows just how dangerous these highly unpredictable wind-driven wildfires can be.

The last 10 years have seen more than 60 mega-fires over 100,000 acres in size in the West. When they get that big, firefighters often let them burn themselves out, over a period of weeks, or even months. These fires typically leave a scorched earth behind that researchers are beginning to fear may never come back as forest again.

Fires, of course, are a natural part of the forest lifecycle, clearing out old stands and making way for vigorous new growth out of the carbon-rich ashes. What is not natural is the frequency and destructiveness of the wildfires in the past decade—fires which move faster, burn hotter, and are proving harder to manage than ever before. These wildfires are not exactly natural, because scientists believe that some of the causes, at least, are human-created.

For one thing, the intensity of the recent fires, researchers say, is in part the result of a warming and drying trend which has been underway for over a decade, and which some climate scientists believe will become a permanent condition as anthropogenic climate change continues to increase.

Experts also blame the fire-suppression policy which has been in effect for much of the last century. In the past, frequent low-intensity lightning fires left behind a park-like patchwork of woodlands and open meadows. The Smokey the Bear philosophy of fire prevention interfered with this natural pattern. By always putting fires out rather than letting them burn freely, forests throughout the West have become thick and overgrown.

This well meaning but unwise policy decreased fire dangers in the short term, but increased them exponentially in the long run on 277 million acres of fire-prone public lands. When forests do burn now, instead of the gentler, meandering fires of the past, the unnaturally high fuel loads often make for rampaging fire-storms that typically destroy everything in their path.

In earlier low-grade wildfires, the trees that survived seeded recovery in the next generation. Nowadays, by contrast, the fierce heat of the mega-fires frequently incinerates all of the conifer seeds and seedlings and sterilizes the soil, making it all but impossible for the forest to regenerate.

In the Jemez mountains west of Santa Fe, the charred remnants of the 2011 Las Conchas blaze stretch for miles above the atomic city of Los Alamos. It was the biggest wildfire in New Mexico’s recorded history, until the following year, when lightning ignited the Whitewater Baldy fire in the southern part of state torching an area nearly half the size of Rhode Island.

Much of the Los Alamos burn resembles today a lunar landscapes—vast slopes of denuded gray soil where little vegetation has come back. Hillsides, once covered with ponderosa pine and squat, drought tolerant pinon and juniper trees, now grow only clumps of cheatgrass, an invasive species, and occasional bush-like shrub oaks. Biologist Craig Allen of the US Geological Survey, who has has spent years studying the Southwest forest ecosystem, says that areas like these won’t be forested again in our lifetime, and possibly they never will be. The reason that Allen and others are pessimistic is that climate change is hitting the Southwest harder and faster than most other areas in the US The region has warmed on average between 2 and 5 degrees during the past century, and this trend is expected to accelerate in the years ahead.

Add to this the danger from what scientists call a possible “mega-drought.” The Southwest has always been prone to extended dry periods, like the one which archeologists believe drove the Anasazi people of Chaco Canyon in the Four Corner’s area to the wetter Rio Grande Valley in the late 13th century. But a study published last year in the journal Nature Climate says that, by 2050, the region will be even drier than in previous mega-droughts. Moreover, hot summer temperatures in the southwest will literally suck the water our of leaves and needles killing trees in unprecedented numbers. “The majority of forests in the Southwest probably cannot survive in the temperatures that are projected,” one of the study’s co-authors, Park Williams, a bio-climatologist at the Los Alamos National Laboratory told Environment 360.

The stress that trees are already under becomes clear during a short drive north of Santa Fe. Whole hillsides near the town of Abiquiu, made famous by the haunting desert landscapes of Georgia O’Keefe, are now covered by the ashen skeletons of pinon pines. The trees, weakened by years of drought, were finally killed off in the late nineteen nineties by bark beetles, insects which have also devastated numerous stands of ponderosa and spruce at higher elevations.

Given these plagues of biblical proportions—fire, heat, drought and insects—the future for the Southwest’s forests looks dim. Whether they will survive at all may depend on what we do—or fail to do—in the next few years on the biggest plague of all: climate change.