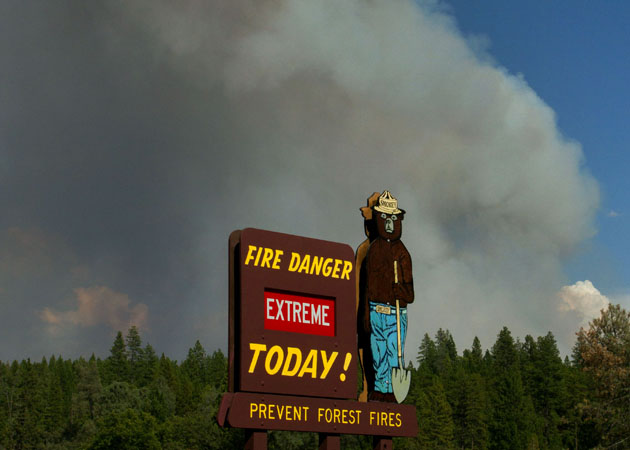 Smokey the Bear in Buck Meadows, Ca, with the Rim Fire burning behind him and his sign. On August 20, the fire was 10,000 acres.Marty Bicek/ZUMA

Northern California’s ferocious Rim Fire exploded to more than 106,000 acres Friday. According to the California Department of Forestry and Fire Protection, it is threatening roughly 4,500 structures, has entered Yosemite National Park, and is just 2 percent contained. These images will give you an idea of what it looks like:

Map of the fire from Friday, August 23. Updates can be found here. National Wildfire Coordinating Group 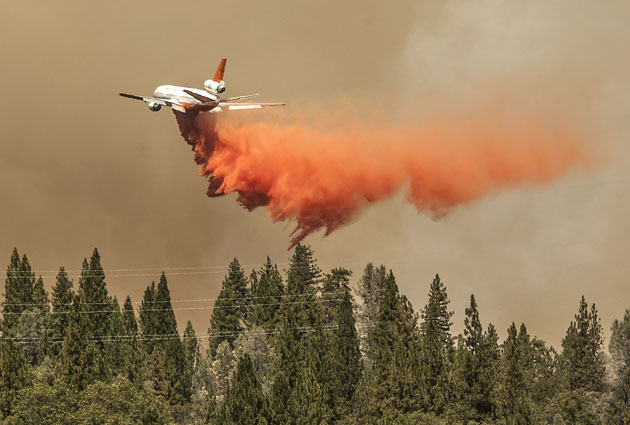 A DC 10 air tanker drops flame retardants just east of the town of Groveland. Hundreds of campers have been evacuated. Al Golub/ZUMA 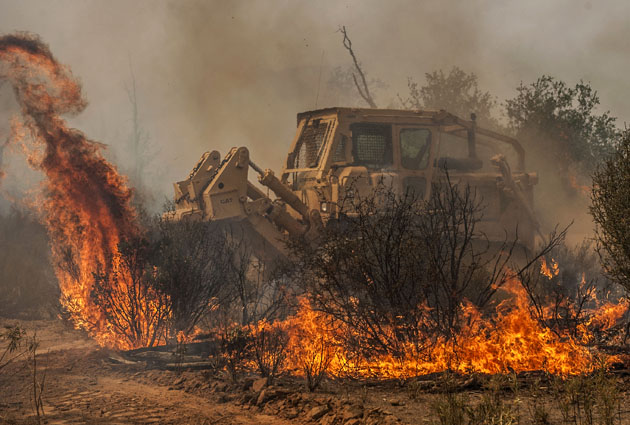 A firefighting bulldozer from Barstow, California, behind San Jose Family Camp, near Yosemite National Park. Al Golub/ZUMA
A crew from the 146th Airlift Wing of the California Air National Guard flies over the Rim Fire on Thursday afternoon. The best shot of the fire comes around the six-minute mark. 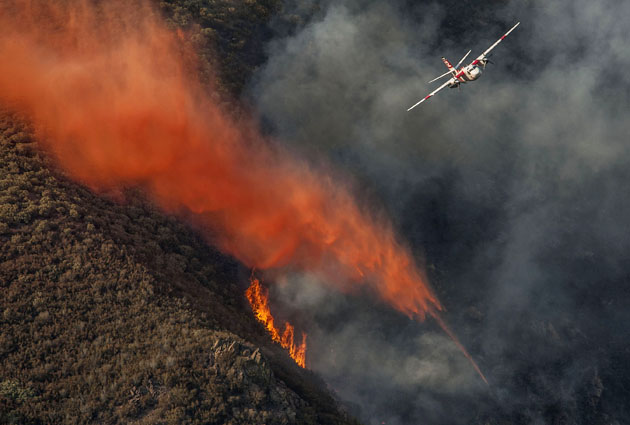 On the first day of the Rim Fire, firefighters in an aircraft worked until sunset to attempt to keep the fire from reaching the Tuolumne River. When this photo was taken the fire was only 200 acres, but the next morning it had made it to the bottom of the Tuolumne River. Al Golub/ZUMA 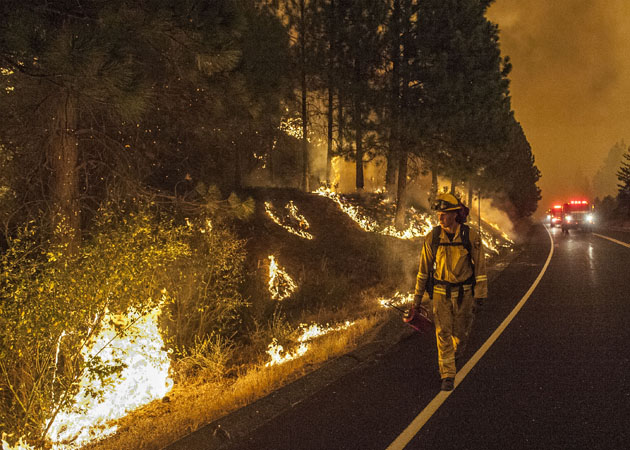 Cal Fire firefighters created a backfire to stop fire coming out of the Tuolumne River Canyon on Highway 120 Near Yosemite National Park. The Rim Fire jumped this road in several places.Al Golub/ZUMA 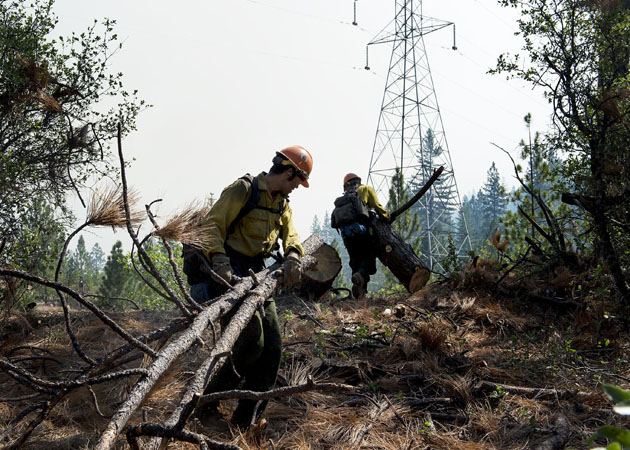 Members of the Horseshoe Meadow Hotshots—Chuck Ervin, left, and Ian White—prepare a fire break at the Rim Fire in the Stanislaus National Forest in California. Andy Alfaro/Modesto Bee/ZUMA 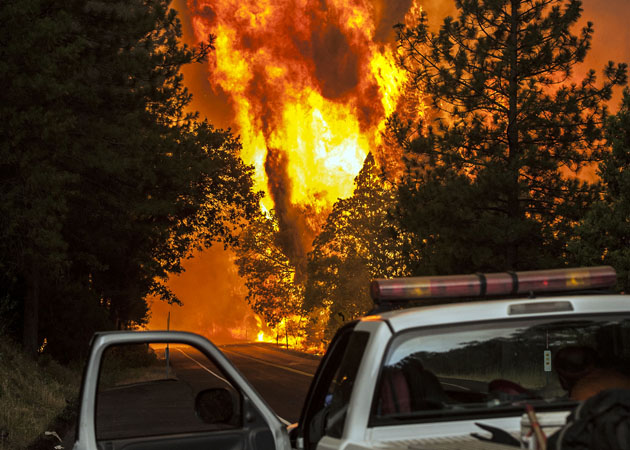 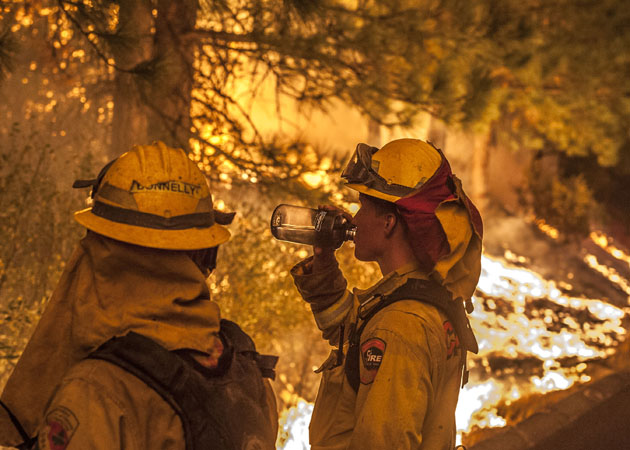 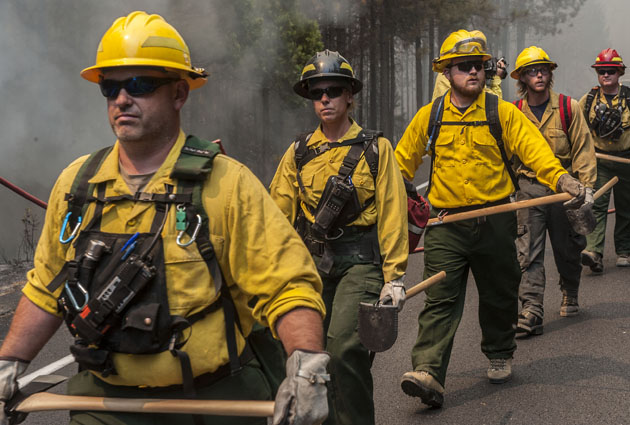 A US Forest Service crew hikes down Harden Flat Road to support structures during the fire. Al Golub/ZUMA