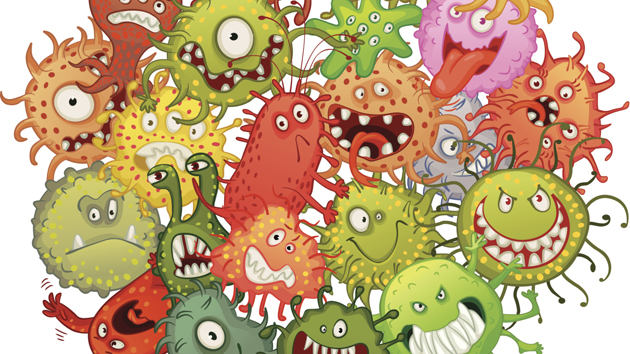 In 2001, Joshua Lederberg, a Nobel Prize-winning biologist, coined the term “microbiome,” naming the trillions of microorganisms that reside in and on our bodies. Today, if you type that word into Google, you’ll turn up thousands of hits linking gut bacteria to a laundry list of health problems, from food allergies to Ebola. Between 2007 and 2012, the number of journal articles published on the microbiome increased by nearly 250 percent. Our bodily inhabitants are quickly being cast as culprits or saviors for a diverse array of ailments.

The hype has kicked off a gold rush. Big food companies—including Nestle, PepsiCo, Monsanto, and General Mills—have funded gut bacteria studies, and some have even opened centers to develop foods that interact with the microbiome, such as probiotics. According to Transparency Market Research the global probiotics market is expected to reach an astonishing $45 billion by 2018.

At a 2012 Institute of Medicine forum called The Human Microbiome, Diet, and Health, Susan Crockett, former vice president for health and nutrition at General Mills, spoke about the “amazing things” the food industry could do to help people maintain a healthy microbiome, in the same way cereals helped Americans increase their fiber consumption. Baby formula, other industry reps suggested, could be enhanced to more closely match the bacterial profile of breast milk and weight-loss products could harness the microbiome to speed up metabolism.

Pharma companies, too, are reaping the benefits of the microbiome boom. Second Genome partnered with Janssen (the pharmaceutical arm of Johnson & Johnson) in 2013 to begin microbiome drug discovery for a variety of diseases, including ulcerative colitis. Seres Health, a “clinical-stage therapeutics company focused on discovering and developing drugs to treat diseases of the microbiome,” received more than $10 million in 2012 and 2013 from investors and announced in July that it has been granted patents to produce a pill that would allow patients the benefits of a fecal transplant without the gross factor.

Still, despite the optimism, some researchers caution that much of what we hear about microbiome science isn’t always, well, science. Dr. Lita Proctor heads the National Institutes of Health (NIH) Human Microbiome Project (HMP), an outgrowth of the Human Genome Project. “We are discovering a whole new ecosystem,” she says. But “I do have some fear—we all do in the field—that the hype and the potential overpromise, and the idea that somehow this is going to be different—there is a terrific fear that it will all backfire.”

“I do have some fear—we all do in the field—that the hype and the potential overpromise, and the idea that somehow this is going to be different—there is a terrific fear that it will all backfire.”

The goal of the first phase of the HMP was to identify the microbial makeup of a “healthy” microbiome. And, in a study published earlier this year, researchers made an important discovery—that there is no such thing. Even among people who were examined and found to be perfectly healthy, each person’s microbiome was unique.

“We were going about it all wrong,” Proctor explains. “It is not the makeup—these communities come together and they actually become bigger than the sum of their parts…It almost doesn’t matter who is present, it just matters what they are doing.”

Jonathan Eisen, a professor and biologist who studies the ecology of microbes at the University of California-Davis, shares Proctor’s concerns. In a series on his blog called “The Overselling the Microbiome Awards,” Eisen highlights what he considers to be skewed science. He has taken on transplants purported to treat multiple sclerosis, celiac disease, and Crohn’s disease. He casts doubt on a study claiming there’s a connection between a mother’s oral hygiene during pregnancy to the health of her newborn. He critiques the notion that you can use bacteria to battle breast cancer, prevent stroke, and cure Alzheimer’s.

Eisen says that one of the most common errors in studies is confusion between correlation and causation. “The microbiome has 400 million different variables that you can measure about it,” Eisen explains. “The different sites, the different species, the relative abundance of those species, the variation—if you have that many variables, I can guarantee statistically that some of them will be perfectly correlated with Crohn’s disease and have nothing to do with it.”

Eisen and Proctor worry that early hunches won’t pan out—and ultimately, the false leads could threaten both support and funding for the science in the future. Worse, the growing popularity of untested and unregulated therapies based in microbiome research—such as probiotics and DIY fecal transplants—could pose health threats to the public. One example: Remember those Jamie Lee Curtis commercials, where she blithely talked about how Activia yogurt kept her “regular”? The Federal Trade Commission launched an investigation and Dannon ponied up $21 million in a settlement for false statements.

Meanwhile, the American Gut Project, housed at the University of Colorado-Boulder, has raised more than $612,000 from people wanting to learn more about their own microbiomes. A $99 contribution gets you a sample kit, which you send back for sequencing in their lab. Your results are used in an open-data research project and you get the chance to see how your microbiome compares to other participants’. (Michael Pollan wrote about his experience participating in the project in the New York Times.) Another project called uBiome offers a similar service. While the genome sequencing company 23andMe came under fire from the US Food and Drug administration for offering customers insights into their personal health risks, neither the Human Gut Project nor uBiome have received such a warning—likely because it doesn’t make the same diagnostic claims.

Given the concerns of Proctor and Eisen, that might be a smart approach. “You haven’t seen any specific therapy or product yet, and in that regard it is still some years away,” Proctor says. “There is a certain pace at which things can happen and it is such a brand new area that there is a lot yet to be understood.”