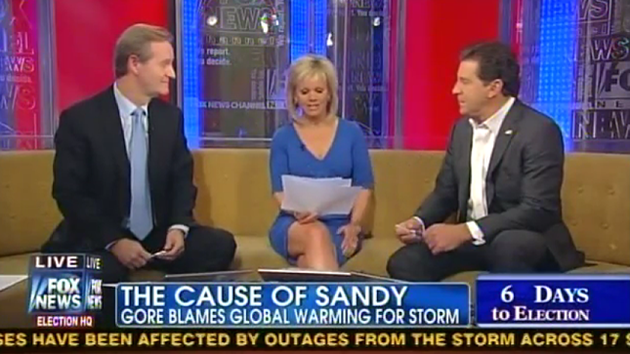 The day after Superstorm Sandy devastated much of the East Coast, Al Gore issued a statement linking the storm to climate change. That’s when Fox News went on the attack.

“These global warming claims have been debunked time and time again,” declared Eric Bolling, a former crude oil trader who is now one of the network’s most inflammatory hosts. “Look, it’s weather. Weather changes. Things happen. It has nothing to do with global warming.”

Earlier this month, a London-based organization called CDP released hundreds of questionnaires it collected from corporations—including 21st Century Fox—that had agreed to disclose their greenhouse gas emissions and outline the risks global warming could pose to their business. In its submission to CDP, 21st Century Fox noted that climate change “may increase the frequency and power of tropical cyclones” and that the resulting storms could hurt its bottom line. And the company cited Sandy as a prime example:

In the current reporting year, 21st Century Fox was affected by Superstorm Sandy through filming interruptions, travel delays, facility and equipment damange [sic] and box office closings in the Northeast U.S. The storm showed that 21st Century Fox can be negatively impacted by climate-related weather impacts. Severe weather and climate change also pose physical risks to 21st Century Fox’s supply chain, such as the ability and timeliness with which products and services can be delivered to and from the company.

An entertainment colossus with businesses that include everything from right-wing cable news to blockbuster movies to satellite television, 21st Century Fox is one of two media companies led by Rupert Murdoch. The other is News Corp, which controls newspapers worldwide and which split from 21st Century Fox last year. In its own response to CDP, News Corp also cited Sandy, similarly warning that climate change could disrupt its business by potentially increasing the “frequency and power of tropical cyclones.”

Indeed, Sandy cost Murdoch’s media empire more than $2 million in “damage and filming delays,” according to the documents.

The storm caused significant damage and shutdowns at News Corp plants, and it reportedly disrupted delivery of the Wall Street Journal. (According to one of the documents, “weather-related missed deliveries” of the Journal have been increasing over the last three years.) Murdoch’s entertainment business also took a hit. For example, 21st Century Fox reported that Sandy “reduced sales in a key market” and cited estimates that the storm was largely responsible for a 12 to 25 percent drop in box office sales. And flooding in Brooklyn damaged the set of the The Americans—a TV drama produced by Fox Television Studios—forcing the company to postpone filming. (A Fox spokesperson said the delay lasted “less than two weeks” while the necessary repairs were made.)

Of course, News Corp and Fox were far from the only businesses impacted by Sandy. Delta Airlines, for instance, told CDP that it lost $75 million in revenue. Abercrombie & Fitch lost more than $10 million in sales. And utility giant Con Edison shelled out more than $500 million to fix damage caused by the storm.

But the Murdoch companies’ statements linking Sandy’s devastation to climate change represent a striking contrast to the global warming commentary that often appears in their news outlets. Fox News, in particular, is a hotbed of climate denial; a recent Union of Concerned Scientists study found that fully 72 percent of the network’s climate segments contained “misleading” statements. A Fox editor once directed reporters to cast doubt on temperature data showing that the Earth has warmed.

On the newspaper side, the Wall Street Journal regularly publishes editorials and opinion pieces skeptical of climate science. And according to a report last year from the Australian Center for Independent Journalism, News Corp’s Australian papers are a “major reason” why that country’s media is “a world leader in the promotion of scepticism.” 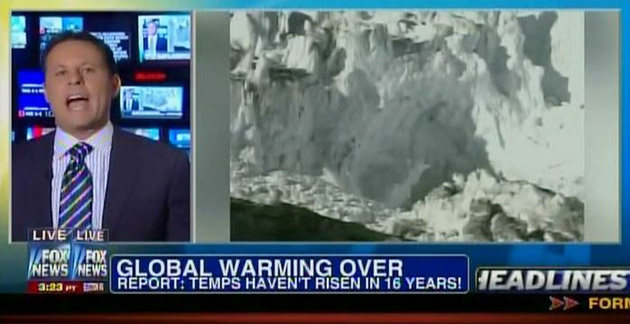 This tension is nothing new for Murdoch’s companies. In 2011, Fox News hosts were attacking climate scientists even as Murdoch was announcing that News Corp had become carbon neutral. Media Matters (my former employer) wrote at the time that the “contrast between what News Corp’s chairman says and what its employees actually do is a stark illustration of the company’s attempt to play both sides of the climate issue.”

The companies’ concerns about possible climate disruptions go far beyond Sandy. “To the extent that any increase in frequency of extreme events can be correlated to a trend like climate change,” writes 21st Century Fox in its CDP submission, “there is a continued need to prepare for business disruptions.” It warns that “extended and severe droughts” could worsen wildfires in Southern California, where much of its entertainment business is based. And it cites recent wildfires in Russia and floods in Australia that “disrupted film and TV productions and caused property damage.”

News Corp has similar concerns about increasing wildfire risk, writing that its Australian businesses operate “in regions with bushfire risks, and 2013 saw the extreme fire season start earlier than previous years.” And the company points to another—less obvious—threat from climate change. As droughts become more frequent and more severe, writes News Corp, there could be unpredictable consequences for the forestry industry that produces the paper its newspapers are printed on. But don’t worry: The Wall Street Journal’s climate-change editorials are available online.