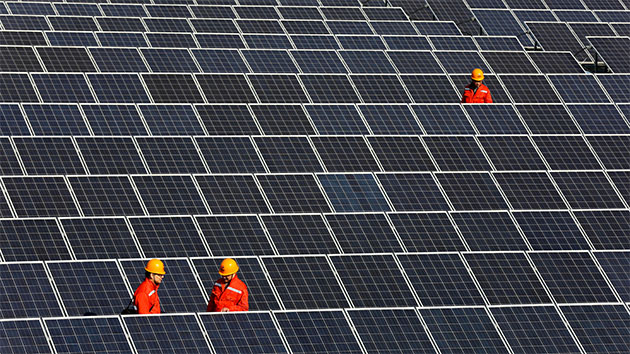 Workers check the solar panels on the roof of a textile factory in Tongxiang, in China's Zhejiang province. China leads the world in clean energy investment.Shen Zc/Featurechina/Ropi/ZUMA 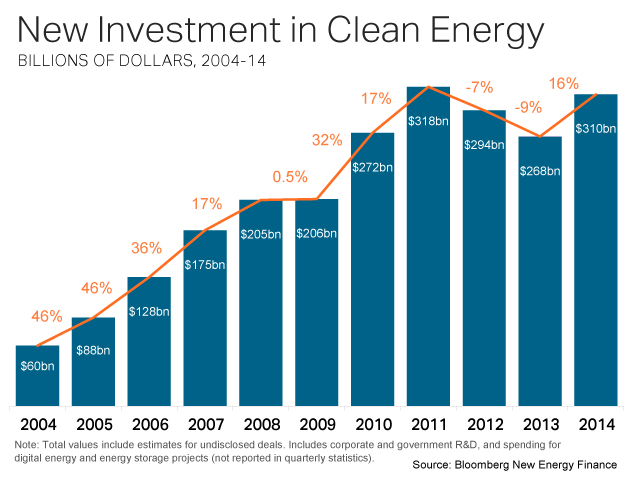 BNEF produces quarterly reports that track how much money governments and the private sector are pouring into wind, solar, biofuels and other green energy projects. In 2014, the United States enjoyed its biggest investments since 2012, but it was China that once again drove the numbers. China’s clean energy spending shot up 32 percent to a record $89.5 billion, cementing its place as the world’s top market for green investment. (You can get a sense of just how impressive Chinese investment is by peaking inside the the world’s biggest solar manufacturing factory, which is run by Chinese company Yingli.)

Solar is getting the lion’s share of investment around the world, according to the figures. Almost half the money spent on clean energy this year—just shy of $150 billion—was in the solar industry. Wind investment also reached record levels—$19.4 billion globally—thanks in part to offshore projects in Europe.

There was one darker patch in the numbers: Australia, where the government is trying to slash the country’s Renewable Energy Target, a policy that creates mandates for the amount of clean energy in the electricity mix. Bucking the global trend, investments there fell by 35 percent.