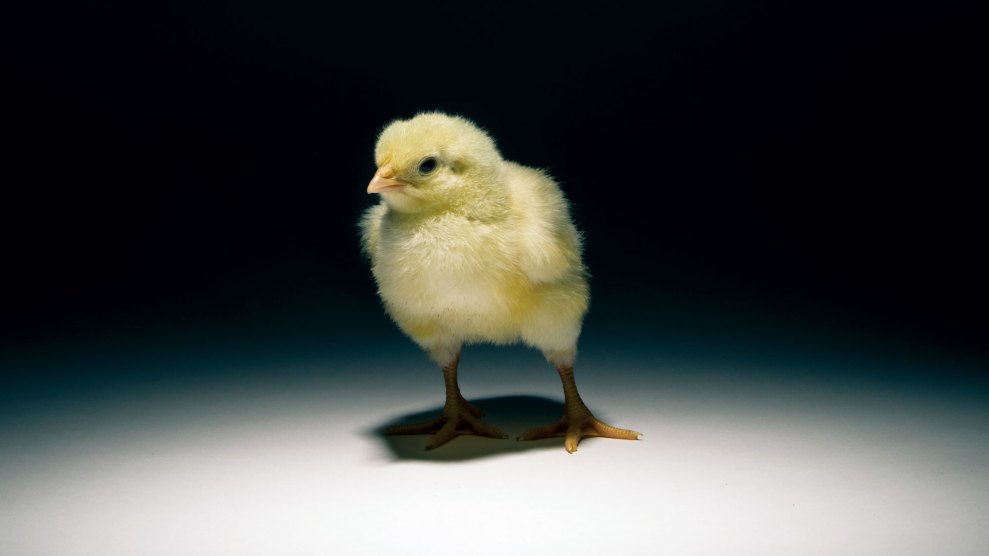 “Do the birds get what they want?” Perdue executive Bruce Stewart-Brown asked. We were surrounded by 20,000 squawking chickens in a vast indoor facility in Maryland. I was in the midst of reporting a Mother Jones deep-dive on the meat industry’s over-use of antibiotics crucial to human medicine, and how Perdue had moved decisively away from that practice.

At the time, Stewart-Brown’s rhetorical question sounded a bit silly, coming from a company that slaughters and packs 650 million chickens per year, making it the nation’s fourth-largest poultry company. Yet as I found during my reporting, Perdue isn’t just any chicken producer. Unlike all of the other industry giants, the company had quietly begun to move away from antibiotics around a decade ago.

Now Perdue has announced an animal welfare program that seems as ambitious as its move away from drugs. The company has committed itself to following the Farm Animal Welfare Council’s “five freedoms” for farm livestock, the most notable of which are the “freedom from discomfort,” “freedom to express (most) normal behavior by providing sufficient space, proper facilities and company of the animal’s own kind,” and “freedom from fear and distress.”

“Our goal is to double the rate of play/activity by our chickens in the next three years,” the company states in a newly released “Commitment to Animal Welfare.” Moreover, acknowledging that modern chickens have been bred to grow rapidly, causing leg injuries and making it very difficult to walk late in their lives, Perdue says it’s considering moving to “breeds of birds that grow slower.”

“Our goal is to double the rate of play/activity by our chickens in the next three years.”

In concrete terms, the facilities that house Perdue’s birds will eventually be outfitted with windows, giving them access to sunlight, and be less densely stocked, giving the birds more room. The company so far hasn’t released details on how much more space birds will get (the current industry standard is eight-tenths of a square foot per bird). As for the windows, the company plans to install windows in 200 of the 6,000 existing poultry houses that supply it. They’ll be used as a kind of controlled experiment, to “compare bird health and activity to enclosed housing.” If the windows prove effective in increasing activity among the flock, “we will establish annual targets for retrofitting houses with windows,” Perdue states. All new chicken houses will be required to have windows.

New York Times reporter Stephanie Strom got a look at one of the the window-equipped chicken houses, run by an operation that contracts for Perdue:

Sunlight floods the floor at one end of the chicken house here at Ash-O-Ley Acres, and spry little Cornish game hens flap their wings and chase one another. At the other end of the barn, where the windows are covered as part of a compare-and-contrast demonstration, the flock is largely somnolent and slow to move.

In addition to responding to long-simmering animal-welfare complaints about factory-scale farming, Perdue is also openly discussing another highly controversial topic: Big Poultry’s reliance on nominally independent farmers to grow their chickens, under contract terms that largely favor giant processing companies like Perdue. (See my piece on a particularly presumptuous contract term that Perdue quickly nixed when I exposed it.)

Normally, when a big chicken company decides it wants to change something about the enormous barns where its birds are grown, it merely changes the terms of its contracts, forcing farmers to upgrade their facilities or risk losing their market. In this case, Perdue will pick up the cost of retro-fitting the 200 pilot houses, a company spokeswoman told me. As the windows program expands, the company says it will continue to pick up at least part of the cost. “We’ll determine how it will get paid for,” the spokeswoman said, “whether we will pay for it directly or compensate the grower through a premium for upgraded housing or…a cost-share or financing approach.”

And the company’s “Commitment to Animal Welfare” document even includes a pledge to “do a better job listening to farmers and communicating with them.” Rather than set pay solely based on factors like efficiency and output, contracts will include incentives for “care of the birds and welfare performance,” the document states. A Perdue spokeswoman added that the company is consulting with farmers to figure out the best way to compensate them for making the birds’ lives better.

Perdue is consulting with farmers to figure out the best way to compensate them for making the birds’ lives better.

Of course, as with all voluntary corporate initiatives, Perdue sets the terms of the program and controls the information that emerges from it. As Maryn McKenna notes on the National Geographic website, “For most of its initiatives, the company has not disclosed a timeline.” But as I discovered in my reporting, Perdue’s anti-antibiotics effort proved to be the real deal, and it has pulled the bulk of the poultry industry in the same direction. Perhaps its animal-welfare reforms will do the same.

Leah Garces, executive director of Compassion in World Farming, which released a video in 2014 exposing harsh welfare conditions on a Perdue-contracted farm, thinks they just might. “Just as Perdue led the way on antibiotics, they are laying out the inevitable direction of the market,” she said. “I’m confident every poultry company today is thinking hard about steps they also need to take to improve the lives of chickens in order to keep up.”