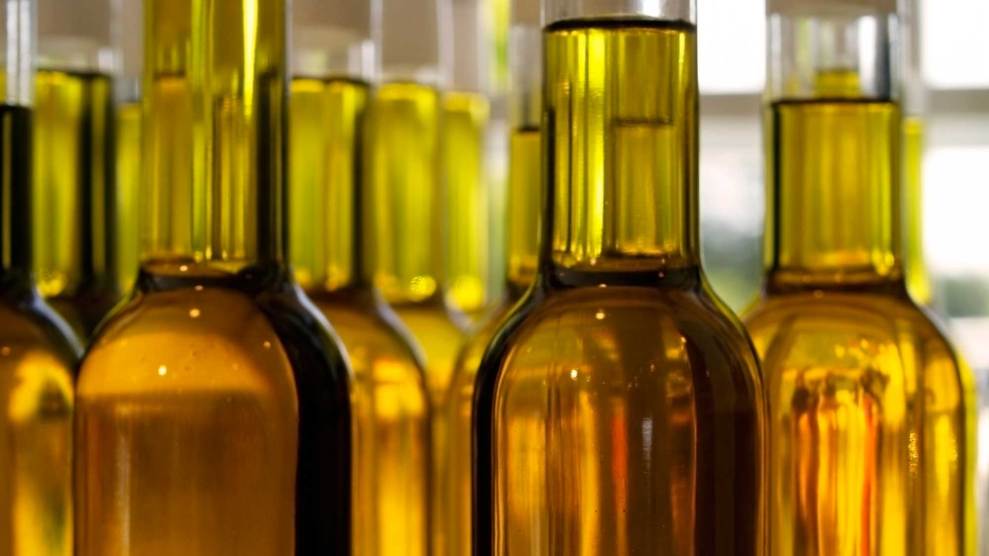 Walk into your kitchen and pick up your bottle of olive oil. You know, that health-promoting nectar of Mediterranean age-defying prowess, lubricant of pasta, the only thing that makes your kale salad palatable? According to government reports, that stuff might not be what you think it is. *

“Most oils sold in the United States are fake.”

That’s because unless you’ve plucked your own olives from your own backyard grove and crushed the fruit and pressed the oil yourself, that slippery substance might have been cut, adulterated, and deceptively labeled before it reached the bottle in your hands. “It’s amazing how many people there are in America who don’t even know what the real thing tastes like,” laments Larry Olmsted, author of the new book Real Food, Fake Food: Why You Don’t Know What You’re Eating and What You Can Do About It and our guest on this week’s episode of Bite. “Most oils sold in the United States are fake,” he writes.

Food fraud—or the act of deceiving consumers about a food or ingredient for the sake of profit—affects as much as 10 percent of the global food supply. Of all the instances of food fraud in the United States, according to a scholarly database tracking this very thing, olive oil leads the way, making up 16 percent of cases (followed by milk, honey, saffron, and orange juice).  This type of deception has been around for basically as long as we’ve packaged food: Researchers have excavated mislabeled Roman jars containing counterfeit samples of oil.

One of the reasons oil is so often faked is that it’s bottled before you use it, and it travels far before it lands on grocery store shelves. “If it’s something you can’t look at and easily recognize, it’s more likely to be defrauded,” Olmsted explains. The United States imports more olive oil than any other country, and yet regulations on the labeling of said oil are voluntary. House and Senate subcommittees have urged the Food and Drug Administration to take a harder look at the issue; in a draft report accompanying the Agriculture Appropriations Bill for fiscal year 2017, the House committee stated it was “concerned with reports that consistently describe the prevalence of adulterated and fraudulently labeled olive oil imported into the US.”**

Since extra-virgin olive oil is the most valuable oil category in the United States, shady producers and dealers have plenty of incentive to mess with it in hopes of reaping more profit. They defraud consumers in three main ways: by (1) diluting real extra-virgin olive oil with less expensive oils, like soybean or sunflower oil; (2) diluting high-quality olive oil with low-quality olive oil; or (3) making low-quality extra-virgin olive oil, “typically incorporating older—and often rancid—stocks of oil held over from bumper crops of previous seasons,” writes Olmsted. When the University of California–Davis researchers tested olive oil bought off the shelf in 2010, they found that 69 percent of imported “extra-virgin” samples failed to meet international standards, based primarily on sensory and chemical testing.†

Aside from imparting rotten flavors and ripping people off, this fraud deprives people of some of the health benefits that may have prompted them to buy the oil in the first place: Fresh extra-virgin olive oil is thought to be higher in the polyphenols, which may reduce the risk of heart disease. It’s also low in saturated fat and contains antioxidants.†† “Bad oil isn’t just a deception, it’s a crime against public health,” one Italian olive oil trade association president told Olmsted.

So what’s the best way to avoid getting punked? Olmsted offers up some handy advice:

Don’t trust most labels: Be wary of words like “pure,” “natural,” “virgin olive oil,” “premium,” “light,” “made in Italy,” and just “olive oil.” They suggest a low-quality substance, and one potentially made from refining the remainders of the skin and pits of olives rather than the olives themselves. “First cold pressed,” while sounding legit, doesn’t actually mean much these days since extra-virgin olive oil is typically spun out of olives with centrifuges rather than pressed. Even the term “extra-virgin olive oil” gets slapped on bottles of low-grade oil illegally—and enforcement is very sparse—so terminology isn’t necessarily your safeguard.

Stamp of approval: Here in the United States, look for the seal denoting approval by the California Olive Oil Council: “COOC Certified Extra Virgin.” (And here’s its list of 2015 certified oils). Olmsted also recommends Extra Virgin Alliance (EVA) and UNAPROL, the respected Italian olive growers’ association. Concern over olive oil fraud in the United States sparked the Department of Agriculture to add olive oil to its voluntary quality monitoring program in 2012, but so far only two companies participate. (Look for the label “USDA Quality Monitored.”)

Judge the country of origin: “If you have to purchase blindly with no other clue besides where it was made, choose Chile or Australia,” writes Olmsted. The two countries received the highest marks from the US International Trade Commission’s report on average quality of extra-virgin olive oil.

Buy in season and in the dark: Look for bottles with dates listed on them, and buy the oil that was bottled most recently. The end of the year is the worst time to buy oils from the Northern Hemisphere, because they will likely be leftovers from last season; likewise, avoid oils from Chile, Australia, and South Africa during our spring and summer. Olive oil’s quality degrades in the light, so don’t purchase clear bottles that have been sitting by a window; opt for dark glass bottles or cans instead.

Update: After the publication of this story, the North American Olive Oil Association contacted us to say that it has used International Olive Council labs to test hundreds of olive oil samples collected from supermarkets annually, and its results consistently show that more than 98 percent of olive oil in US retail outlets is authentic.

*Correction: We have corrected the headline and other parts of the article to more accurately reflect the likelihood of olive oil fraud.

**Correction: We have corrected this sentence to reflect the fact that the most recent version of the 2017 Agriculture Appropriations Bill does not mention olive oil adulteration or labeling.

†Clarification: We added further detail about the nature of the testing done by UC-Davis researchers.

††Correction: A previous version of his article mischaracterized the health attributes associated with extra-virgin olive oil.