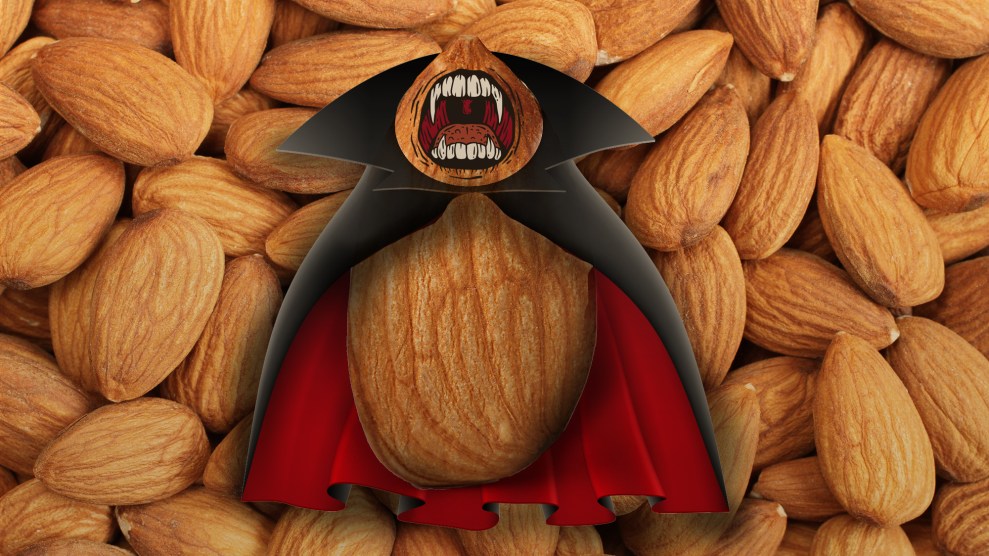 Two new data points on the ongoing California drought and its impact on the state’s booming and thirsty farms:

• In California’s agriculture-rich, water-poor San Joaquin Valley, H2O from the state’s big irrigation projects has been especially scarce in recent years. As a result, farmers have had to rely heavily on water pumped from underground aquifers—and they’ve extracted so much of it that since 2013, land has been sinking in large swaths of the region, fouling up canals, bridges, roads, and other vital infrastructure and racking up billions of dollars in damage.

This year? Here’s an eye-popping report from the Sacramento Bee:

[N]ew wells are going in faster and deeper than ever. Farmers dug about 2,500 wells in the San Joaquin Valley last year alone, the highest number on record. That was five times the annual average for the previous 30 years, according to a Sacramento Bee analysis of state and local data

Back in 2014, Gov. Jerry Brown reversed a long tradition of Wild West groundwater management in California by signing a new law requiring the state’s most stressed watersheds to stop drawing down aquifers faster than they’re naturally replenished. The catch: The guidelines don’t kick in until 2040. In the meantime, San Joaquin Valley growers are embroiled in a “kind of groundwater arms race,” the Bee reports.

Aquifers don’t respect property lines, and in many cases, farmers with older, shallower wells are afraid of losing water to neighbors who are digging deeper wells and lowering the groundwater table. So they invest hundreds of thousands of dollars to drill new wells of their own. All told, farmers are expected to spend $303 million this year alone to pump groundwater, according to UC Davis researchers.

• In a new study presented last Wednesday at the Geological Society of America, Eastern Kentucky University’s Kelly Watson drills down into one of the destinations of all that water extraction: the state’s massive and growing base of almond groves.

Using satellite imagery, Watson looked at land conversions in California’s Central Valley (made up of two valleys, the San Joaquin and the Sacramento) between 2007 and 2014. She found that land devoted to the delicious (but water-intensive) nut had expanded 14 percent over that period—not surprising, given the ongoing almond boom.

The interesting finding, though, is that a huge chunk of the new almond territory was converted from fallow, completely un-irrigated land, including grasslands, wetlands, and forests. As for the rest, some of it switched over from less water-intensive crops like corn, cotton, wheat, and tomatoes; and some had been used for even thirstier crops like sugar beets, alfalfa, and clover. The bottom line: Watson calculates the net impact of the expansion was a 27 percent increase in annual irrigation needs for the converted land, putting massive new pressure on those struggling aquifers.

Over on Forbes, science writer Mallory Pickett notes that the study has yet to be published—it’s currently in peer review—and that “aerial images can only paint broad brush pictures” of the situation on the ground. But it’s not a pretty picture.