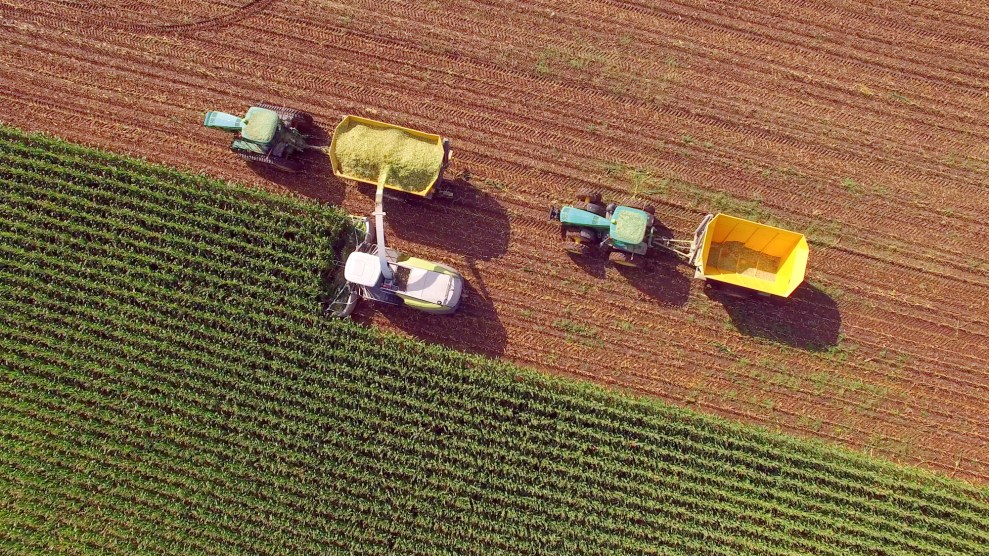 Eighty percent of US corn, by far our biggest crop, is genetically modified. What has that gained us? <a href="http://www.istockphoto.com/photo/farm-machines-harvesting-corn-for-feed-or-ethanol-gm604352678-103773711?st=_p_field%20of%20corn">James Brey</a>/iStock

Genetically modified seeds emerged in the mid-1990s and have since conquered million of acres of US farmland. Today, upward of 80 percent of corn, soybean, and cotton acreage is planted with crops engineered to withstand herbicides or insects, as have large portions of our sugar beet and alfalfa crops. Beyond the massive marketing triumph and financial success of companies like Monsanto and Syngenta—which sell both the seeds and the related herbicides—what has the industry achieved in terms of public benefits?

Have they helped farmers churn out more food per acre and reduce pesticides, as the industry has long claimed? Or, as some of their more extreme critics suggest, are they subtly poisoning the food supply?

Europe essentially rejected GMOs—and paid no price for it.

In Sunday’s New York Times, investigative journalist Danny Hakim has an elegant, in-depth piece digging beneath considerable industry hype to examine that question. His conclusion: While “fears that they are unsafe to eat” are  “largely unsubstantiated,” “genetic modification in the United States and Canada has not accelerated increases in crop yields or led to an overall reduction in the use of chemical pesticides.”

To reach that conclusion, Hakim compared US yields of crops like corn and sugar beets with the same crops grown in Europe (charts here), where GMOs aren’t widely used. He also compared pesticide-use rates. The result: “The United States and Canada have gained no discernible advantage in yields—food per acre—when measured against Western Europe, a region with comparably modernized agricultural producers like France and Germany.” The result, he notes, is consistent with a recent National Academy of Sciences report that found that “there was little evidence that the introduction of genetically modified crops in the United States had led to yield gains beyond those seen in conventional crops.”

Shorter: Europe essentially rejected GMOs and paid no price for it.

For pesticides, the performance has been mixed, but not exactly an affirmation of GMO crops’ 20-year run.

One measure, contained in data from the United States Geological Survey, shows the stark difference in the use of pesticides. Since genetically modified crops were introduced in the United States two decades ago for crops like corn, cotton and soybeans, the use of toxins that kill insects and fungi has fallen by a third, but the spraying of herbicides, which are used in much higher volumes, has risen by 21 percent.By contrast, in France, use of insecticides and fungicides has fallen by a far greater percentage—65 percent—and herbicide use has decreased as well, by 36 percent.

The article has predictably generated a storm of criticism from industry enthusiasts. Hakim answered some of them in a tweetstorm Sunday morning (start here). I’ll have more to say about it later this week. In the meantime, as someone who has been teasing out this story for a decade, it’s refreshing to see the topic covered with such precision and clarity in the paper of record.