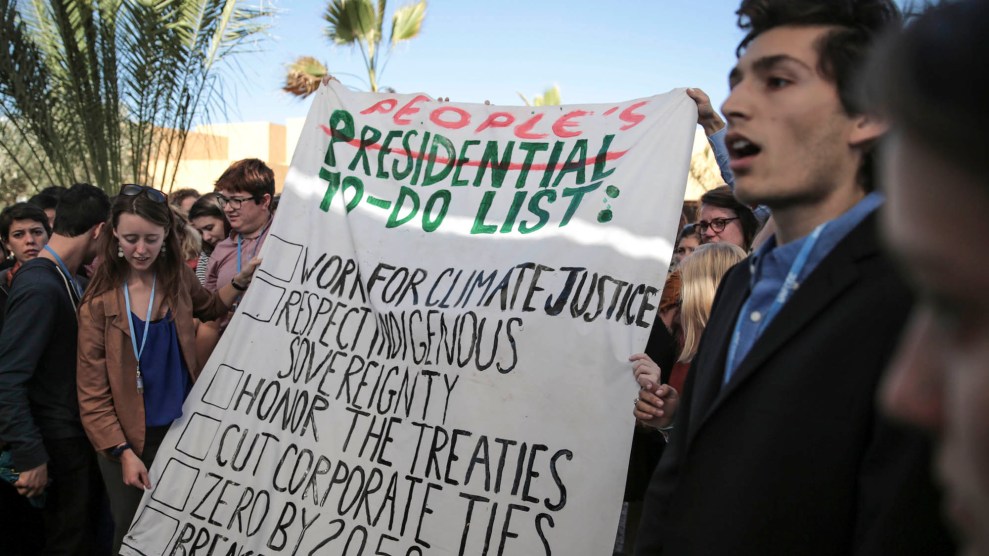 
This story was originally published by the Huffington Post and is reproduced here as part of the Climate Desk collaboration.

MARRAKECH, Morocco?Attendees at the climate conference here are grappling with a reality few expected: America’s next president will almost certainly be openly hostile to efforts to address the biggest environmental threat of our day.

Representatives of more than 200 countries are currently gathered in Morocco for the 22nd Conference of the Parties, where they are hashing out the details of the landmark Paris Agreement to curb greenhouse gas emissions and avoid the worst effects linked to global warming.

Officials from environmental and scientific groups gathered at the United Nations climate change conference tried not to dwell on the prospect of a doomsday scenario, but were clear that a climate change-denying Donald Trump would not be in the best interest of America, or the world. But they tried to remain positive.

“The United States, if it follows through on its new president’s rash words about withdrawing from the international climate regime, will become a pariah state in global efforts for climate action.”

“It’s clear that Donald Trump is about to be one of the most powerful people in the world, but even he does not have the power to amend and change the laws of physics, to stop the impacts of climate change,” said Alden Meyer, director of strategy and policy at the Union for Concerned Scientists, a science advocacy group based in the US, at a press conference held shortly after the election was called early Wednesday. “He has to acknowledge the reality of climate change, he has a responsibility as president-elect now.”

The US presidential election results came as a surprise to many who on Tuesday thought Hillary Clinton would be elected and plans to continue the Obama administration’s work on climate change would make press conferences a relative non-event. But Trump’s name is on everyone’s lips as many wonder where America will stand in future negotiations.

Some groups have not been as diplomatic.

“The election of Trump is a disaster for our continent,” Geoffrey Kamese, a senior program officer for the group Friends of the Earth Africa, said in a statement. “The United States, if it follows through on its new president’s rash words about withdrawing from the international climate regime, will become a pariah state in global efforts for climate action.”

The US delegation had previously planned to cut greenhouse gas emissions from the amount released in 2005, by between 26 and 28 percent by 2025. The prospect of a presidency helmed by Trump, who has said that climate change is a hoax perpetrated by the Chinese, throws that into question. He has threatened to ignore those pledges and leave the Paris deal, end all funding on the issue, appoint climate deniers to lead major government agencies and roll back President Barack Obama’s sweeping environmental legacy. His election won’t help the fight against climate change.

The previous climate pact, the Kyoto Protocol, failed to meaningfully address climate change because the United States backed out, a move that set back climate change progress two decades.

But climate advocates tried to spin the fallout from Trump’s election positively, arguing that other nations aren’t likely to wait for the US?the world’s second largest polluter?to take action.

“We have signed a binding agreement along with scores of other countries and we will demand that agreement be honored.”

“Other major countries in this process will continue to go ahead with the climate commitments that they have made under Paris, not because they’re trying to please the United States, but because it’s in their own self interest to protect their people from the impacts of climate change,” Meyer said. However, he continued to note inaction on behalf of America could certainly impact other international negotiations.

Katherine Egland, chairman of environmental and climate justice for the NAACP, stressed that for the Paris Agreement to succeed, “no one country can be perceived as not doing its fair share.”

“We remain a nation of honor?our word is our bond,” she said. “We have signed a binding agreement along with scores of other countries and we will demand that agreement be honored.”

Mariana Panuncio-Feldman, senior director of international climate cooperation for the World Wildlife Fund, said despite the outcome, “the momentum for climate action has never been greater.”