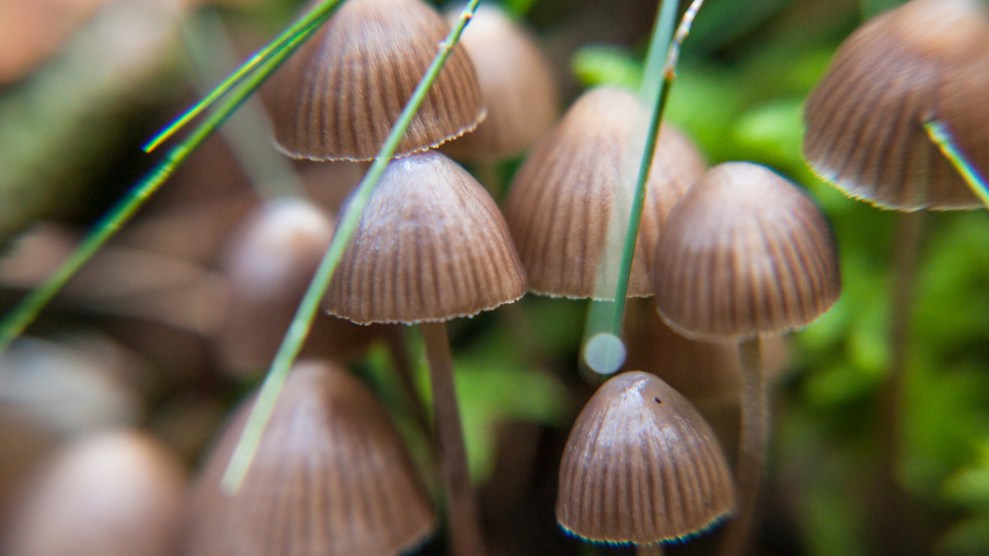 Cancer doesn’t just ravage bodies. People stricken with life-threatening cancers are also prone to depression and anxiety, which can in turn make them more vulnerable to succumbing to the disease. So any treatment that can ease the psychological toll of cancer not only reduces suffering; it can also prolong lives. Two separate research teams—one at New York University, one at Johns Hopkins—published studies Thursday identifying such a remedy: a single magic-mushroom trip, experienced under controlled conditions with a therapist.

Even though these results are promising, they likely won’t lead to a treatment your doctor can prescribe anytime soon. In a June episode of Bite podcast, author Michael Pollan gave us a brilliant rundown on the history and science of hallucinogenic compounds like LSD and magic mushrooms (which contain psilocybin). Pollan explains how their ability to generate altered mental states has shrouded them in taboo—and made us turn away from their potential as medicines. As the NYU team notes, hallucinogens—including psilocybin—have shown promise for treating cancer stress for decades. But research on them halted in the mid-1970s, after the passage of Controlled Substance Act, which deemed LSD and magic mushrooms illegal substances.

As Pollan explained in a 2015 New Yorker piece, the gradual easing of the federal government’s “war on drugs” has opened space for a small renaissance of research. These two new studies are some of the earliest fruit of that effort. Both the NYU and the Johns Hopkins study focused on a group of cancer patients suffering from anxiety and depression, and used the “double-blind” method, meaning neither the subjects nor their therapists knew who got the real drug and who got the placebo.

A single dose of psilocybin “produced immediate, substantial, and sustained improvements in anxiety and depression” in cancer patients.

The NYU team divided 29 patients into two groups, half of whom got a “single moderate dose” of psilocybin, the compound that brings the magic to psychedelic mushrooms; the other half got a dose of niacin, a common B vitamin. After seven weeks, the groups crossed over—the psilocybin-dosed patients got niacin, and vice-versa. Both also received psychotherapy.

The results were stark: A single dose of psilocybin “produced immediate, substantial, and sustained improvements in anxiety and depression and led to decreases in cancer-related demoralization and hopelessness, improved spiritual well-being, and increased quality of life.” After about six months, these benefits persisted for most of the participants.

The Johns Hopkins study also involved two groups of cancer patients. Instead of niacin, half of them initially got a tiny, “placebo-like” dose of psilocybin, while the other half got doses similar to the ones in the NYU study. After five weeks, they crossed over. “Drug sessions were conducted in an aesthetic living-room-like environment with two monitors present,” the researchers write. They continue:

And the results were similar to those of the NYU study: After getting a dose of magic mushrooms, patients quickly showed “large decreases” in depression and anxiety, “along with increases in quality of life, life meaning, and optimism, and decreases in death anxiety,” effects that persisted for a majority of the patients six months later.

The decidedly positive results are a big deal, because as the NYU team notes in its study, cancer patients are often treated with conventional pharmaceuticals to treat depression and anxiety, but these drugs don’t take effect very rapidly or last very long, and carry “significant side effects” that make them unpleasant to use. By contrast, a single dose of psilocybin usually produced what might be described in layman’s terms as a “good trip”—what the authors call a “psilocybin-induced mystical experience.” As for unpleasant side effects, the NYU researchers found none. Some of the Johns Hopkins patients did experience elements of what might be called bad trips after their dose—15 percent endured nausea or vomiting, for example, and 32 percent reported some form of “psychological discomfort”—but none of these adverse episodes were deemed serious.

And there were positive side effects. In a press release, Anthony Bossis, one of the NYU researchers, noted study participants reported “going out more, greater energy, getting along better with family members, and doing well at work,” as well as “unusual peacefulness and increased feelings of altruism.” Bossis stressed, though, that no one, including cancer patients, should take psilocybin on their own or “without supervision by a physician and a trained counselor.”

Of course, bringing psilocybin to market as an approved pharmaceutical will likely require years of research and regulatory maneuvering. As Pollan argued on Bite, the paranoia psychedelics can generate is not confined to people on a bad trip. “They’re very threatening substances to institutional power, whether it’s religious institutions or the state,” Pollan said.