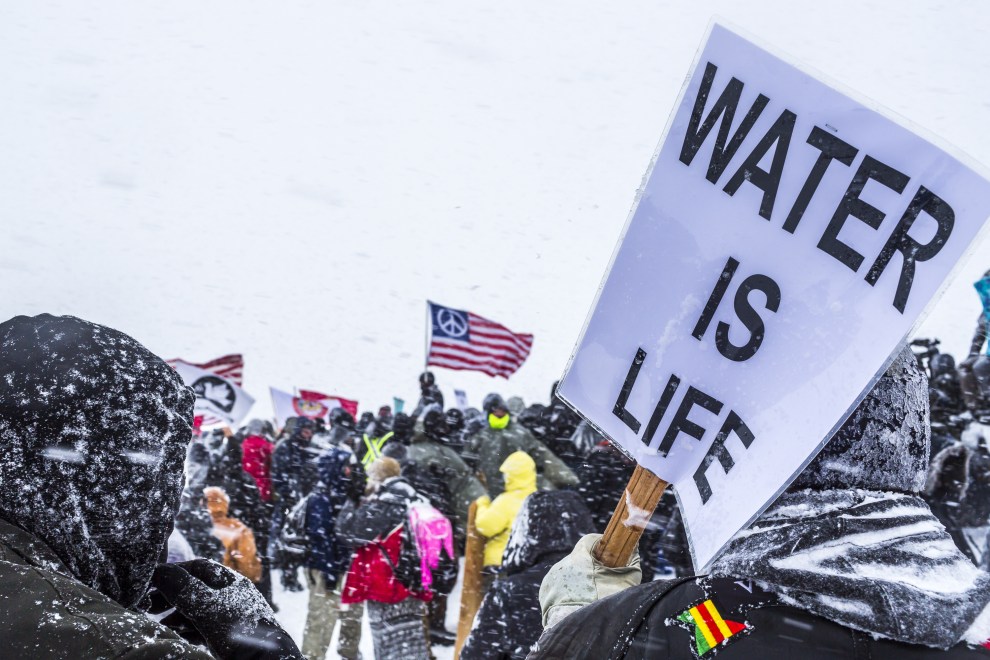 Protesters rally in December against the Dakota Access Pipeline.Michael Nigro/Pacific Press via ZUMA

Environmentalists and social justice advocates scored long-shot victories during the Obama years when they successfully pressured the administration to block construction of the Keystone XL and Dakota Access pipelines. But it turns out those victories may be short-lived.

On Tuesday, President Donald Trump signed an executive order and several presidential memorandums to move along the two projects.

The executive order lays out a process by which the administration will identify “high priority infrastructure projects” and undertake an expedited review. The Keystone memorandum invites TransCanada, the pipeline operator, to resubmit its application for approval and promises an expeditious review by the State Department. Trump told reporters at the White House, “We are going to renegotiate some of the terms” of the Keystone XL project, such as requiring that the steel be made in the United States.

The Dakota Access memorandum encourages the Army Corps of Engineers to revisit its decision from December to halt construction along the project’s original route while an environmental review was carried out.

Much remains unclear about what exactly the new orders will mean for the Dakota Access Pipeline—which sparked controversy in large part because it was slated to cross Lake Oahe near land owned by Standing Rock Sioux Tribe—and Keystone, which would have required a federal permit to cross the US-Canadian border and transport tar sands crude oil to the Gulf Coast.

EarthJustice, the group that has represented the Standing Rock Sioux Tribe, said it does not plan to immediately file a new lawsuit but that if the Army Corps of Engineers does reverse its decision, the group “will likely seek court review.”

Presumably the next step for the 1,179-mile Keystone XL will be for TransCanada to resubmit its application to the new administration. There are two ways Trump could greenlight Keystone from there. He can eliminate the need for a National Interest Determination, which would involve the State Department collecting information from multiple federal agencies about whether the project is in the national interest. (The Obama administration previously declared that the project did not serve the national interest.) Or he and his Secretary of State could simply reverse the Obama ruling and declare that building the pipeline is indeed in the national interest.

Though Trump is clearly hoping for construction to begin quickly, environmentalists are already making plans drag the process out. Jane Kleeb, who runs the Bold Alliance and opposes Keystone, noted that TransCanada doesn’t yet have the land it needs to complete the pipeline. “We are headed to the courts to challenge the right to use eminent domain,” Kleeb said.

This story has been revised to include additional developments.