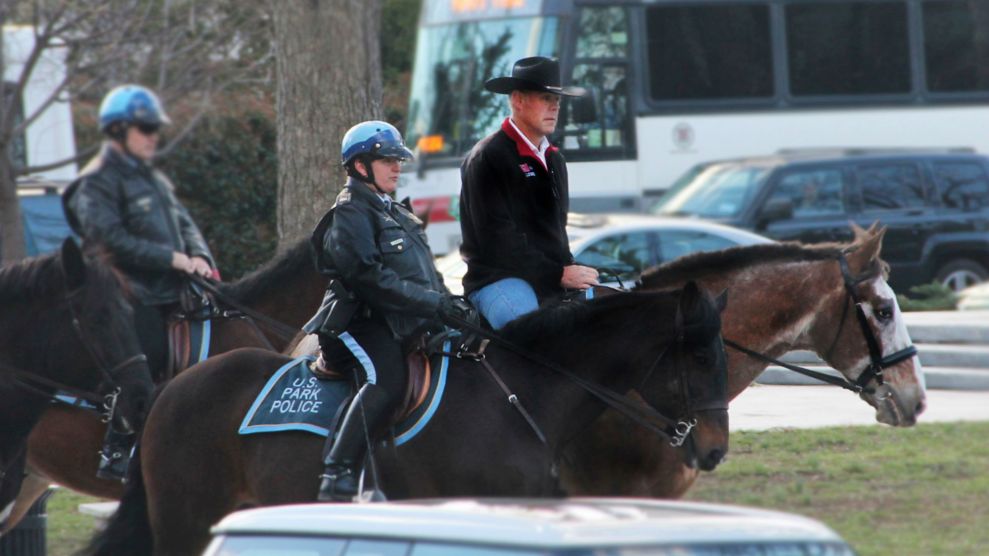 Interior Secretary Ryan Zinke arrived for his first day of work at the Interior Department in Washington, D.C. riding Tonto, an 17-year-old Irish sport horse, and then proceeeded to sign two orders that showed his support for the sportsmen community.Interior Department

Amid the flurry of Trump administration appointments in recent months, Secretary of Interior Ryan Zinke was one of the less controversial. The former Montana congressman says climate change is not a “hoax” and federal lands should not be transferred to states en masse. His January Senate confirmation hearing went fairly smoothly, with none of the major gaffes or arguments that have plagued other appointees’ hearings. So far, his stated priorities for Interior have been vague but unsurprising: rebuilding trust between the public and the department, increasing public lands access for sportsmen, and improving outdated infrastructure at national parks. But considering the controversial issues embedded in those priorities he’ll soon have to wrangle, the ride won’t stay smooth for long.

One way Zinke could increase public land access is to push for more money for the Land and Water Conservation Fund.

Perhaps the biggest questions around Zinke’s Interior are how he will balance a mining and drilling-friendly agenda with habitat conservation and access to public lands, as well as how he will achieve his priorities if President Donald Trump follows through with major budget cuts.

On March 2, his first day in office, Zinke signed two secretarial orders that swiftly reaffirmed his allegiance to the sportsmen community. One order aims to create more access to public lands for hunters and anglers. Sportsmen’s groups like the Theodore Roosevelt Conservation Partnership have lauded the gesture at a time when an increasing amount of public land blocked off by private landowners who control access points. “Sportsmen access is a huge issue,” says TRCP President Whit Fosburgh, who adds that one of the biggest reasons hunters quit the activity is loss of access.

One way Zinke could increase public land access is to push for more money for the Land and Water Conservation Fund — a repository created by Congress in 1964 to use royalties from offshore oil and gas to protect land and water. “It’s the number one access tool we have in this country,” says Backcountry Hunters and Anglers Director Land Tawney. “Ninety percent of its funds are used on access.” Though Zinke supported permanently reauthorizing the LWCF as a congressman, Congress has kept it chronically underfunded for years.

Zinke’s secretarial order also calls for more emphasis on wildlife conservation, though details were slim. While the hook-and-bullet crowd is pleased with the attention to preserving habitat, another one of Zinke’s priorities may counteract it: energy development. Zinke has supported oil and gas drilling and mineral extraction on public lands. In his confirmation hearing, he said, “President-elect Trump has declared energy dominance to be a strategic economic and foreign policy goal of the United States and that he intends to unleash America’s $50 trillion in untapped shale, oil, and natural gas reserves.” Zinke has already opened 73 million offshore acres in the Gulf of Mexico for leasing. In the rural West, accelerated energy development could do irreparable harm to wildlife migration corridors and habitat. “That’s what makes us nervous,” Tawney says.

Zinke has supported oil and gas drilling and mineral extraction on public lands.

Whether Zinke is able to encourage wildlife conservation will also depend on Interior’s new budget. The Trump administration reportedly wants to cut 10 percent of Interior’s budget for fiscal year 2018. That would mean potentially fewer funds for habitat projects such as restoring streams or clearing invasive species. And at a time when an enormous amount of resources must be dedicated to fighting wildfires, such a budget cut would be devastating. “It’s crazy to think you can keep cutting budgets and be good stewards of the land and be the next Theodore Roosevelt,” Fosburgh says.

Lola and I found Teddy at an estate sale in Indiana. He’s been in all my offices since. pic.twitter.com/Fp3uQXbUgc

Another priority in Zinke’s Interior will be to address the $12.5 billion backlog of needed infrastructure repairs at national parks. The secretary has said he hopes to seek funding through Trump’s anticipated federal jobs and infrastructure bill.

One of Zinke’s top priorities may be one of the most slippery: restoring trust in the Department of Interior among an angry set of Westerners who have deep-seated distrust in federal government. To a large crowd of Interior staffers in DC earlier this month, Zinke portrayed the distrust of his department as a result of managers and rangers lacking the proper tools or authority to make decisions in the field — a problem he vowed to help fix. During his confirmation hearing, Sen. Ron Wyden, D-Oregon, asked Zinke how he will protect agency employees “in an era where hostility toward federal lands and federal officials is rampant, particularly in rural areas.” Zinke responded: “As someone who has led soldiers in combat, I am committed to the safety of the Department’s employees. I am also committed to restoring trust by freeing up our employees to make decisions and to collaborate with local law enforcement if things get difficult.”

Other issues the new Interior secretary has commented on in recent weeks include Native American rights. Zinke told the Senate Committee on Indian Affairs last week that “one thing is very clear: sovereignty should mean something.” The National Congress of American Indians has commended his attention to Native American issues thus far. The secretary also signed an order reversing an Obama administration ban on lead bullets meant to protect California condors, eagles and other scavengers that can be poisoned by such ammunition.

There’s still a lot we don’t know about what a Zinke-led Interior will look like. He has been quiet on how he will combat climate change as the head manager of a fifth of the nation’s landmass, in contrast to his two predecessors, who created climate research centers and pushed renewable energy. Zinke has also said he will conduct a “bold” restructuring of the Interior Department, though details on that are so far nil.